Lenovo significantly downsizes Motorola, cuts may be more than 50% of workforce

It looks like another round of cuts is headed for Motorola. Lenovo today confirmed that less than 2% of their 55,000 (less than 1,100) workers have been laid off as part of a strategic resource action.

These layoffs happen, but when it happens with Lenovo it tends to be heavily slanted against their Motorola Mobility subsidiary. The company didn’t have any exact figures to give in terms of who has been laid off, but a report from Droid-Life suggests all the cuts happened at Motorola’s Chicago headquarters.

The report goes on to suggest that as much as 700 or more employees may have lost their jobs, which would be more than 50% of Motorola’s previous workforce of 1200 people. It doesn’t sound so bad when you say less than 2% of your total company is being let go, but they surely didn’t want to admit that they’re heading toward a near-full evaporation of an entire subsidiary.

Unfortunately, that’s their prerogative and they have all the rights in the world to do it. For their part, Lenovo says they’re committed to maintaining the Motorola Mobility headquarters in Chicago, but there’s no telling if the motive for that maintenance is to transform it into their own North America headquarters after they’ve completely absorbed (or eliminated) Moto. Full statement’s ahead.

Lenovo today announced a resource action impacting less than two percent of its approximately 55,000 employees globally. The majority of the positions being eliminated are part of the ongoing strategic integration between Lenovo and its Motorola smartphone business as the company further aligns its organization and streamlines its product portfolio to best compete in the global smartphone market.

The company is also making adjustments in other areas of the business as part of a continued effort to manage costs, drive efficiency and support ongoing improvement in overall financial performance. While these actions are never easy, they are a necessary part of our continued efforts to ensure long-term, profitable growth across all of our businesses.

Lenovo is absolutely committed to Chicago and we plan to maintain our Motorola Mobility headquarters there. Chicago has a well-deserved reputation for technical excellence and as the hub of our global R&D for our smartphone business we expect to take advantage of local talent to continue developing Moto products there. 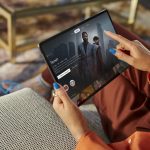