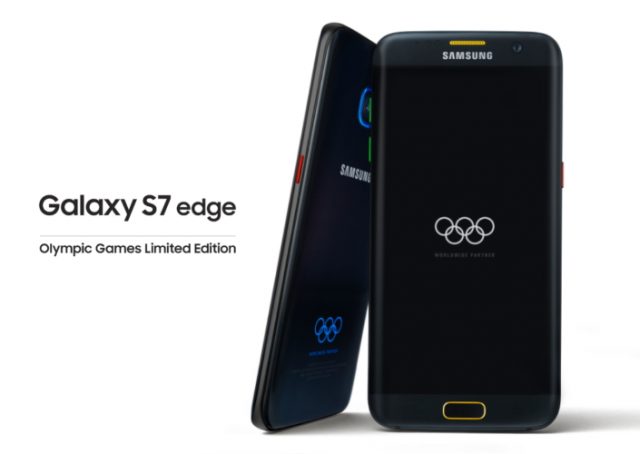 Back in March there were rumors beginning to swirl around a possible Rio Olympic games edition of the Samsung Galaxy S7 Edge. With the Olympic Games getting set to kick off in less than a month, Samsung has taken the wraps off this special edition device. All of the specs will be the same, but there will be a few design queues that celebrate the 2016 Olympics in Rio de Janeiro. However, the first batch will be made available to just Olympians participating in this year’s events.

In collaboration with the International Olympic Committee (IOC), Samsung will deliver 12,500 Galaxy S7 edge Olympic Games Limited Edition and Gear IconX to all Rio 2016 Olympians, helping them to enhance their experiences in Rio and communicate with family and friends around the world more conveniently.

In addition to receiving this special edition Galaxy S7 Edge, athletes will also receive a pair of the unreleased Samsung Gear IconX headphones that will allow the athletes to prepare for the Games without needing any cables and easily syncing their data with the S Health application. As for everyone else who wants to get their hands on this, you’ll have to wait another week or so. On July 18th, Samsung will be making 2,016 devices available for Olympic enthusiasts in select countries including Brazil, the United States, Germany and Korea.

As for the design changes, Samsung is adding a set of Olympic rings to the rear glass panel, and is adding the colors of the Olympic rings to various parts of the device. The home button and earpiece will be lined in a gold, the power button will be red with the volume up and down buttons turned green. Finally, the edge surrounding the camera will feature an Olympic blue that will make the camera bump stand out even more.

The colors of the Olympic Rings will also be prominent in the phone’s user interface in the home and lock screens as well as the message, dial and contact screens and notification bar. Pre-loaded Rio 2016 Olympic Games themed wallpapers will also be available.

Samsung has not stated how these devices will be made available to the lucky 2,016 individuals, but we can imagine that there will be some type of payment required, unless Samsung decides to do an awesome giveaway.