The general rule of thumb for updates on Android devices is two years of updates from a device’s launch date for major OS upgrades. For Google, this is more than just a “general rule of thumb”: it’s a requirement of theirs, with the company guaranteeing updates for devices within 2 years of launch on the Google Store.

The company doesn’t play coy when it comes to that figure, either. They’re straight up showing you when, exactly, you can expect guaranteed updates for your device to end. This includes a separate date for the 3 years of security patches Google committed to. Here’s how the list is looking right now: 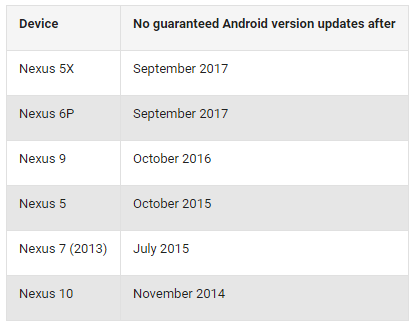 You’ll notice the Nexus 6 is missing from the list. We’ll call it an honest oversight by Google, but we won’t leave out the slim possibility that there’s more to it. If it were there, we imagine its date would be October 2016 as it launched right alongside the Nexus 9. The Pixel C also isn’t here because, well, it’s a Pixel, not a Nexus. We’re not sure what Google’s rules are for that device.

Anyway, you should note that these dates don’t necessarily mean you’ll never receive another update once the calendar turns. The date is simply holding Google to a guarantee, meaning there’s a chance your device could continue to receive updates after this pseudo expiration date.

Beyond that, even if Google does decide to end updates once the guarantee is over, that doesn’t mean your device is dead. You can thank the countless developers who worked to keep devices like the Nexus One updated far longer than Google cared to for that reassurance. 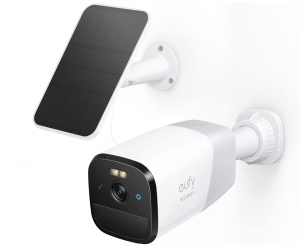