Unveiled today at WWDC, Apple is touting iOS 10 as “the mother of all releases” for the platform. There’s no denying that there are a bevy of new features headed to iOS. Since many of you might have missed Apple’s big keynote (where they also announced MacOS Sierra and WatchOS 3), we figured we’d help bring you up to speed on Apple’s upcoming iOS 10 release and how it compares to some of the Google apps and services found on Android.

iOS 10 brings an entirely revamped lock screen experience. Aside from featuring 3D Touch controls, the lock screen gains a new card-based UI, similar to what we see on Android. Swiping to the right also pulls up a section dedicated solely to widgets, something Android introduced eons ago, but later removed (probably because nobody was actually using it).

Apple is also adding the ability to Clear All notifications in iOS 10. It sounds crazy that it wasn’t possible to clear every notification on the device, instead you had to clear groups at a time by day. It’s something that’s been available in Android since its inception and we can’t imagine how although Google removed this functionality in developer previews (Android L, specifically), it seems it was little more than a odd oversight.

Raise to wake is a new feature in iOS 10 that turns on the display of your device without having to press a single button whenever you pick it up. Also known as Ambient Display on Android, it’s something that was added back in Lollipop and a great feature for checking on new notifications.

Apple’s QuickType keyboard is also gaining some new features. With Deep Learning, Apple’s keyboard will be able to offer even more intelligent suggestions based on the context of your messages. This means if someone asks your location, you’ll find a “send your location” button already available. We’ve seen this specific location suggestion in Hangouts, but we’ll admit, Apple’s integration within the keyboard itself is nicer although Google has already announced a messaging app called Allo that looks to bring many of these intelligent features to messaging on Android and iOS.

The new Photos app in iOS 10 now features facial recognition, making it easy to search for people just by their name. Just like we’ve seen in Google Photos (which is available on both Android and iOS), it will also identify objects in a photo, allowing to search through your archives in a snap. Apple also uses advanced AI to surface memories most relevant to you, combining them into movies and albums for easy sharing. Again, these are all features we’ve seen in Google Photos which we might add, also feature unlimited high-quality photo backups.

Apple Maps is getting an all-new design for iOS 10 with slide up suggestions that show you how long it will take to get to work, or the ability to filter down places like restaurants by the type of food (seafood for instance). Navigation also shows you traffic information for your route and can dynamically re-route you to keep you out of it. You can also search for additional stops along your current route. If this sounds familiar, it’s because Google Maps has had you covered since they bought Waze several years ago.

The biggest change coming to Maps 3rd is that it’s now open to developers. With 3rd party app support, users can use “Extensions” to search for nearby restaurants, place a reservation using OpenTable, book a ride using Uber, pay for it using Apple Pay, and see the status of the Uber — all within Maps. You know, everything you could already do in Google Maps.

The stock Phone app in iOS 10 is gaining some new abilities as well. With voice mail transcriptions (beta) and new support for 3rd party apps, it’s a lot more feature rich than previous versions. While the ability for 3rd party apps to tell you if you’re receiving call spam is nice, but the stock Google Phone app also has caller ID for businesses and using Google Voice (or Project Fi), you can get voice mails transcribed for you as well. Once again, something that’s been available for quite awhile now.

Okay, we’ll admit — iMessage on iOS 10 is pretty slick. With loads of new features like rich links, inline video, emoji predictions, Tap Back, and handwritten messages, Apple is definitely taking the kitchen sink approach to messaging. There’s not too much here we haven’t already seen with apps like Facebook Messenger — including in integrated 3rd party app store — but most of these new features can be found in Google’s upcoming smart assistant/messaging app, Allo. While Apple is still playing catchup (since neither are available yet), we’ll have to see who provides a better messaging experience. Apple still has a slight leg up on the competition with end-to-end encryption for privacy nuts.

It wasn’t announced, but users quickly discovered the ability to uninstall some of Apple’s stock apps in iOS 10. Of course, not all apps. Phone and Messaging are a few apps that, understandably, can’t be removed, but apps like Notes, Mail, and Stocks can finally be uninstalled completely from the device. The difference between Android and Google’s approach is that if you uninstall an app like Mail on iOS 10, there’s no way to change the default app to a 3rd party one (meaning a mail:to link will forward you to the App Store to reinstall Mail). This could change once iOS 10 officially releases later this year, but nothing has been announced.

Google recently reduced the number of mandatory — uninstallable — apps on Android, allowing users to uninstall apps like Google Play Books, Play Games, and Newsstand, while a handful of OEMs have also followed suit with a few system apps of their own. Like Apple, it’s not every app and while you’ve been able to disable any app on Android since Ice Cream Sandwich, it’s still on your phone taking up storage space. We’ll admit, it’s not entirely the same and we’d love to see Google take Apple’s lead on this one.

A few smaller things Apple mentioned briefly that we already have in Android is a new collaboration feature for Notes (something we saw added to Google Keep back in 2014), Live Photos editing with stabilization (Google actually beat them to it with Motion Stills, which launched last week), and split view in Safari on the iPad (multi-window Chrome tabs are arriving in Android N). 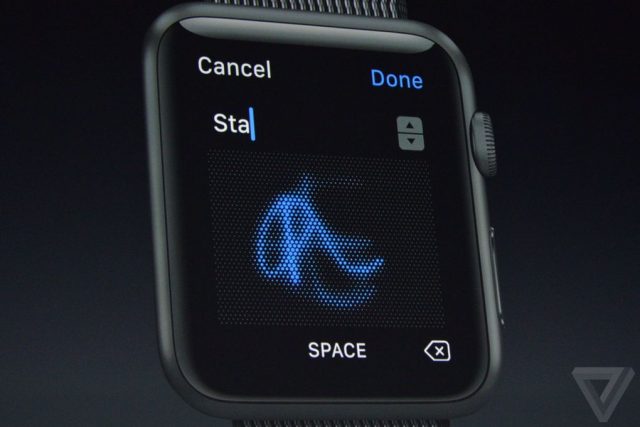 Apple also showed off WatchOS 3, the latest version of their smartwatch OS for the Apple Watch. Previous versions of Apple Watch were a little rough around the edges, but the new version promises to be faster and gives users the ability to change watch faces directly from the watch. There’s also the ability to reply to messages by writing out letters — all features shown off in Android Wear 2.0 at Google I/O 2016.

Now, of course every platform has its strengths and weaknesses and both do their fair share of “copying” one another (granular permission controls in Marshmallow for instance). We’re not saying there’s anything inherently wrong about it, this is just how technology evolves. Android has long been one of the most open OSs in the world, a philosophy Apple seems to be warming up to, at least when it comes to some of their apps.

We still think iOS has a long way to go before it can ever reach Android’s level, but again, each operating system has its pluses and minuses. As technology lovers first and foremost, a little friendly competition is almost always a good thing.

iOS 10 is available this fall for everyone, while the public beta goes live next month.