The Samsung Galaxy S7 Edge is easily one of the hottest phones around. With a gorgeous 2.5D curved display and all glass back — it also happens to be one of the most fragile. Needless to say,  you’re probably going to want to keep your device protected whenever you venture out of the house. While there are plenty of 3rd party case options (we’ve taken a look at many of them already), some people like to stick to OEM accessories.

Today we’re taking a quick look at the LED View and S-View Flip covers from Samsung, official cases which offer a few neat little tricks up their sleeves outside of normal device protection. Special thanks to MobileFun.com who so graciously supplied us with these official cases from Samsung. Let’s take a look. 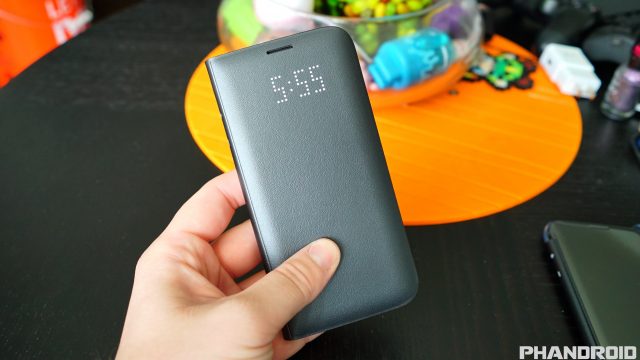 The official Samsung LED View Cover is one of the more interesting cases we’ve seen in recent years (outside of HTC’s Dot View cover thing). As the name suggests, the case has a small section where LEDs light up to show different notifications. Only Samsung’s core apps are supported, with the LED Cover showing time, music playing, incoming/unread messages and calls, volume control, low battery warning, and when the battery is being charged.

Because there’s no way to charge the case (at least not that we could see), the LEDs aren’t lit up indefinitely. Instead, they only show for a brief amount of time when closing the case or pressing the power button while the case is closed. The LEDs aren’t just for show either, they’re actually touch sensitive, allowing you to interact with some of the notifications, like answering calls or turning off alarms. This can all be done without having to open the cover for added convenience.

The case itself is mostly premium, featuring a faux leather finish that almost makes the phone look like a tiny book when closed. The front flap gently curves around the edge of the phone, where it sits fully flush around the curved display. The flap also has a magnet to wake/sleep the phone when you open and close it.

Inside, a small pocket can store a single card (possibly more), although we’re not sure if we’d recommend it. Having something hard and plastic like that rubbing against the display just doesn’t seem like a good idea.

It’s definitely a nice, professional looking case for the S7 Edge and with the ability to perform a handful of functions while the cover is closed, it should offer enough protection should you throw your phone inside a backpack or purse. At around $60, it’s a pretty expensive little case, but one with more style and features than we’re generally used to. Buy links provided below. 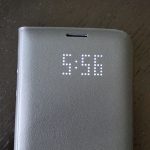 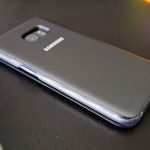 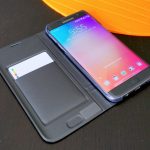 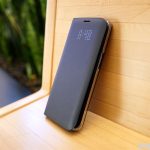 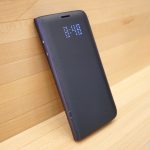 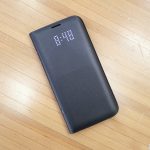 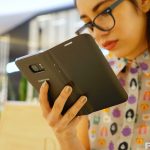 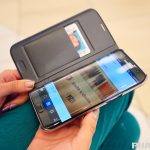 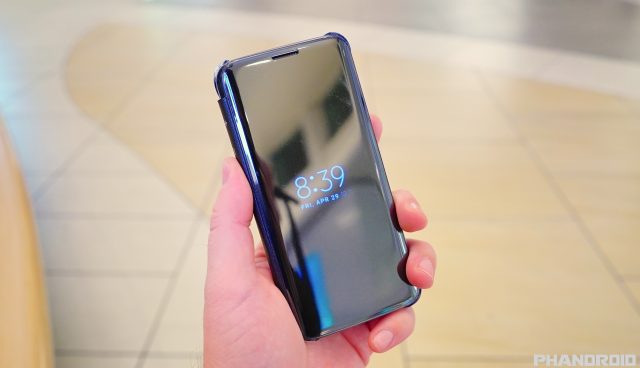 On the surface, the S-View Clear Cover doesn’t appear to be anything too special and looks nearly identical to the model made for the Galaxy S6/S6 Edge. But Samsung’s made some key improvements. First off, the case no longer sits completely flush against the display, something that caused marring on the older version. The front cover is still semi-transparent and a tiny magnet inside wakes and sleeps the phone when opening/closing it.

Like the LED Cover, you can interact with your phone while the cover is closed to do things like answer calls or silence alarms. While those functions worked well enough, we had trouble doing some of the other things you’re supposed to do while the cover is closed. Expanding messages/missed calls, access quick camera/video recording, favorite contacts, as well as access settings and app notifications never quite worked correctly. For us it was just answering calls, silencing alarms, and the music player widget that appeared while the case was closed, which was still pretty neat given those are typically things you’d need to address in a hurry.

We also like that the case is actually quite thin and that the inside is lined with the vinyl. This means you wont have to worry about the case scratching up the back glass of the S7 Edge. The case doesn’t offer as much protection as the LED Case (the sides are completely exposed in addition to the top and bottom) but the case does offer protection against scratches should you keep your phone in a backpack or purse. Just don’t go expecting too much in terms of drop protection (unless it lands at just the right angle).

At $50, it’s a tad on the expensive side and even though it’s mostly made of plastic, it does offer a little more functionality than the LED View case we took a look at above (there are more widgets and items that can be interacted with while the cover is closed). You’ll find buy links provided below. 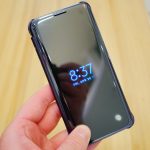 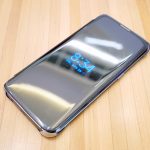 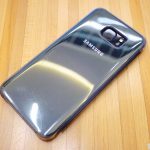 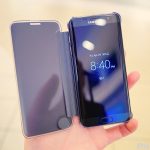 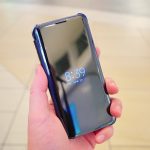 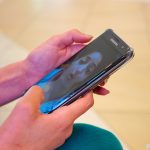 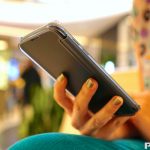 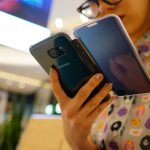 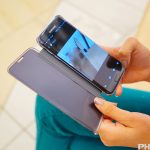 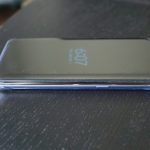 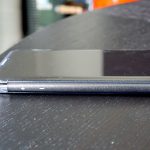 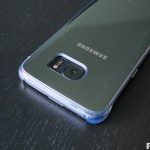