The state of wearables in 2016 can be boiled down to two types of devices: smartwatches and fitness trackers. Most smartwatches attempt to be fitness trackers, but if you’re serious about fitness, you still need a dedicated device.The Moto 360 Sport is designed to bridge the gap. It’s a smartwatch that puts fitness first, not just a tacked on after thought. Can the Moto 360 Sport bring fitness to Android Wear? Let’s find out. 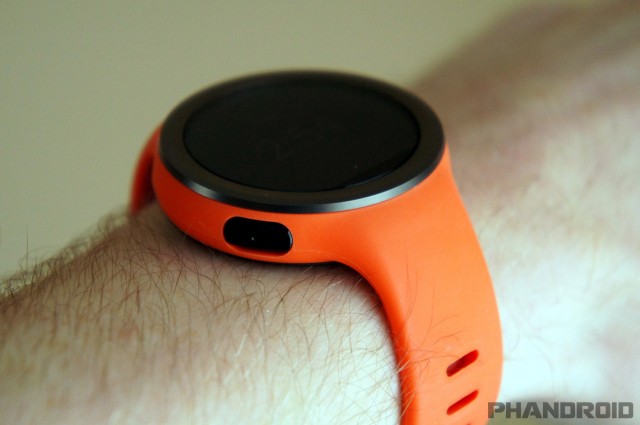 The Moto 360 Sport looks like what you’d expect a fitness device to look like. It has a sweat-resistant silicone band and a slightly raised metal bezel. The silicone used in this band is very smooth, almost like velvet. It has the perfect amount of elasticity, which makes for a great fit on your wrist. The Moto 360 Sport is easily the most comfortable smartwatch I’ve worn.

In the 2 o’clock position is the standard Motorola button. It’s a very solid-feeling button. You can actually hear it click when you press it. The silicone surrounds the button and all sides of the device (save for a microphone cut-out). It’s not possible to swap out the band for a different color. It comes in black, white, and orange. You’re not going to want to swap for a different material, but it would be nice to have more color options. 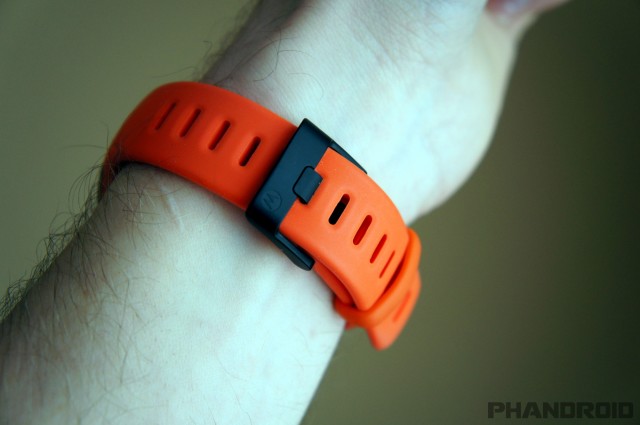 Inside the watch is a 1.2GHz Snapdragon 400 processor, 4GB of storage, and 512MB of RAM. For the most part, this is a speedy device, but there are definitely moments of lag. Performance is on par with any other Android Wear device. It gets the job done. That’s the story of the overall design, as well. We wouldn’t call it the most attractive smartwatch, but for a fitness watch, it looks great. 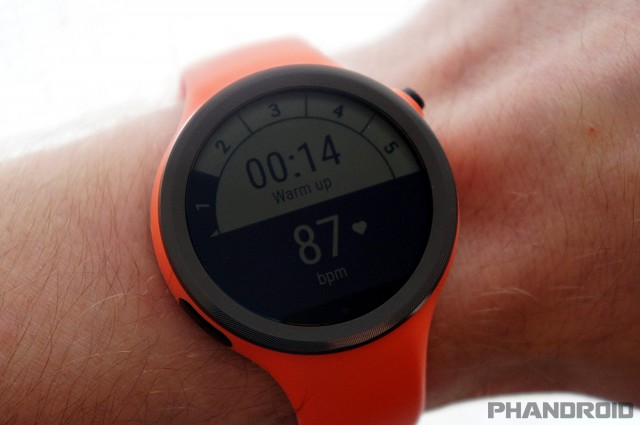 The display is 1.37-inches with 360×325 resolution. Motorola calls it the “AnyLight” display. It’s a hybrid LCD panel that reflects natural light so it can be more readable outdoors. There’s a layer of reflective material underneath the display. When bright light is detected, the display switches to a monochrome color scheme. The “white” pixels are actually transparent, which allows the reflective layer to show through those spots.

The AnyLight display works amazingly well outdoors. It’s easy to read the display in even the brightest of light. In fact, since it’s reflecting light, the display is sometimes easier to read outdoors than it is indoors. When the display is active, it uses the traditional full-color LCD with backlight. Ambient mode uses the reflective layer, which doesn’t use the backlight. This makes it really hard to read the ambient display when you’re in a low-light situation because there’s no light reflecting off the display.

Even considering the woes with Ambient mode, the AnyLight display is awesome. Outdoor visibility is great when you’re running outside, but it’s also nice to have when you’re just walking to your car. 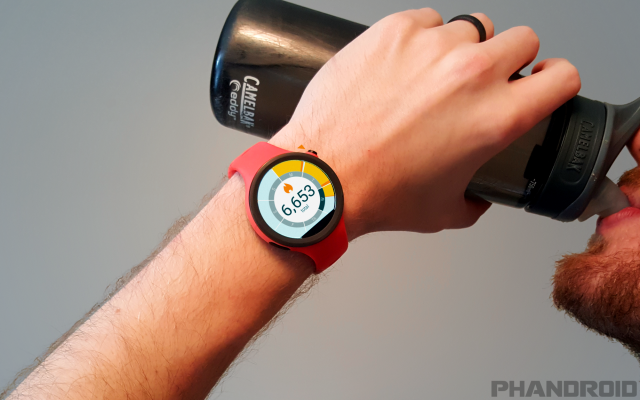 Before we dive into fitness features, let’s talk about the software. The Moto 360 Sport is running Android 5.1.1 out of the box. Android Wear works the same on this watch as it does on every other Android Wear device. You can change the watch face, read notifications, do voice commands, and all that good stuff. For this review, we’ll be focusing on the fitness aspects of the software.

For the majority of this review, we’ve been calling the Moto 360 Sport a “fitness watch.” In reality, it’s a more of a “running watch.” Motorola has included two special apps for the Moto 360 Sport: Moto Body and Moto Running. You can use these apps to record your heart rate, track your steps, and start a run. But that’s it. If you want to track a bike ride or a hike, you’ll need a 3rd-party app. The good news is Moto Body can connect with a few popular fitness services. 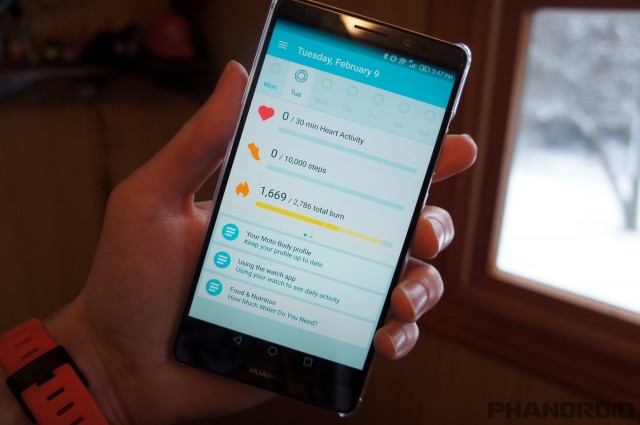 The last bit of fitness goodness is the built-in GPS. You can go on runs and track your distance without carrying around a phone. If you use supported 3rd-party apps, you can use the built-in GPS to track other activities as well. We found the GPS to be just as accurate as our phone, but it does deplete the battery quicker. Most of us have big phones these days, so it’s very nice to not have a heavy device swinging in your pocket. 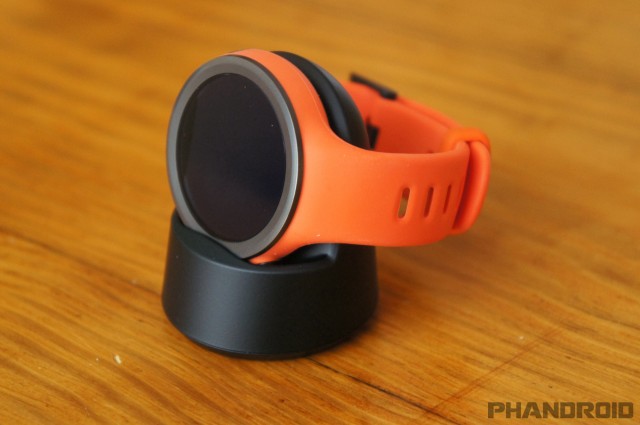 Battery life is a big concern when it comes to smartwatches. The original Moto 360 had notoriously bad battery life, but the second generation is much better. The Moto 360 Sport has a 300 mAh battery. I’ve been impressed with the battery life on this watch. On most days I’m putting the watch on the charger at night with around 30-40% left. That’s with “always-on” display and “tilt to wake” enabled.

The great thing about the reflective display is you can keep the display on at all times and lose very little battery life. We already talked about how ambient mode doesn’t use the backlight. This makes it hard to read in some situations, but it’s also great for battery. Now, if you go on very long runs you’ll find battery life will take a hit. The fitness tracking sensors use more battery life than if you’re just sitting at your desk. 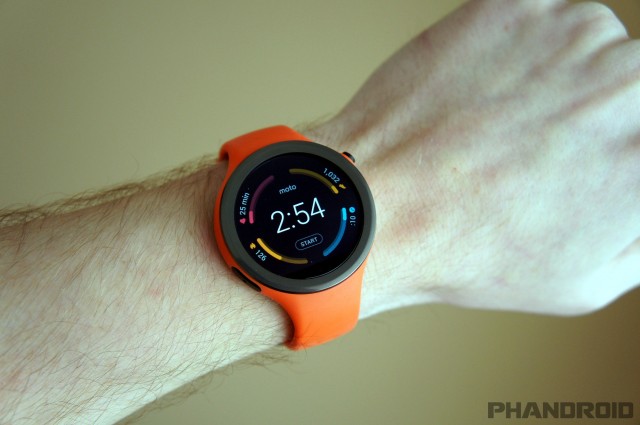 The AnyLight display and built-in GPS should be enough for most fitness geeks to appreciate this watch. Motorola’s running-heavy suite of apps are nice, but it’s not mandatory to use them. Any number of fitness apps in the Play Store can be used to count steps, record heart rate, and track activities. This is a device that’s a lot smarter than your average Fitbit, and when you’re not running, it’s a fully capable smartwatch to boot. It’s not the perfect marriage of smarts and fitness, but it’s darn close.

The Moto 360 Sport is Android Wear’s first major attempt at a full-blown fitness tracker. Motorola has done a great job with the hardware features, but non-runners may find the fitness apps lacking.