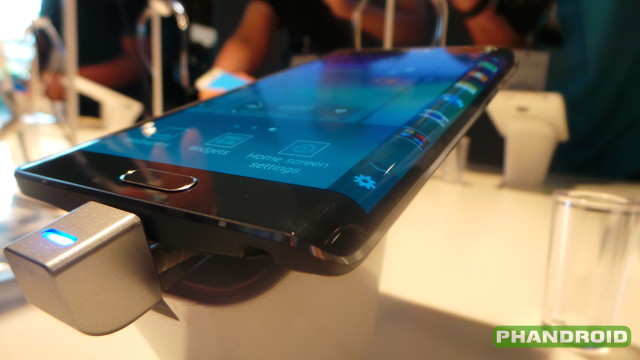 Samsung has just announced that the Galaxy Note Edge will officially be launching in the United States beginning on November 14th. The company didn’t give any specifics as to who would be launching it that date, but we do know all four major United States carriers are planning to offer it at some point.

The Samsung Galaxy Note Edge isn’t quite that dissimilar to the Note 4 (which you can read about in our review). It houses many of the same specs under the hood, including a Snapdragon 805 chipset, 3GB of RAM, a 16 megapixel camera and more. The difference is in the form factor and display — this thing folds over to the side and gives you an independent strip of viewing notifications, quick controls and more. It’s a really unique feature, though time will tell if it’s less of a game changer and more of a gimmick.

We’ll be tracking down information on individual carrier plans for launching the device in the moments to come, but let us know if you’re planning on giving what Samsung considers an “exploratory” release a shot once it’s finally available.

[Update]: AT&T has officially announced plans to have the device in-store on November 7th at select retail locations. The device will only be available for demo purposes, though, so you won’t be able to walk out of the store with one that day.

If everything goes according to plan, though, they should be one of the potential few carriers offering the device on the November 14th release date set by Samsung (especially since they’re bragging about how they were the first to offer the Samsung Galaxy Note 4 in that very same press release).