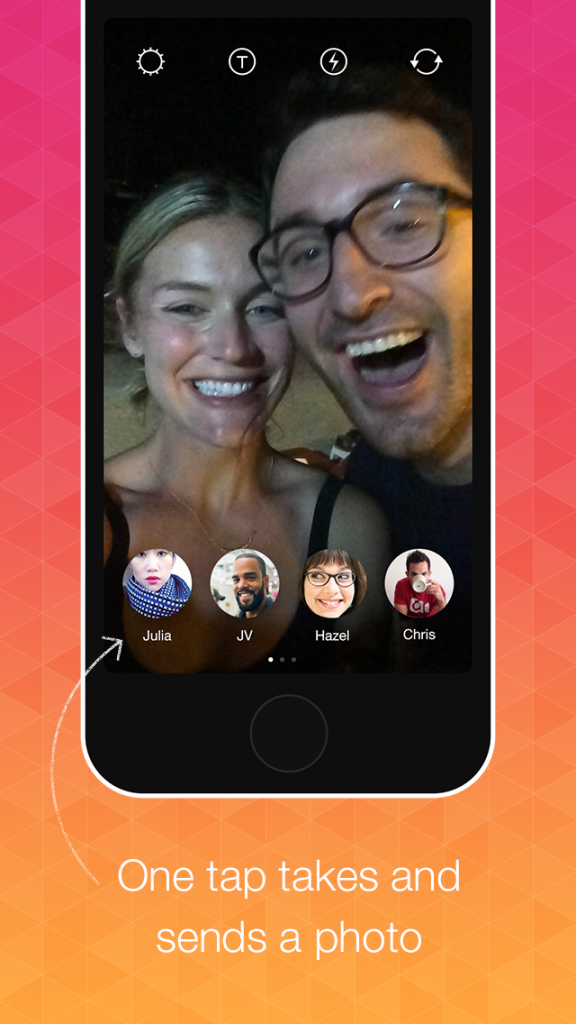 After leaking out ahead of time via an in-app banner ad, Facebook-owned Instagram is finally ready to reveal their latest project: Bolt. Joining the current trend in the plethora of mobile messaging apps already available, Bolt looks to take on heavy weights like Snapchat, while stealing the best ideas from apps like Taptalk.

The app looks to offer a way for quickly messaging friends with photos without the down time. In fact, things are handled so quickly, the app effectively replaces the shutter button with the face of your friends you’d like to share a photo with. There’s no way to share the same photo with multiple people, meaning you’d have to snap a whole new picture using the in-app camera (no gallery uploads allowed). Video is done by simply holding on your friend’s face/shutter button.

Once a received photo is viewed, it’s gone forever. One particularly neat feature is the ability to “undo” a sent photo by quickly shaking your phone after a photo has been taken. This should help avoid any embarrassment should you have accidentally tapped the wrong person’s face with your junk exposed. Also interesting is accounts use your actual phone number — not your Instagram or Facebook account — meaning you should be able to quickly access everyone in your contacts.

The app is seeing an official soft launch today and where we’d like to offer you guys a hands on or images, unfortunately this release is only available to Singapore, South Africa, and New Zealand. Instagram says they want to make sure they can scale things accordingly in other parts of the globe first, where 65% of their user base currently resides.

A few weeks back, we saw a survery showing only a very small percentage of Instagram users taking advantage of their newly rolled out Direct Messaging feature. We’re not sure how well everyone will take to Bolt (some companies are peeved about the name), but in the search for that next best thing, you can’t really fault them for trying.