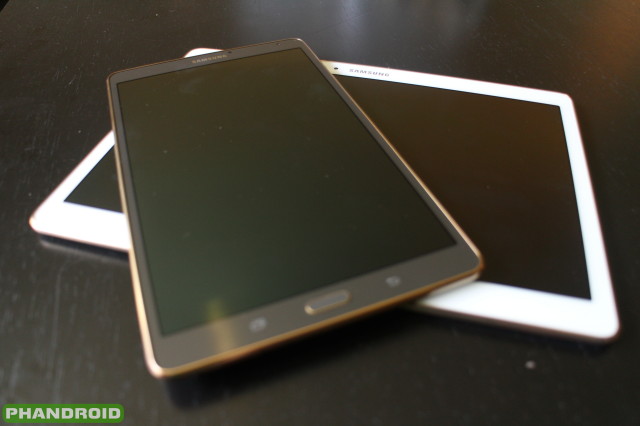 Samsung has finally crafted a tablet deemed worthy of the ’S’ branding so far only associated with the company’s flagship smartphone line, and it’s easy to see why. The Galaxy Tab S offers a compelling feature set — including a stunning Super AMOLED display — at a competitive price for both its 8.4 and 10.5-inch variants, a mix that Samsung has struggled to achieve in the past. Read on for our full review! 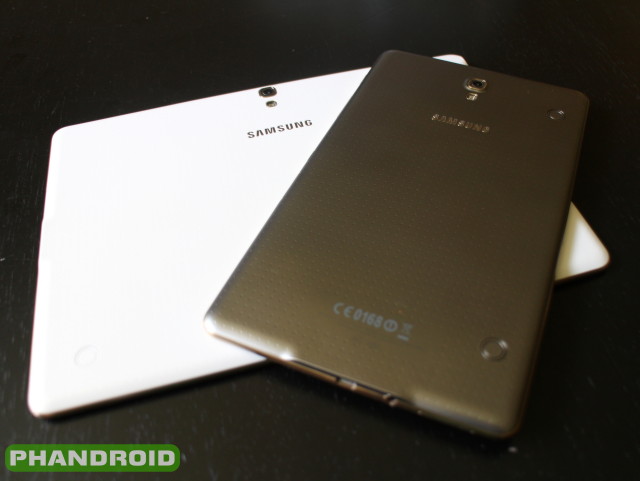 The Samsung Galaxy Tab S takes several design cues from its smaller counterpart, the Galaxy S5. Most notably, the dimpled rear introduced with the GS5 carries over, faux-leather inclinations and all. A home button and soft-touch navigation keys mirror those of Samsung’s premium smartphone. These buttons are arranged for portrait orientation on the 8.4-inch model and landscape on the 10.5-inch Tab S. Regardless, both versions of the slate resemble a Galaxy S5 that has been pulled and stretched to a larger size.

Samsung has added gold accents around the edge of the device to bring a touch of class, and the result is a slate that is truly quite pleasing to look at. For better or for worse, this is about as adventurous as Samsung gets with the Galaxy Tab S’ design.

What is truly impressive, however, is just how thin and light Samsung has made this tablet. Both editions measure 6.6mm at their thickest. This isn’t the thinnest on the market (consider the Sony Xperia Z2 Tablet at 6.4mm), but it’s close enough. The small and large models weigh 294 grams and 465 grams, respectively.

Samsung continues to rely on plastic composite construction for nearly all of their devices, resulting in a set of tablets that doesn’t feel quite as premium as it looks. The build quality, however, manages to translate slightly better to these larger devices that it typically does to Samsung’s smartphone line. 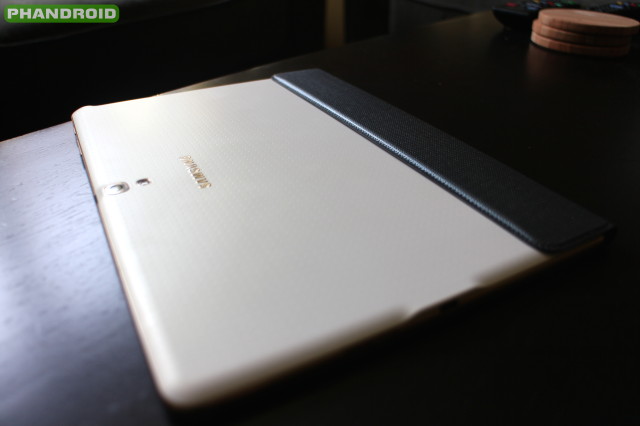 One interesting aspect of the Galaxy Tab S’ design is the inclusion of two attachment points on the rear of the tablet. These circular ports allow for the secure attachment of accessories ranging from folding folio-style covers to Bluetooth keyboards. 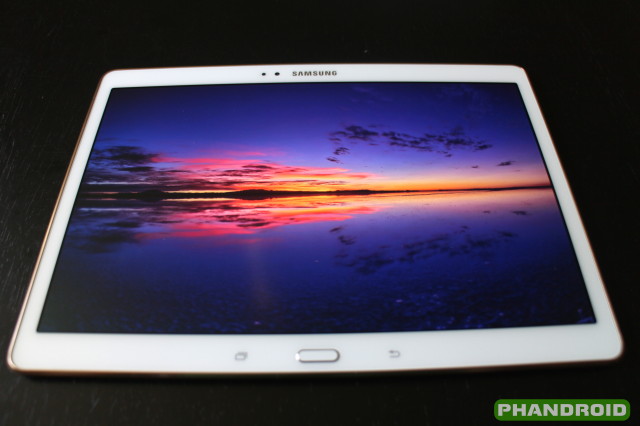 Samsung’s Super AMOLED technology has long been regarded as producing some of the best displays on mobile devices. Most recently, the Super AMOLED display was the cause of much acclaim for the Samsung Galaxy S5. It took Samsung a bit longer to bring the same display to a tablet, but it arrives with the Galaxy Tab S as one of its strongest features. Samsung knows this — the company has based the majority of its Galaxy Tab S marketing on its display.

The company isn’t wrong in doing so, as the Super AMOLED displays of both the 8.4 and 10.5-inch Galaxy Tab S models are some of the best you can expect from a tablet. Both sizes sport WQXGA resolutions of 2560×1600 pixels and provide rich, vibrant colors and the deep contrast that has become expected of AMOLED displays. Samsung promises users can expect a color palette blanketing 90 percent of the Adobe RGB standard (versus the 70 percent of a traditional LCD) and a contrast ratio 100 times greater than that of the typical smartphone and tablet display.

The Galaxy Tab S’ Super AMOLED display is further enhanced with what Samsung is calling “adaptive display” technology. The gist is a screen that automatically optimizes presentation depending on the app (whether it be a movie, eBook, or web page). The limitation to this feature is that adaptive display only applies to seven pre-installed apps. In all other instances, users can choose between three screen modes: AMOLED Photo, AMOLED Cinema, and Basic Mode. The selected mode will then apply tablet-wide to all apps and services.

The result is about what you would expect: a display on par with that of the Galaxy S5 and other AMOLED devices. It looks great, but it comes with the caveat that is often applied to AMOLED technology specifically. The vibrant color reproduction and deep contrast can often lead to an image that seems artificially enhanced and not true-to-life. That shouldn’t be taken as a knock on the display, but there is a reason they say beauty is in the eye of the beholder. For some the Super AMOLED might be a bit much, but for most it is a perfectly enjoyable display, if not one of the strongest on the market when it comes to tablets.

Samsung hasn’t raised much noise about the Galaxy Tab S’ hardware, but the device is no slouch. The WiFi-only edition of the tablet runs Samsung’s in-house Exynos 5 Octa chipset, while the LTE model sports a Snapdragon 800. Regardless of the wireless configuration the processor will be served by 3GB of RAM. Combined these two key elements provide strong hardware performance, but it can at times lack in responsiveness. If you throw a lot at the Galaxy Tab S, expect a few hiccups here and there, but overall we had no major complaints.

Beyond the solid processing power the Galaxy Tab S offers several other hardware elements that keep it inline with the latest tablet offerings from the competition, including 802.11 a/b/g/n/ac MIMO wireless. Dual antennas provide more stable connectivity and faster internet speeds when operating over WiFi. It’s one of those little perks that is easy to overlook but hard to miss once, especially for a multimedia-centric device like the Galaxy Tab S. 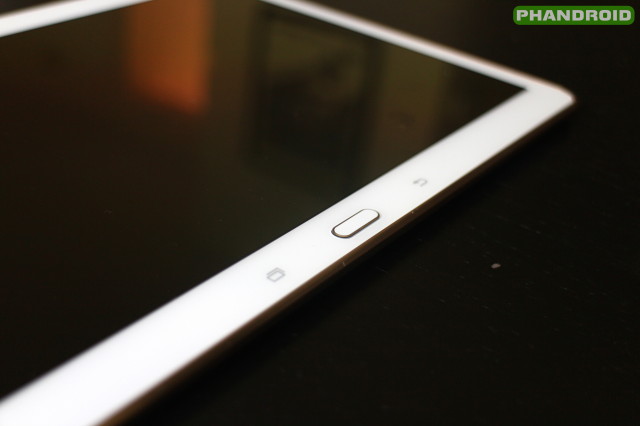 The Galaxy Tab S also takes advantage of the fingerprint scanner technology introduced with the Galaxy S5, allowing users to unlock the device with a swipe of their fingertip as well as interact with other apps and services like Private Mode. While the prerequisite headphone jack is available, users will be pleased to see stereo speakers on the Galaxy Tab S line. Side-mounted, they don’t offer an especially immersive or profound audio experience, but they are suitable enough when it comes to enjoying video and music. 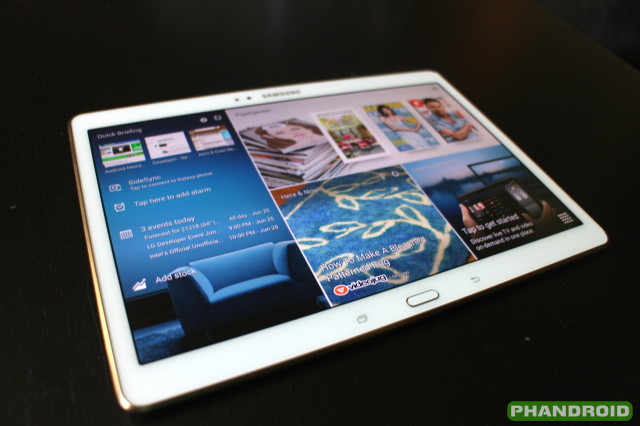 Hardware only goes so far by itself, and Samsung knows this as well as we do. We were glad to see that some attempts were made to provide a unique experience tailored to the form factor, and they paid off. While the Magazine UX on top of Android 4.4 is a pretty standard take on the Samsung experience we have become accustomed to, there are a number of new features that add a layer of utility to the Galaxy Tab S.

For starters, the Quick Briefing pane gives an all-in-one look at your favorite bookmarks, events and alarms, and stocks, as well as magazines via the new Papergarden app plus news and quick access to Samsung WatchOn. It also provides quick access to Samsung’s new SideSync 3.0, easily the coolest new feature of the Galaxy Tab S.

Using SideSync, a user can link a Galaxy smartphone to the tablet, providing complete remote control over the phone. This not only lets you explore the apps and media installed on your phone through an emulated Galaxy interface, but it also will forward text messages and even allow the user to place and receive calls directly from the tablet. This is a killer feature, assuming you own a compatible Samsung smartphone to make it work.

Overall Samsung has done an impressive job putting the Galaxy Tab S’ software to good use. The inclusion of exclusive apps and services, the ability to sync a Galaxy smartphone, and the useful Quick Briefing pane make the slate a worthy companion device for both work and play.

The Galaxy Tab S is equipped with an 8MP rear camera and flash and 2.1MP front-facing camera for both versions of the device. While the setup can provide pretty decent results in ideal conditions (good lighting being key), this is a tablet we are dealing with. Users shouldn’t expect the most impressive images ever captured on a mobile device, but the slate’s camera serves its purpose well. 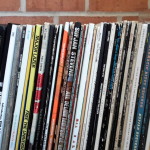 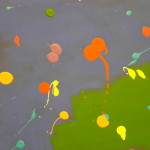 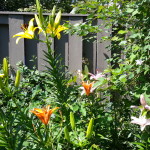 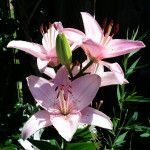 The Tab S’ camera struggled in low light but otherwise offered decent color reproduction and did a good job of focusing in and providing sharp images. Likewise, HD video recording offered about as much as we would expect from a tablet of this class. You can see for yourself in the sample below.

The 10.5-inch Samsung Galaxy Tab S rocks a beefy 7,900mAh battery, and it needs every last drop of juice to keep that power-hungry Super AMOLED display online. Likewise, the 8.4-inch Tab S makes the most of its 4,900mAh battery. Given the circumstances, both perform admirably when it comes to battery consumption.

Samsung advertises that a full charge on either tablet should provide up to 12 hours of video playback, and their claims are surprisingly spot-on. Use the tablet for a mix of other tasks instead of 12 hours straight of video playback and you can expect to uptime in excess of this number.

Just as with the Galaxy S5, Samsung has included software-aided power saving modes to get even more life out of the Galaxy Tab S. These modes dim the display, shut off unnecessary wireless connections, and otherwise alter the tablets performance profile to get the most out of a battery running low on charge. 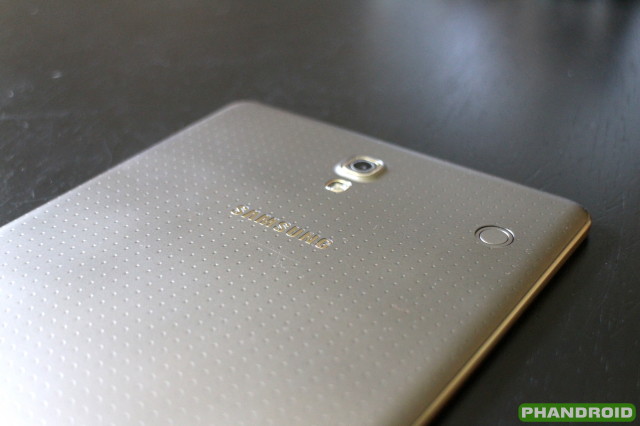 Considering its striking Super AMOLED display, slim design, and strong battery life, the Galaxy Tab S arrives as one of the best Android tablet options on the market. Add to that the fact that the competitively priced tablet will sell for $499 (10.5-inch) or $399 (8.4-inch), a direct strike at Apple’s iPad Air and iPad mini with Retina Display, and you get slate that could challenge for best on the market, period. It took Samsung several years to craft the tablet worthy of appending the ’S’ brand onto, but we’d say the Galaxy Tab S does the name justice and then some.