Earlier today we watched as LG finally took the wraps off their worst kept secret: the LG G3. In an effort to stay competitive with the likes of the Samsungs and HTCs, LG broke away from their usual end of the year release timing, moving up their flagship launch a good couple of months. Hot on the heels of some of the biggest smartphone releases of the year, some of you might be wondering how the LG G3 stacks up in comparison to Android phones such as the Samsung Galaxy S5 and HTC One M8. Well, let’s find out. 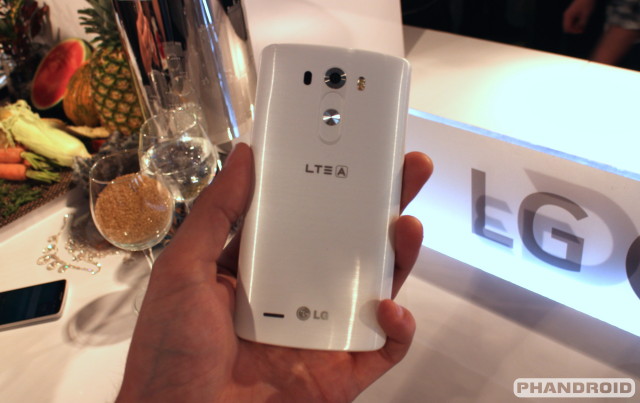 If you’ve been following the mobile scene, you’d know LG is no stranger to the all-plastic design philosophy that made Samsung rich. But that doesn’t mean LG hasn’t dabbled in their use of more premium materials like glass for the LG Optimus G from 2 generations ago. While glass on the back of a smartphone may not have been the wisest choice for a smartphone (they have a tendency to drop), industrial materials like aluminum seem to hold up well. Just ask any HTC fanboy what they love about the Taiwanese OEM’s recent flagships and they’re sure to wax poetic about the premium feeling aluminum build quality.

Taking this idea and running with it, the LG G3 features a polished “metallic” skin on the its removable battery cover. The result is something that can only be described as the love child of the One M8 and Galaxy S5 melding together into one. There’s no question the HTC One M8 will still feel more solid in the hand thanks to a unibody construction, but for those that never took to Samsung’s gratuitous use of chrome and “band-aid” battery cover should feel right at home on the LG G3. 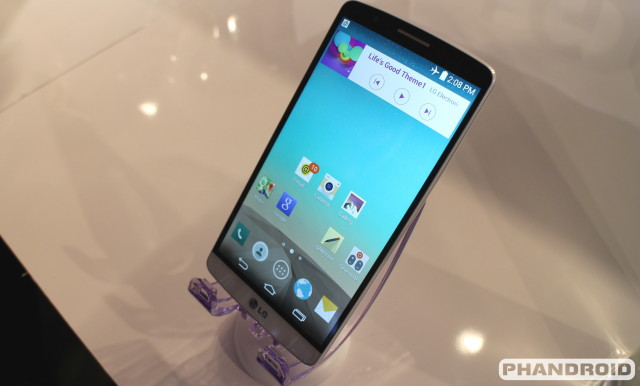 The LG G3 features LG’s latest Quad HD 2560 x 1440 resolution IPS display with an insane 538ppi. Word from our own Kevin Krause is that the display is something that will need to be seen in person to believe, with pixels that are indiscernible to the human eye. Of course for many, they get a similar result from the now standard 1920 x 1080 found on all current flagships. This means no matter the quality — which appears to have excellent viewing angles — the display on the LG G3 could be one of the device’s more superfluous features, one that could have an impact on battery life.

LG did mention that they’ve taken steps to minimize the impact on battery life, but we can’t help but wonder if that could have been put to better use on a 1080p display. No matter how many pixels LG throws into their phones, there’s just no beating Samsung at their own game. While both the LG G3 and HTC One M8 displays look fantastic make no mistake — the SAMOLED display on the Samsung Galaxy S5 is still the one to beat. 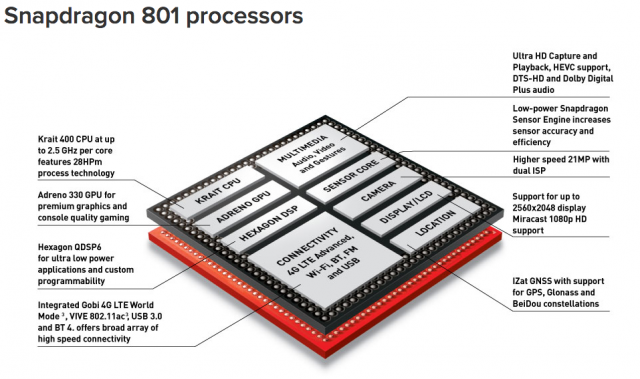 We know it’s easy for some to simply look at the raw hardware specs on a smartphone and declare a winner, but that would be foolish. As we discovered with the Galaxy S5, a beefy processor doesn’t always equate to above average performance (quite the contrary). With the LG G3, the phone features the same Qualcomm Snapdragon 801 processor as the HTC One M8, but like on the Samsung Galaxy S5, LG has managed to crank up the clock speed to 2.5GHz. The result should be an overall zippy Android experience, but we’ll reserve judgment until we get our hands on a review unit.

When it comes to battery, LG doesn’t appear to be messing around, outfitting the LG G3 with a higher-than usual 3,000mAh battery (the One M8 only has 2,600mAh, while the Galaxy S5 features 2,800mAh). As we saw with last year’s model, this should help the LG G3 last more than a full day with average use. But let’s not forget. Both HTC and Samsung have gotten creative with battery life, squeezing out every last drop through the use of software features like HTC’s Extreme Power Saving, or Samsung’s similar feature that also enables a black and white display.

We’ll have to wait and see what kind of battery saving options LG’s new software introduces in the G3, but given the phone already has a removable battery for quick battery swaps, this alone gives it the advantage. 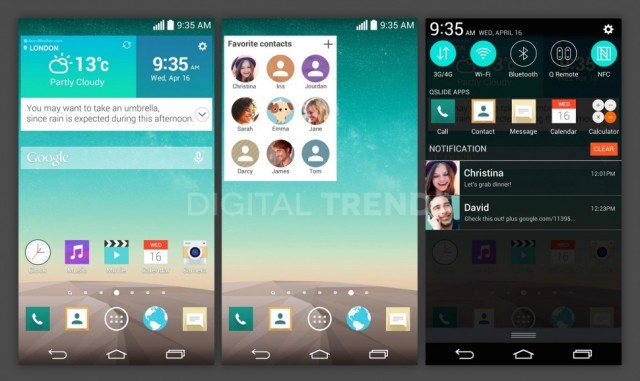 When it comes to custom Android “skins” you either love ’em or hate ’em. But sometimes Android OEM’s can do a lot to help you hate them less, even to the point where you grow to love them over time. We’ve always felt strongly that HTC Sense offered the most refined custom user interface and that Samsung — while packed to the brim with customizable features — was more or less an eye sore. Even further behind the pack was LG, who made little effort to update their UI for the new generation of smartphones, recycling it over and over again.

Thankfully for the LG G3, LG has finally gone back to the drawing board, dreaming up something that’s familiar to LG fans, only much more modern. This new “flat UI” is much more minimal in appearance and while colorful, seems to favor the use of more muted colors for a professional look. We’ll need to have a little more time to play around with all the new software features therein but as it stands, LG has just placed itself ahead of Samsung — and right behind HTC — in the race for best looking custom UI. It’s about damn time. 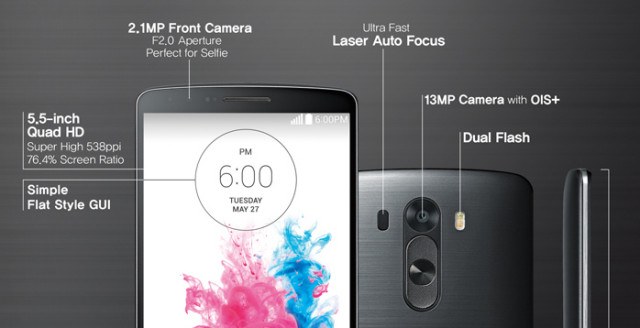 Like most other hardware features, you can’t always judge a camera by the amount of MP it has. When it comes to mobile photography, there’s so many other smaller hardware features — like the LG G3’s optical image stabilization — it’s tough to declare a winner. As we mentioned, the LG G3 introduces LG’s new OIS+ camera hardware, said to bring a 20% increase in stabilization vs last year’s G2 (which only had regular OIS). This means whether you’re recording video or taking a snap shot, the G3’s camera will be more stable, resulting in clear shots for the most part.

Adding to the camera’s performance is the use of LG’s laser auto focus sensor which helps the phone focus quicker than the blink of an eye (.276 seconds). It’s interesting because we’ve seen both HTC and Samsung attempt to tackle this problem using their own hardware methods — the One M8 with its Duo Focus system, and Galaxy S5 with phase detection.

While every single one of these phones are quick to focus in optimal lighting situations, the LG G3’s laser focus is said to be lightning quick even in low light. Keep in mind we’ll need to see some comparison shots before declaring a real winner, but pound for pound, it seems the LG G3 is the smartphone camera to beat. 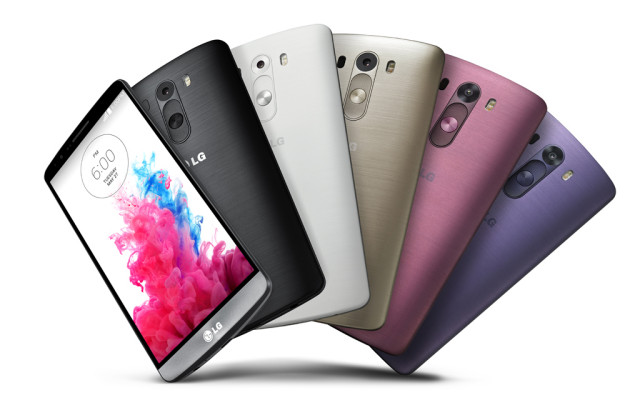 Now, we know many of you haven’t gotten a chance to play with all these phones and we’re reserving final judgement until we receive an LG G3 for review. But you’ve seen spec match up and if you frequent the site, we’re sure you’ve seen our reviews (HTC One M8 review here, Samsung Galaxy S5 review here). After considering all of this, which smartphone do you think wins the crown of most impressive Android device? The LG G3, HTC One M8, or Samsung Galaxy S5? Vote in our poll below.