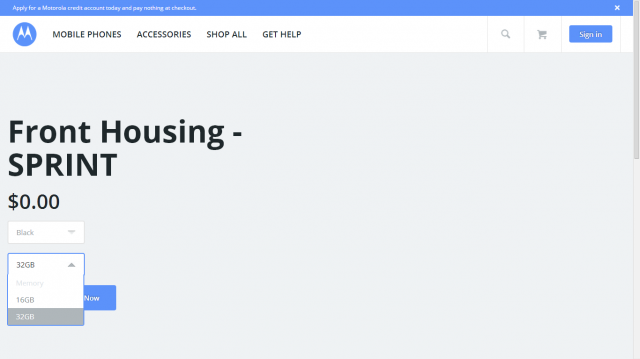 After making a small, semi official, appearance last week on Motorola’s site, the Motorola Moto X+1 is popping up on our radar yet again. Reddit member Octopenis did a little digging into the XML on Motorola.com and what he found was a few additional clues about the the Moto X+1, including color and possible storage configurations.

According to the code, which shows the Moto+1 as the “FLEXR2” (last year’s Moto X was the FLEXR1), we have Verizon, AT&T, and Sprint variants of the Moto X+1, with no mention of T-Mobile. It’s not much, but the fact that there are specific URLs for each of the carrier “front plates” is leading some to suspect the Moto X+1 could be branded with carrier logos on the front. Of course, it’s nothing solid.

When digging around on the Moto X+1 page for the Sprint variant, the phone is only listed as coming in either 16GB or 32GB storage configurations, along with the color options black or white. Once again, it’s nothing too official, but this could be a clue that Motomaker will once again be a carrier exclusive for the Moto X+1 at launch.

There was also mention of leather color options: grey, black, blue, and red. This lines up perfectly with what we heard from @evleaks towards the middle of last month.

As one of the year’s most anticipated Android flagships (we know we’re excited), we’ll continue scouring the net in search of anything else we can dig up on the Motorola Moto X+1. In the meantime, how are you guys feeling about the possible 16/32GB storage options?