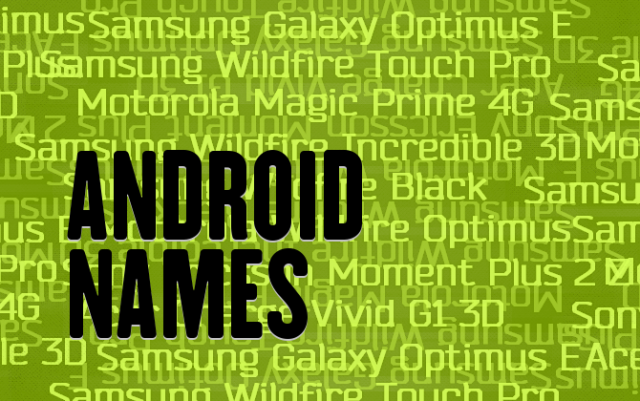 There was a time when Android phones were coming out so often that companies were using anything and everything for names. Rocks, stones, metals, liquids, animals, weather conditions, an even emoticons were used as inspiration. Most companies have come to their senses on naming standards, like Samsung with their letter and number scheme. Let’s take a look back at the wild west of Android device names. Here are the 12 weirdest/worst.

When someone in the tech community jokingly creates a name for your next product, and then it actually gets used, you know it’s a bad name. That’s exactly what happened when Chris Ziegler mockingly said that Samsung would use the name “Mega,” and they actually did. What’s next? The Samsung Galaxy Ginormous?

Anything that could slightly be confused with a feminine hygiene product is automatically a bad name. To make things worse Asus changed the “ph” in “phone” to the letter F. Replacing letters with phonetic equivalents is never a good thing. Just look at all those “cool” products that replace the “s” with a “z.”

This is the story of a company who ran out of adjectives so they started using verbs. Rejected ideas include “ZTE Run, Shoot, Skip, Pass, and Jump.” Or maybe we’re not taking this literal enough. Maybe the phone was literally named after a roller skate. Either way, this is a real fail.

The YotaPhone is one of our favorite devices, but we have to admit the name is a little weird. The first time you hear it you are guaranteed to think it’s the “Yoda” phone. The first time I heard about this phone I didn’t even think it was real. I just thought it was a joke. “Who would name a phone after Yoda?” If people think your phone is a joke it might not have the best name.

The device may be great when it finally launches, but this name is just plain weird. First of all, the company name sounds like a feature on Google+, but then to name your first ever phone “One” is either really dumb or really cocky. HTC already has a thing with “One,” but even if you ignore that the “OnePlus One” name just sounds silly. Someone just really likes addition.

The HTC First was not the first “Facebook phone.” HTC released the ChaCha (in the US, Salsa everywhere else) with a dedicated Facebook button. What do you think of when you think about Facebook? Latin dance moves of course. Makes sense, right? We like to think someone at HTC just really likes spicy condiments, and “ChaCha” was their way of sneaking it in.

Back in the day the “4G wars” were a lot more intense than they are today. Every company under the sun just had to put “4G” in the name of their device. HTC decided to take it a step further and add “LTE” on top of that. What makes this name even more ridiculous is the uppercase letters. The official branding is “HTC EVO 4G LTE.” Stop yelling at us!

“Wait, are you telling me the display is 210.1 inches!? Does it come with a stand?” Samsung has moved to a numerical naming standard since the silliness of some of their early Android devices, but that hasn’t solved all of their problems. The Galaxy Tab 2 10.1 has an excessive amount of numbers in the name. Is this a tablet or an area code?

I honestly could not believe this was a real name for a real device. Want to make sure people know what feature your phone has? Just include a sentence in the name of the device. “Sony Ericsson Live with Walkman.” “LG Nexus Live with Google Now.” “Samsung Galaxy Live with Cheap Plastic.”

If you’re naming a phone here’s some free advice: don’t choose a name that no one knows how to pronounce. Casio did not take this advice with their series of G’zOne devices. Is it “G Zone?” Is it “Gzzz One?” For a quick laugh go to YouTube and watch people try to pronounce “G’zOne” in unboxing videos. The sad thing is these devices could have had so much better of a name. They are all super tough and durable. Let your imagination go wild.

Another bit of advice for anyone naming a phone: don’t just plainly describe the device. Or, in the case of ZTE, how you want people to describe the device. I can’t wait for their next device, the “ZTE Best Phone Ever.” To make things even worse they have a special variant of this device for Boost Mobile called the “Boost Max.” Generic names for the win!

The grand prize of weirdest and worst Android device name has to go the “Samsung Galaxy S II Epic 4G Touch.” This name is so long that some places even put a comma between the “II” and “Epic.” It’s so long that you have to take a breath halfway through it. To me this phone is the perfect example of corporate branding gone wrong. Samsung wants their branding in the name, and Sprint wants something unique for their network. The result is this obnoxiously long abomination of a name.

Do you agree with our rankings? Which phone do you think has the worst name? Did we leave any out? Let us know in the comment below!