Popular web service IFTTT (If this, then that) announced an upcoming beta program for Android earlier today. Shortly after the beta program was announced, IFTTT deleted their post on Google+. Having an official Android app for IFTTT would allow IFTTT to perform actions based on received text messages, GPS location, photos, and more. 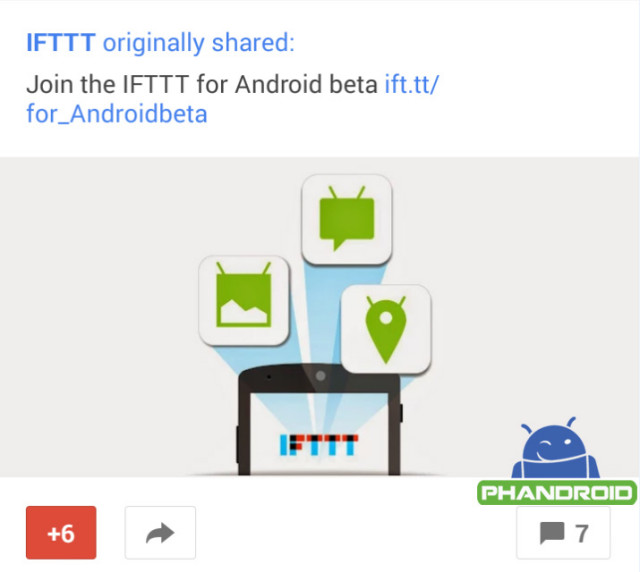 Their original post included a link to a Google Sheets Form for potential beta testers to complete. We’ve reached out to IFTTT to find out why the form was deleted. It’s quite possible they received enough beta inquiries to fit their needs and deleted the post to nix the sign-up process before they were overwhelmed.

The IFTTT for Android beta form included the following questions:

For those not aware, IFTTT is a powerful tool that brings various services around the web together, meshing them into a platform that allows you to automate various daily tasks. The magic behind IFTTT is a simple cause-and-effect relationship where if a particulatar event trigger happens, then a resulting action occurs. Example: If Phandroid posts a article, automatically Tweet the article to your Twitter followers.

I don’t know about you, but I’m a huge fan of IFTTT, using them to automate plenty of social media and news consumption tasks. I signed up for the IFTTT beta and can’t wait to learn more. I’ll keep you posted.

Update: The IFTTT Android beta form has been updated – “The form “IFTTT for Android Beta” is no longer accepting responses.” So, there you have it.

Update 2: We’ve obtained a copy of the IFTTT Android Beta APK. We will not be distributing it as IFTTT wishes to remain in control of the beta program. Besides, the APK won’t do anything until your web account is updated to include the Android channel.