While HTC has been keeping quiet on any kind of information on the upcoming HTC One sequel (One Plus, One 2), we’re know we’re getting close to its release. How, you ask? Well, aside from us quickly approaching the original device’s year anniversary, the amount of “leaks” coming up out of the wood work are usually indicative of a device’s impending launch.

You may remember last week we got a few glimpses of the front and back of an HTC M8, only to have those “leaks” possibly discounted by the subtweet of an HTC exec. According to him, those may have been little more than shop jobs. 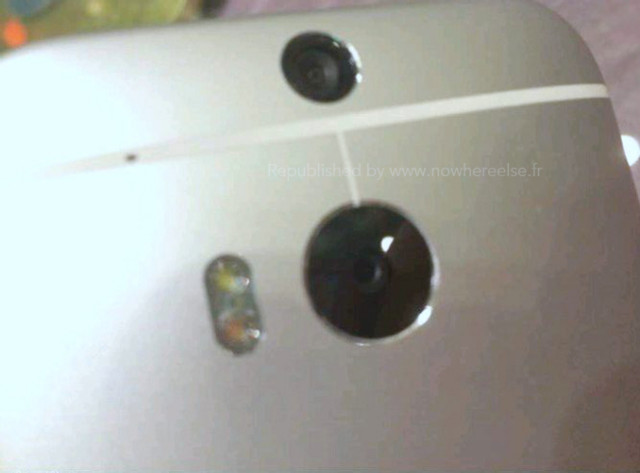 Today, another leak of the back of the device is making the rounds, this time looking more legit than the previous showing. Why? Aside from a nice close-up of the dual-camera array the M8 is rumored to come equipped with (you can see the tiny lens inside), you’ll notice the dual-LED flash is a single unit, unlike the previous leak which showed duplicated single LEDs form the original HTC One (nice try, hoaxer). The dual-LED flash also shows 2 different colored LEDs, suggesting HTC could be looking to duplicated the iPhone 5s’ white/amber flash for improved white balancing when flash is necessary.

Probably the most unnerving part about this leak were the pictured software buttons. Nothing to do with them, mind you (notice how they rotate according to the phone’s orientation), but because the bezel that once was home to the capacitive buttons is still present, now used for little more than the HTC logo.

We don’t know about you guys, but we can’t wait for this device to finally become unveiled and HTC to make this thing official.

local_offer    HTC  HTC One Plus