Is OUYA in trouble? Original founder and VP of product development departs from company

Uh-oh. There might be some trouble in OUYA-land, though it’s entirely possible we’re just reading this story with too much FUD in our eyes. OUYA founding member and vice president of product development Muffi Ghadiali has left the company on his own terms, according to TechCrunch. While there’s no clear indication as to why Ghadiali stepped down at this point in time, you wouldn’t be alone in thinking that he might be looking to abandon what could only be described as a sinking ship.

OUYA gained tons of steam on its way to becoming the first huge Kickstarter sensation. The project generated millions of dollars on the crowd-sourced funding website, and the company ended up gaining much, much more through several rounds of investor funding. OUYA — an Android-based gaming console that prides itself on being open and inexpensive — had suddenly become more than just a few folks trying to sell an Android box. They’d become a legit company, and they’d looked toward a very wide horizon.

There were a few things keeping OUYA back from the start, though. While third-party development seemed full and fruitful, it wasn’t long before folks figured out that the experience didn’t offer much more than what you’d be able to find on today’s smartphones and tablets. OUYA was able to snag a couple of cool timed exclusives, but they weren’t enough to convince many folks to go out and spend $100 on this thing (and, hey, they’d be coming to other devices soon anyway).

You also have to consider that the hardware was outdated before it even launched. As nice as Tegra 3 was at the time OUYA was announced, it was quickly outclassed by NVIDIA’s own Tegra 4 and Qualcomm’s Snapdragon line of chipsets. It only had 1GB of RAM. It simply didn’t seem equipped for long term success. Reports of slow hardware sales and meager profits for developers had tons of people writing the OUYA off.

Couple all of that with the fact that tons of other players are starting to throw their hats into the Android gaming console ring, and you can see why OUYA might not be as magical as it once seemed. 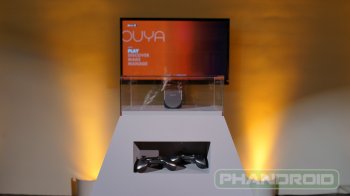 But the OUYA isn’t dead if you’re to believe the following official statement from the company regarding the departure of Ghadiali:

OUYA is focusing more on the next phase of the business and product development. We’ve made some recent changes including the departure of Muffi Ghadiali who was invaluable during the launch of OUYA. As is to be expected, OUYA is an ever-changing business, and as we continue to grow our needs shift accordingly.

We’re especially intrigued by that first part about “next phase” of business and product development. We can’t be sure if this means they’re working on some sort of follow-up product, if they’re striking more deals between developers for exclusive content (they had over 10,000 developers on board before the thing was even released), or anything in between. That said, it sounds like OUYA won’t be going out without a fight, so we’ll definitely keep an eye out for whatever they might be doing from this point forward.