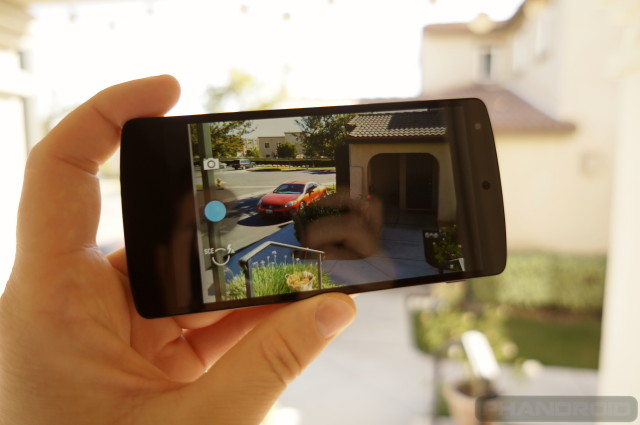 It’s a curse that’s long plagued Nexus devices: piss poor camera performance. While the blame has never rested solely on Google’s shoulders — OEMs are the ones skimping on camera hardware after all — the stock Android camera software didn’t do much to help matters.

With the Nexus 5 now available on Google Play, the most common question we’ve been asked from apprehensive buyers is if the 8MP OIS camera is really as bad as they’ve heard, or if Google/LG have finally turned things around. Without having to wait for our full review, we though we’d tackle the camera ahead of time. Here’s our Nexus 5 camera review. 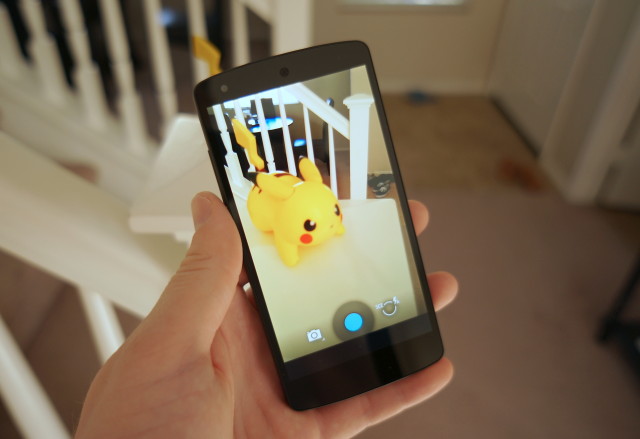 Other than YouTube, the Camera app is still one of the slowest to open on the Nexus 5. Which is weird, given the device screams doing just about anything else. When using the camera lockscreen widget/shortcut, there’s an even longer delay getting the app to open. There was even a few instances where it just hung, leaving me with no option but to force close the app altogether and start over. Not good if you’re trying to capture one of life’s fleeting moments.

Once the app is opened, the camera software is pretty much the bare-bones app we’ve seen in Android 4.3. Unfortunately, that means the obnoxious sliding options are also present. I don’t know who thought this was ever a good idea and was hoping Google would do away with this in KitKat. Unfortunately, I was wrong. 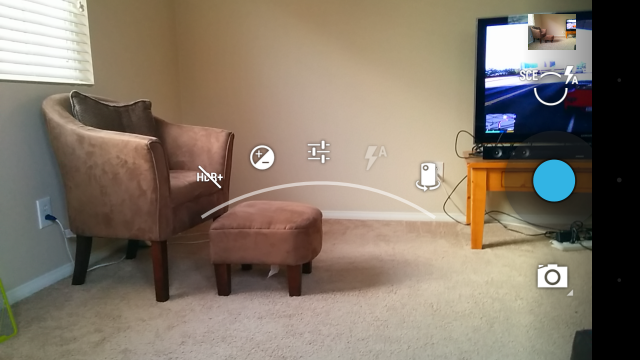 Because Google is thinking about the average user — the one that doesn’t know a thing about ISOs and shoots quick selfies in the bathroom — there are only a few options in the first menu level: HDR+, exposure, “more options”, flash, and front/rear camera toggle.

Sliding your finger to “more options” will bring up another level with: location, countdown timer, pic size, white balance, and scene mode with another level to select either action, night, sunset, party, or none. Again, pretty basic but protip: switch to “party mode” if you want your images to look more saturated and lively.

In well lit conditions, the camera does an okay job of focusing and snapping off shots fairly quickly. There’s a slight delay, but it’s one we’ve seen even on Google Play edition devices. Just don’t go expecting instant capture like on the HTC One.

In adequate to low lighting, sometimes locking the focus is all but impossible. What makes it even more frustrating is it works fine other times. Really, the camera basically does what it wants.

While lack of any kind of burst shot function means capturing extreme action shots are out of the question, thankfully Photo Sphere and panorama were included (Photo Sphere in particular has been dramatically improved) which add a few more features to what would be a completely lackluster camera app.

Picture quality wasn’t too shabby, especially given the device’s Nexus roots. Because captured images always felt a bit washed out (saturation and contrast is toned down), we couldn’t help but feel like we were being nudged into using Google’s new robust photo editing software to tweak photos. Occasionally the white balance would completely freak out (see the front facing camera comparison) and just like camera performance, picture quality too was a bit inconsistent. 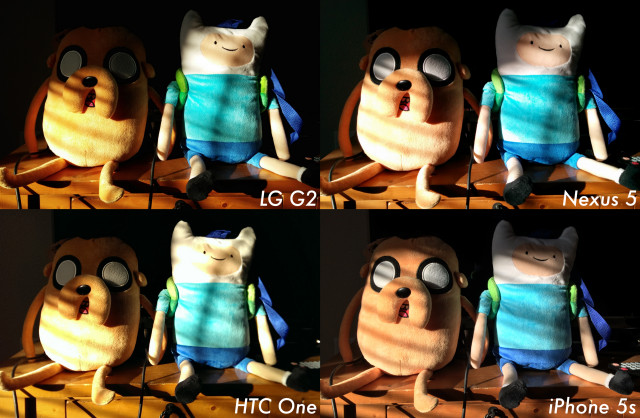 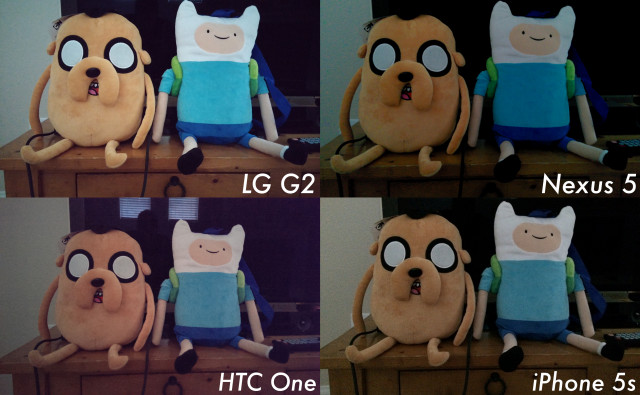 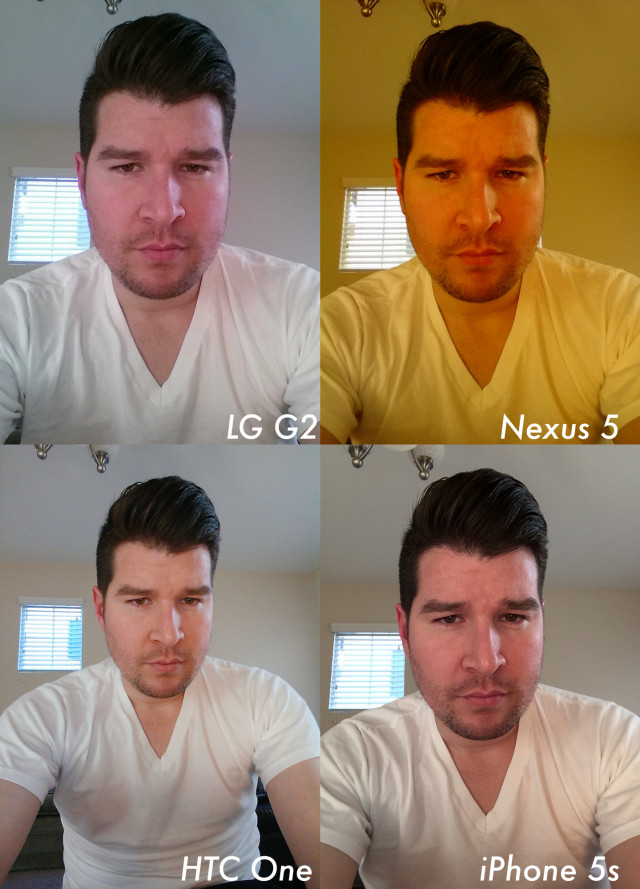 Above you’ll find some quick comparisons of the Nexus 5 going head to head with some of the best smartphone cameras in a variety of lighting situations. We were surprised to see the Nexus 5 holding its own, and while you can set up a perfect shot like we did above (tripod was used), your results will vary according to lighting conditions and just life in general.

HDR+ works well given it actually captures different stops of light and combines them into a single image. Because it’s so extremely slow, the only practical time you’ll want to use it is when photographing food, or completely motionless subjects. Really though, if you have a steady hand use it. Always. Pictures come out dramatically sharper, with increased dynamic range. HDR+ is quite literally the only way I’ll shoot anything with the Nexus 5.

Now here comes the fun part, editing pics on the Nexus 5. Oddly enough, KitKat gives users 2 ways to accomplish this, either by using the Photo Editor found in the standard Gallery app, or the Photos editor in the new Google+ app. Why 2 options? Because Google, that’s why.

Editing images in the Photos app is by far the easiest route to take as it’s essentially the extremely user friendly Snapseed photo editing software. The app gives you 3 main options: rotate, crop, or filters. The first 2 are self explanatory, while the filters options gives you traditional Snapseed filters along with frames.

The Gallery editor is the more robust option, overhauled for Android 4.4. KitKat. Chances are you’ll never see this on any other device than a Nexus, as OEMs tend to remove this app in favor of their own offerings. The Gallery app gives users 4 main options to choose from:

Filers can’t be adjusted like the Snapseed/Google+ editor, but the new KitKat Gallery color correction editing makes up for this with options to adjust everything from exposure, to vignette, graduated, contrast, shadows, highlights, vibrance, saturation, sharpness, local, curves, hue, BW filter, negative, and posterize. It’s a great tool for smartphone photographers that want to dive in and really tweak their photos, and shows us that Google really takes Android’s photo capabilities seriously.

While the camera experience on the Nexus 5 might leave a lot to be desired from those want to simply shoot from the hip, Google’s provided enough tools to make up for what would be a lackluster affair on the Nexus 5. Overall, we’d say the photo experience on the Nexus 5 is a pleasant one, even if it can’t manage to be the best-of-the-best — it’s refreshingly the best Nexus camera to date. Now let’s hope Google can tighten it up further with a software update.

Disclaimer: at the time of writing, we’re running build number KRT16M and camera version 2.0.001. It’s been said that Google will soon push out an update to address laggy camera performance, in which case we’ll update this post if we notice an improvement.