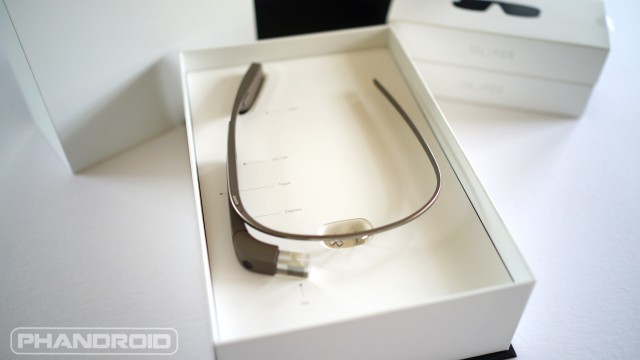 While Google Glass isn’t available for the public just yet, it’s up to the chosen few “Glass Explorers” to beta test the hardware during its formative years.  During this beta period, Google Glass has been receiving monthly updates to the software. Right on schedule, we now have software version XE9 that is being pushed out to the headset. Like previous updates, XE9 introduces a handful of fun new features and tweaks. Let’s take a look at a few of those. 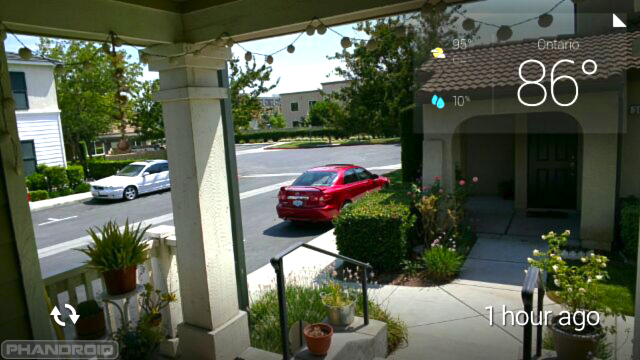 New for XE9 are Vignettes. Think of them as screenshots, vignettes are simply a fun way to share with others what the Glass wearing experience is like. This is done by superimposing a screenshot from Glass on top of a picture taken with the camera. The result is exactly how Glass wearers view the world #throughglass. Simply scroll to wherever you like in the Google Glass timeline — whether it be a news clip, Tweet, or weather — and press the camera button. The resulting picture displays like normal (allowing you to share it via social networks or add a caption), but with a new option to “Make vignette” is now available. Small, but neat feature for sharing on social networks.

We had a hint that YouTube videos would be making their way to Google Glass a few weeks ago, we just didn’t know how they’d be implemented. In XE9, performing a quick Google search will now pull up the occasional YouTube video for your viewing pleasure. While not a standalone YouTube app, this latest feature is best suited for looking up how-to videos on a specific topic like tying a bow-tie or fixing a flat — you know, videos that can be watched while keeping your hands free to perform watch you’re watching.

You can further improve YouTube video results by adding “video on YouTube” at the end of a search query. Although not ideal for swimming through the endless ocean of user created content on YouTube (it’s only the first 10 search results), it’s still a welcomed addition. Thanks to XE8’s new video player controls, watching videos performs just as it should on Glass, with videos that can be fast forwarded or rewound using the touchpad.

We still find it odd that YouTube links sent from Twitter or via email, SMS, etc. aren’t viewable in Glass, putting a damper on the usefulness of the new YouTube feature.

Google’s Shazam-like Sound Search has also (finally) been added to Google Glass. To look up a song simply long press the touchpad on the side of the Glass hardware and swipe forwards. From there, Glass will listen for anything playing in your immediate vicinity, and pull up the result. Unfortunately, tagged songs are confined to your Glass timeline and do not appear to be synced in your Sound Search history. A big oversight, let’s hope that can be addressed in the near future. 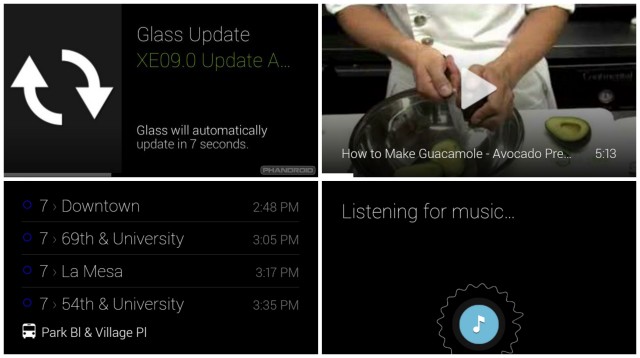 As with every update, a plethora of new Google Now cards have been added in XE9 — but still not all of them — and are pushed to the Glass headset automatically. Glass users can now find cards with transit schedules and directions, reminders performed through Glass (in addition to Keep reminders), as well as nearby attractions and photo spots.

Google Apps support was also added in XE9, as well as improved search that can pull up snippets of trending news stories instead of a tiny search result. Lastly, a recent update to the MyGlass companion app that allows users to control Glass using while screencasting from their Android device is finally working thanks to XE9. Pretty nifty.

All in all, it looks like XE9 was a worthwhile update and although nothing truly ground breaking was introduced, the update is simply one of many that is slowly forming Glass into the mature wearable computing device we know it can be. Great work, Glass team.