As we get closer and closer to Samsung’s September 4th event, more details regarding the Samsung Galaxy Gear — the company’s rumored smart watch — have surfaced. GigaOM has the goods for us this time, with their sources chiming in to give us more details about the watch’s specs and other hardware features.

For starters, the watch is said to have a 2.5-inch 320 x 320 OLED display, one capable of showing a full range of colors. The device will also have a dual-core processor, specifically from the Exynos 4 family. 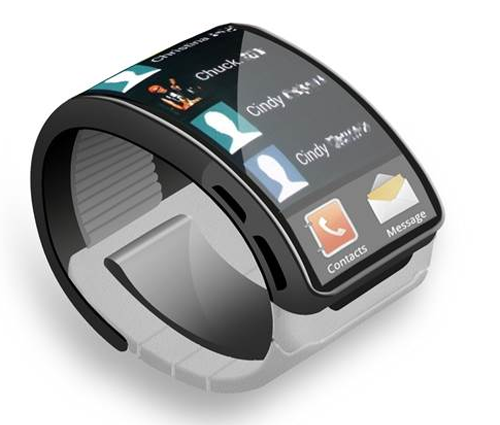 Earlier rumors suggested the processor would be Samsung’s dual-core Exynos 4212 processor clocked at 1.5GHz. Couple that with the Mali-400 GPU inside and this would be the most powerful smart watch we’ve ever seen. We’re not sure how that’s going to fare in terms of battery life, but it’s apparently “pretty decent” for a smart watch.

Furthermore, the Samsung Galaxy Gear is said to have a camera built into the wrist strap, and speakers tiny enough that they can fit into the strap’s clasp. NFC, Bluetooth 4.0 LE and more are all on board to round the experience out.

Of course, Samsung’s wearable will be completely based on Android, with developers said to be getting units with Android 4.1 and, in some cases, Android 4.2. The experience will be tightly integrated with Samsung’s Galaxy smartphones, according to sources.

If you are looking at a notification on your smart watch and decide you want to take your business to the phone, your phone will ,make the transition seamless. For instance, if you’re looking at a truncated email on your watch and decide you want to take it to your phone, you simply unlock your phone and it will know to bring that email up right away. This functionality will be facilitated through the use of Samsung’s companion app, though we’re not sure if this means the Galaxy Gear will be exclusive to owners of Galaxy branded phones.

As for third-party applications, Samsung will apparently bypass the Google Play Store, and will instead push their own Samsung Apps store for downloading watch apps. It’s not the world’s most terrible idea, especially considering the ecosystem for watch apps is bound to be vastly different compared to apps made for phones and tablets. You have to learn to expect this sort of stuff until Google decides the smart watch game is big enough to give it its own category in Google Play.

That’s all we know for now, but with the device said to be unveiled in just over two weeks’ time it won’t be long before we have some official information to sink our teeth into.