I woke up, and Google Reader wasn’t there — how you can still get your feeds for the next 2 weeks

My morning ritual has forever been altered, folks. Typing in that ever-so-useful URL — google.com/reader — no longer takes me to a simple utopia of news consumption. Yea, that’s right, I don’t even use a bookmark — I enjoyed Google Reader so much that typing the URL was a bit of a nerdy joy of mine. Now, that feeling will forever be exiled.

Unfortunately, Google hasn’t wavered on its stance despite the huge amount of outpouring from users the world over. It’s well-documented that we’re big fans of Feedly around here, so that’s what we’ve settled on for the time being.

Give it a shot if you need something to replace Google Reader with. Along with the beautiful web version, there’s a mobile app as well as several great third-party apps (for many different platforms, not just Android) to sink your teeth into. Be sure to check out our post where we listed some of the best Android apps to use with Feedly, and feel free to suggest your own below. 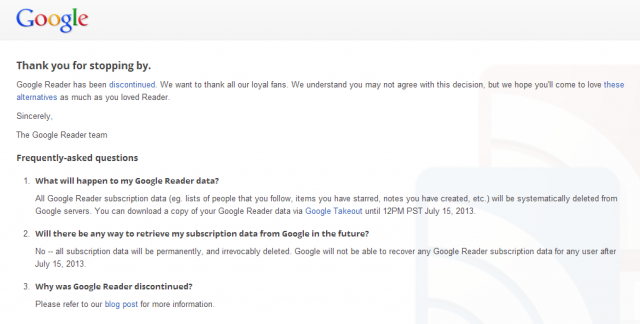 Alternatively, you can try out AOL’s Reader, Digg Reader, and a newcomer to the arena called Kouio. That last one is in beta, and costs $5 per month, but it’s worth a shot if none of the others are doing it for you. Note that not all of these solutions have Android apps or support apps from third-party developers yet, so you should only use them if you don’t anticipate taking your news on the go (AOL Reader does have a nice mobile interface, though).

And that’s a wrap — Google Reader is dead. It’s been a fun ride, and although we don’t agree with Google’s decision to shut it down we ca’t help but to thank them for the wonderful experience it provided. Without Google Reader, developers might not have even imagined the type of web-based RSS services we enjoy today and we’d probably stay stuck in the stone ages. The torch has been carried as far as it needed to be, though, and it’s time to let the front-runner rest.

Oh, by the way — you can still export your feeds to standard RSS XML files using Google Takeout. This service will expire July 15th, so while Google Reader is no longer usable you aren’t immediately locked out of access to your list of subscriptions. Here’s just a quick tutorial to get you started:

And that’s it. The most important file you’ll need from this package is the “subscriptions.xml” file, a standard file structure for importing feed data into an RSS reader that supports it. Unfortunately, not many of the web-based options support said feature right now. You can likely still find these in archaic desktop clients, but we’ll be pinging a few of the web-based folks to see if they plan to add that at some point in the future.

There are also a few other .json files for Reader data, like the items you starred, liked, your followers, people you were following, items shared by you and items shared by your followers, and notes. These files might be worth keeping, as well, and considering they’re most likely no more than a few collective megabytes in size there’s no real reason not to keep them in tact. Who knows? Perhaps someone might come to market with a solution that’ll allow you to upload the entire .zip archive for automatic retrieval of all that stuff. 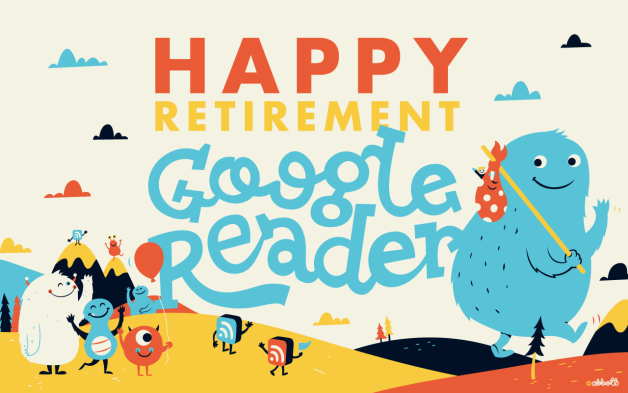 So there you have it. Unfortunately, today’s sunset effectively breaks the auto-import feature most sites were using to make for an easier transition, so if you weren’t able to take care of that before today this is your last hope of getting your feeds from El Goog. Sleep well, Reader, and thanks for the memories! 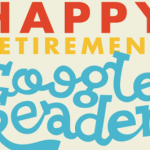 Google Reader is back with Chromium (kinda) 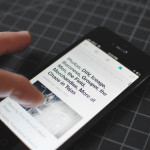 What is your Google Reader replacement? [POLL