If you haven’t already heard the devastating news, long-standing task list app Astrid is dying after being bought out by the entrepreneurial folks at Yahoo. While the app has already been met with stiff competition over the years, Astrid remained an irreplaceable tool for many folks. Its easy-to-use list system and powerful calendar features kept it shining even if other areas of the service were lacking. Now that it’s gone, though, it’s time to let go and find something else.

Thus, I’ve set out to detail the top 5 best task list apps for Android. This is by no means a definitive list, but these are just some of the apps I’ve found that should be able to pick up the torch and keep on moving for any user who has suddenly found themselves scrambling for a replacement. Let’s get started!

It’s a relatively new player in the task list arena, but Google Keep deserves a bit of recognition here. Part of the reason is because it’s from Google, but there’s a lot to like about the service. It primarily serves as a quick and dirty note-taking app, but has some features that facilitate the need to maintain task lists. It doesn’t have a ton of features tailored to that particular need, but its simplicity is perhaps its biggest strength — it is what you want it to be. 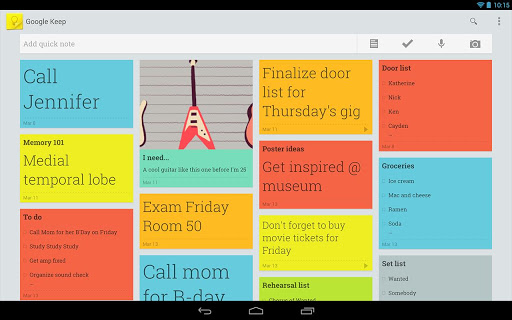 You can create checklists and color-code your task lists if you want. Of course, it all stays synced up with your Google account and it’s all accessible from a desktop browser, so you can access your lists no matter what the situation is. Aside from functionality like adding voice notes and photos, there isn’t a whole lot more to Google Keep. If you value simplicity and don’t want any other distractions it’s a good option to consider. Find it for free in the Google Play Store.

For some, Remember the Milk has become an invaluable task list app. The extremely powerful service features anything a productivity nut could want. It has basic list-making functionality with the ability to set due dates and times, associate a location with a particular task,  organize tasks with labels, setup repeating tasks, set estimates for how long a particular task will take, and more.

For all that Remember the Milk does, though, it’s not until you upgrade to a Pro account that you’ll tap into the true power of the service. For $25 a year, you’ll get unlimited syncing with the desktop browser companion (free account gives you one sync every 24 hours), reminder notifications for tasks that are close to being due or nearby, widgets, Microsoft Outlook syncing and more.

Another reason Remember the Milk gets love from us is the ability to tie it into your Google life. Using Remember the Milk Online is fine for some, but if you want to use the service with Gmail or Google Calendar, you can do just that. It’s also available on a whole slew of other platforms and services, and is flanked with an extensive list of plugins, extensions, and more. Try the Android app out here, and be sure to visit the Remember the Milk’s website to find out more about Pro and all the other great apps and features you can use.

Wunderlist has been making a big  name for itself in task-list apps circles everywhere (if such circles even exist). There’s a reason for that — it’s downright awesome. Like any other task list app worth talking about, Wunderlist has powerful syncing features that will keep all of your data synced up across all of your devices. You can create and manage as many task lists as you want, and can even invite friends and co-workers to collaborate on a list if it’s more than a one man job.

Recurring to-do lists and subtasks, task reminders, push notifications, the ability to create a task by sending a text message, and even a rudimentary note-taking feature for those times where you just want to jot something down. There is a Pro version of Wunderlist, but it’s mainly targeted toward business users. You can delegate tasks by assigning them to specific colleagues, have unlimited subtasks, and as a little added bonus you can choose from 8 backgrounds. That service costs $4.99 per month or $50 per year, but if you don’t need those things you can go quite far with the free version. Find it here in the Google Play Store.

Yes, folks, it’s Raveesh’s favorite task list app. Any.Do continues to make its way onto our site, and it’s because we still think it has a spot among the best the Google Play Store has to offer. Any.Do curates a list of powerful features under one roof, with the obvious to-do list making and syncing being the main reasons to give it some consideration.

Aside from subtasks and the ability to setup recurring tasks, folks can snooze upcoming tasks in case they need a bit more time to get them done, sync with Google Tasks, take notes, collaboration with family, friends and co-workers, and more. Any.Do’s specialty comes in how you do all this. The simplistic and beautiful user interface makes it easy to create and organize tasks, with the ability to drag and drop between lists, swiping-based controls for setting a task as done, widgets, organize tasks by folder and relative date, and more.

The app takes things a step further by allowing you to automatically make a reminder to call someone in the event that you missed a call, and gives you communication options for speaking with those who are involved with a particular list from right within the app. It’s all free and it’s all good, so get over to the Google Play Store to give it a shot.

While GTasks doesn’t always get the recognition it deserves, it’s about time we shined a bigger spotlight on it. It has come a long way since its early days on Android, and it’s worth serious recognition by anyone looking for refuge from the death of Astrid. The app can sync your notes up with multiple Google accounts at a time, and features some very unique and powerful features. 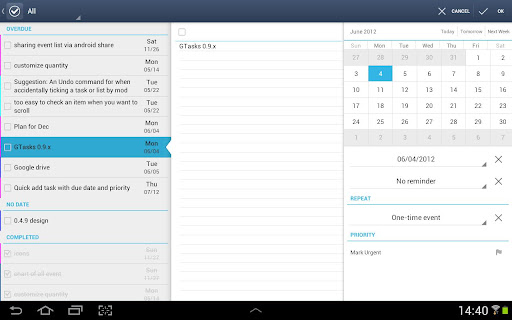 Said features include the ability to add tasks in a batch process (premium), view your tasks on Google Calendar, setup repeat reminder by day, week, month or year, add tasks using the “note to self” command in Google Now, scrolling widgets, and more. It’s pretty much the Google Tasks app we’ve never had, and we’re glad it exists in the absence of something similar by Google. You can get the free version here, or consider everything the premium version unlocks for just $5.

Of course, there are many more in the Google Play Store, and there are bound to be a few of you with favorites that aren’t on this list. Be sure to suggest your own favorite to-do list and task list apps in the comments section below! PS: Some of these great suggestions were pulled from the apps section at AndroidForums.com. Be sure to suggest your own at this thread, and partake in many other app discussions by creating an account today!