After getting Google Glass on Wednesday, Steve and I only had to walk a few blocks to attend the American launch party for the LG Optimus G Pro. We documented the event by using Google Glass to record both the concert and our hands-on tour of the device.

The above video features two perspectives: one taken by myself using the Samsung Galaxy Camera and the other taken by Steve with Google Glass.

The event featured a performance by Atlas Genius. I hadn’t heard of them before, but they were pretty good, and the event was small enough so that we could mosey up to the very front of the stage. Take a look below as we head to the front of the crowd and watch/listen to some jams courtesy of Google Glass.

The LG Optimus G Pro has a huge 5.5-inch display and it’s pretty gorgeous. It goes head to head with the Galaxy Note series and LG isn’t shy about who they think is best- check out one promotional poster found at the event: 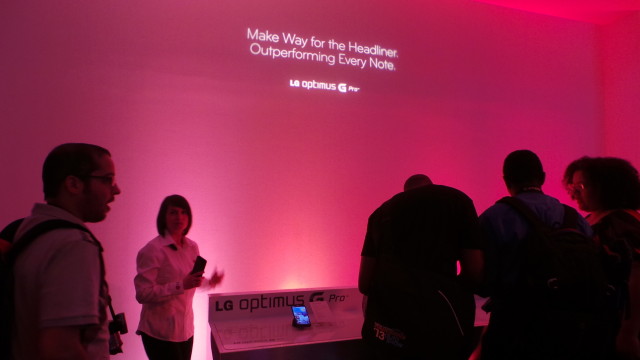 It’s a bold claim, especially considering the success of the entire Galaxy line, and while it seems like a straight forward marketing ploy it’s one that I would have avoided at all costs. In this case, it says more about Samsung and the Galaxy Note than it does about LG and the Optimus G Pro. That’s unfortunate because the Optimus G Pro has some pretty compelling features.

For years now, I’ve complained about the separation between the main camera and front-facing camera on Android phones. You can use one, you can use the other, but you can’t use them together. What if I want to do a quick video podcast where I show myself and talk to the camera but also show the scenery and my surroundings? Couldn’t do it.

With the Optimus G Pro, as featured in the video above, you can accomplish this easily. The camera overlay displays two screens and when you press the second screen on the display, it switches the active camera instantly. If you’re recording a video, it will continuously record the active channel. If you’re video chatting or in a Google+ Hangout, you’ve got both camera angles to play with.

It’s such a simple idea and nicely extends the functionality and convenience of existing hardware. This needs to become a default feature of all phones made by all manufacturers.

Multi-tasking gets kicked up a notch with Q-Slide by LG, and it’s arguably their primary focal point in terms of highlighting the software benefits of the Optimus G Pro. QSlide consists of a set of apps – currently Calculator, Calendar, Notepad, and Videos- that you can access as an overlay sitting on top of whatever else you’re doing. You’re easily able to adjust the size by dragging the right hand corner and change the transparency with a simple sliding scale.

If you’re browsing the web and want to take notes or perform a calculation while referencing what’s on that webpage? Q-Slide could definitely come in handy. Great idea in theory, but it’s the type of feature that I envision sounds good on paper, but becomes used infrequently in reality.

Another interesting software feature of the LG Optimus G Pro is VuTalk, essentially allowing two people to connect and share a scribble pad. Write on one phone and it instantly appears on both. You’re also able to add map overlays from Google Maps, and cute faces and props among other things.

The problem with VuTalk is that it’s only usable when both people have the feature on their phone. The Optimus G Pro is the first and only phone to have VuTalk. So unless your friends and family have the same phone, you’re out of luck. Of course there is a decent chance LG will roll this software out to other devices, but you’re still relegated to using it with other LG phone owners.

The LG Optimus G Pro is an exclusive for AT&T in the United States and is now available for pre-order. It becomes available on May 10th and will cost you $199, but if you pre-order in advance, they also toss in a nice cover that will keep it protected. I’m not typically a cover/case kind of guy, but for a device with such a huge and important screen, I’d consider this a good idea and great deal.

Are you considering getting the Optimus G Pro? How do you think it stacks up against the Note 2? And what’d you think of our Google Glass recordings?