Facebook Home now available — what are your early thoughts? [POLL]

It’s Friday, folks, and Facebook has finally released Facebook Home in the Google Play Store. As its name implies, Facebook Home strives to become your next home-screen replacement, giving you all things Facebook as soon as you press that power button on your phone. It’s quite the interesting experience, one we’ve already gotten to play with at the Facebook Home event. Kevin has also been playing with the HTC First, the first phone to feature Facebook Home by default (which also happens to be available at AT&T today). You can watch our unboxing of that particular phone here, and talk more about it over at the HTC First section at AndroidForums.com.


So what, exactly, is Facebook Home? Picture yourself unlocking your phone to the home screen and the first thing you’re greeted with is a funny picture your friend posted, or a stream of interesting status updates. You can swipe left and right to flip between statuses and stories, and do things like double tap to like them or share and respond. Another major element of Facebook Home is Chat Heads, a unique way to carry on with your conversations while you do other things on your smartphone.

For instance, if you and a friend are coordinating where to meetup for lunch you can launch Maps while that friend’s icon stays hovered over the maps app. You can bring up a chat overlay that will allow you to seamlessly continue your conversation. Once you’re done you can swipe your friend away until you need them — sounds cruel, I know. It’s actually pretty cool, though.

The app seems functionally stable and was delivered as promised, but it hasn’t been met with great reviews in the Google Play Store. In fact, it’s getting a metric ton of 1-star reviews. Why? Well, most users exclaim that Facebook Home sucks the soul out of the Android experience, shunning widgets and customization to make room for status updates and likes. I’m of the opinion that an app should be rated based on how well it does what it was promised to do, but we’re wondering what your thoughts are. 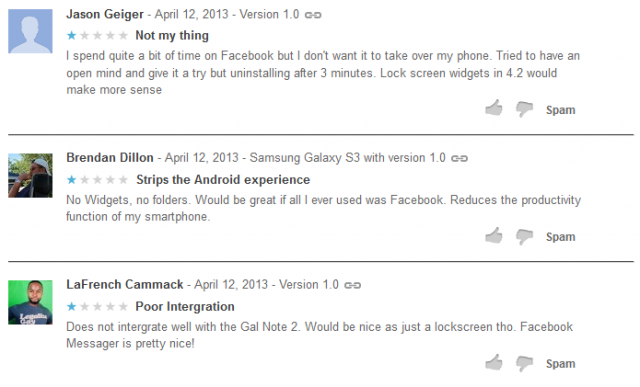 Do you like Facebook Home? If not, why? And do you think bombarding its listing in the Google Play Store with one-star reviews because you don’t like its function is justified or are users forgetting what reviews are supposed to be about? Vote in the poll below and pair that with a comment in the comments section, and if you haven’t already be sure to give Facebook Home a try in the Google Play Store. You’ll need to own one of the following phones (US only for now) if you want to get in on the fun, though this list is bound to expand in the future:

PS: In a predictable series of events, the main Facebook application and the separate Facebook Messenger application have been updated, as well. They simply add the code necessary to make Facebook Home tick as needed, and you’ll also find the usual round of bug fixes and performance improvements we tend to get with every update. Find those at their respective links in the Google Play Store.