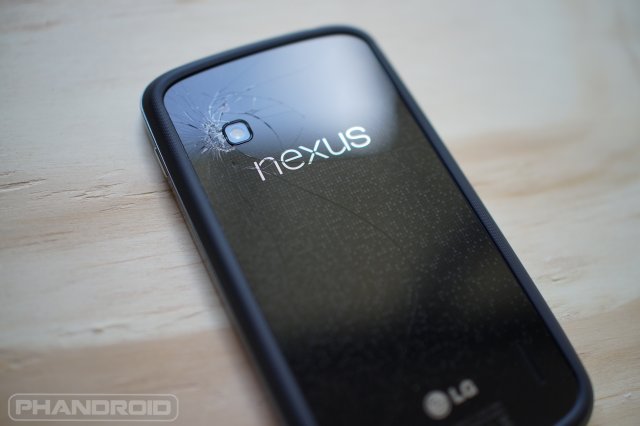 We’ve all heard or seen the Nexus 4 horror stories. An Android device so fragile, even quick changes in temperature could cause the glass on the back of the device to crack. It appears that Google too was listening, addressing some of these issues in a small hardware revision that added little feet to the Nexus 4 (or as Kevin puts it, nipples) in order to keep the glass from laying completely flush on flat surfaces. Yeah, that’s going to help. I remember when Apple first introduced the world to a phone with glass covering both the front and back. Me and my Android-loving friends used to scoff, laughing as our less wise friends’ iPhones fell victim to hard pavement. I guess karma’s a b*tch cuz all that came back to bite me in the ass. Hard.

What you see before you is my shiny, new, once immaculate Nexus 4. Since day 1 I’ve been babying this thing, buying a little bumper for it, ordering screen protectors for both the front and back of the device. I knew what I was getting into. The Nexus 4 is fragile. Nearly every single one of my friends that owns the device has the back cracked. To say that it’s made me paranoid is an understatement. Never once have I ever cracked the screen on any smartphone I’ve ever owned, but now I had to worry about the back. I would wake up in the middle of the night dripping with sweat, quickly grabbing my Nexus 4 to make sure the temperature of the room didn’t suddenly drop, and that the back glass was still pristine. 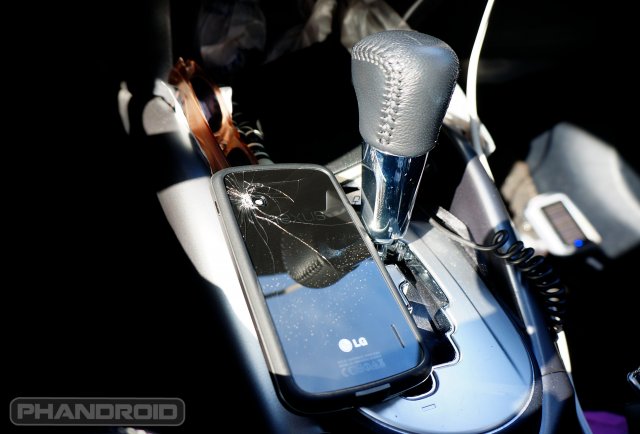 The crime scene, where the victim lay fallen

Yesterday night the unthinkable happened. While driving my car to make a sketchy Craigslist purchase I went to shift my car with Nexus 4 still in hand. It fell about 2-inches into the center console area. The resulting “bang” from the drop was loud enough that I immediately feared the worst. I turned to my friend without even looking at my phone and said, “I think I just cracked my phone.” It was like I had a flashback sequence. All these weeks of babying the phone, windexing it, never once setting it onto anything that could scratch either the front or back (easier said than done), came screeching to a halt. Terrified, I picked up the phone from my center console and after taking a look, let out a groan from the depths of my soul. Crack-free since ’93… no more. For those that are wondering, yes the bumper was on the device and didn’t do diddly squat to help matters in the slightest.

I’ve said all that to say this: under no circumstances should a smartphone manufacturer ever release a device that can shatter from a 2-inch drop. I’ve eaten hard boiled eggs that were harder to crack. This isn’t just poor design, this is an actual hardware flaw. Sure LG touted the Nexus 4 as coming equipped with Gorilla Glass on the front and back, but after what I’ve seen, it might as well be pure egg shell. That being said, I will never — ever, again in my lifetime recommend anyone ever purchase a Nexus 4. Because of the law of physics and the transfer of inertia or something, I don’t even think anything less than a 1-inch thick smartphone case will protect the back from cracking on impact. It’s ridiculous.

So, while I patiently await my HTC One to arrive — which, I hear is constructed out of pure adamantium (or maybe it was aluminum?) — I can’t tell you how excited I am to finally have a device with a build quality so strong, it can suffer maybe a 3-inch drop without shattering. 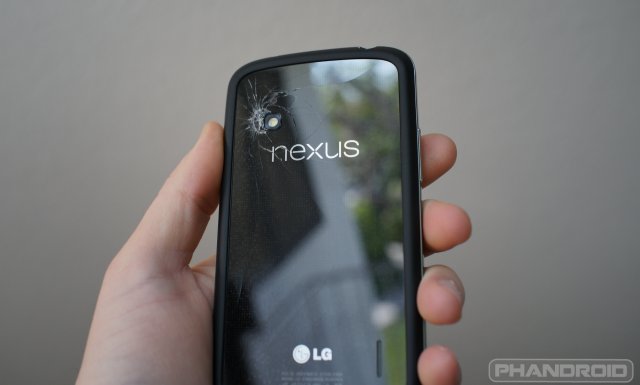 Now, I mentioned before how nearly all of my personal friends with Nexus 4’s have cracked the back glass on their devices (rarely ever the front), and I’m wondering how many of you with Nexus 4’s have suffered the same fate. I’m not judging. Bad things happen to good people all the time. I would just like to see if me and my buds are alone in this, or if cracked Nexus 4’s are running rampant around the world. Remember, Nexus 4 owners only. For everyone else, let me know if the fragility of the Nexus 4 is enough to detour you from making a purchase, or if it doesn’t matter (Nexus’ are all about the software anyway, right?). Cheers.