The greatest part about Android is the sheer flexibility developers have with the platform. Sometimes we see a rival OS come out with some pretty interesting ideas and features and as Android users, we don’t have to mope around wondering when Google will introduce something similar to their mobile OS. No. A random developer from the Play Store can create an app with much of the same functionality.

Take the Ubuntu Touch OS which, back when it was introduced, showed off a slick way of jumping to your favorite apps using a sidebar gesture. Have to say, I was a bit envious. Well, I wasn’t green for too long as developer Mohammad Adib has created an app called Sidebar (Lite and Pro) that mimics Ubuntu’s multitasking behavior, granted it doesn’t always work perfectly. Let’s dive into it. 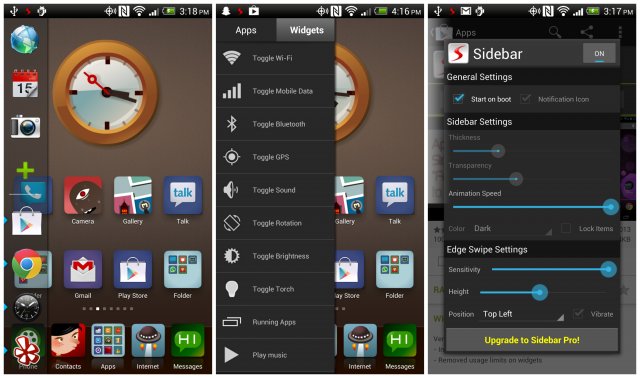 Alright, so Sidebar behaves much of the time exactly how you’d expect it to behave. Pulling from the side of your screen (this can be configured to either the left or right side) pulls up a list of apps and widgets that can be customized with the app shortcut of your choosing. In the latest update, the developer has added the ability to list your recently used applications, making it loads more useful for quickly switching applications (especially since I loath using Sense 4’s multitasking menu). And it’s not just applications. You can even add shortcuts to toggle WiFi, Bluetooth, Torch, even music player functions like play, pause and skip. Configuring Sidebar to your specific tastes is also easy an intuitive (see above screenshot). There’s a variety of toggles to adjust the sensitivity or how big the icons appear in Sidebar. If you have a favorite theme you’re using and want Sidebar to match, you can even change it’s color and opacity. All in all, this sounds pretty epic, right? Well, now let’s talk about what I didn’t like.

Customizing Sidebar with your favorite apps or quick toggle shortcuts is a chore. Adding and deleting is simple enough, but once they’re in your Sidebar, it’s impossible to arrange them without first deleting one and adding another to the bottom of the list. This could be easily fixed (in theory anyway), but enabling some kind of drag and drop interface that I’m praying will come in a future update.

Another issue I had with the app was its speed. You would think tapping the icon of an app recently opened and still waiting in RAM would pull it up instantly — this was not the case. There was often times a 2, even 3 second lag time waiting for a summoned app to open. In that downtime alone I could either use the horrible Sense 4 multitasking system, or jump to my homescreen and select a shortcut from a folder.

Lastly, Sidebar doesn’t play well with other apps. If you have an app that needs to run in the foreground, Sidebar will push it somewhere in the back, knocking it on the floor and giving it a few quick kicks while it’s down. When playing Rdio for instance, I couldn’t get through a single song without the app closing on me. Other times, I’d unlock my phone only to be greeted with a blank or transparent screen where the only thing I could select was my notification bar. Almost as if an invisible app was open, just not behaving properly. It wasn’t until I uninstalled Sidebar that my phone once again started behaving itself, and I regained my sanity. 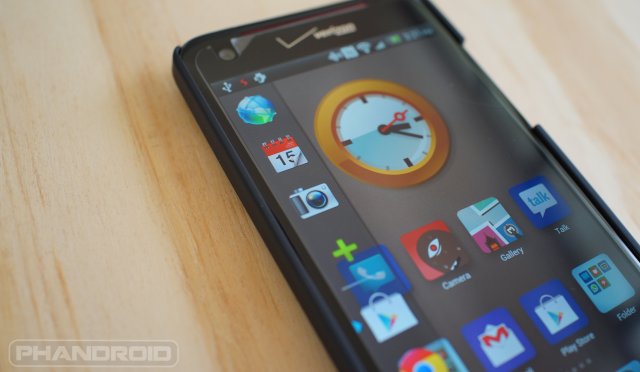 The idea of Sidebar is what I love and I think it has the potential to become great. A few updates from now, after all the bugs have been ironed out and everything is working the way it should, I’ll revisit Sidebar. Until then, there’s no way I can keep this admittedly brilliant idea installed on my phone. If you guys want to give it a try for yourselves, the free “Lite” and paid $2 “Pro” versions can be found below. Maybe you’ll have better luck than I did. Or perhaps you prefer another multitasking application? Let me know if you’re using another app with similar functionality in the comments below. 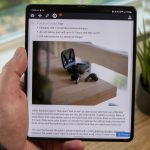 Should You Buy a foldable Phone? 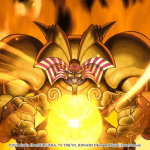