Have you tried to buy the Twitter client Falcon Pro recently? Did you notice an absurdly inflated price tag? That’s not an error or an obnoxious valuation by the developer — that’s to keep you from downloading it. Developer Joaquim Verges was recently forced to price Falcon Pro at around $132 to make sure new users don’t buy the application. It’s imperative to keep the app in the Play Store for those who’ve already paid for it and want to continue using the app, and he doesn’t want to make it free.

Why, exactly, would someone do this? Well, Twitter, that’s why. If you don’t remember, the folks at Twitter introduced new API restrictions that made it so third-party Twitter clients could only get 100,000 “tokens,” which would be unique user activations. The idea was to drive more people to use Twitter on the web or Twitter’s own official apps. The tactic is believed to be in place so Twitter can maximize advertising impressions as it can’t control monetization for third-party apps. 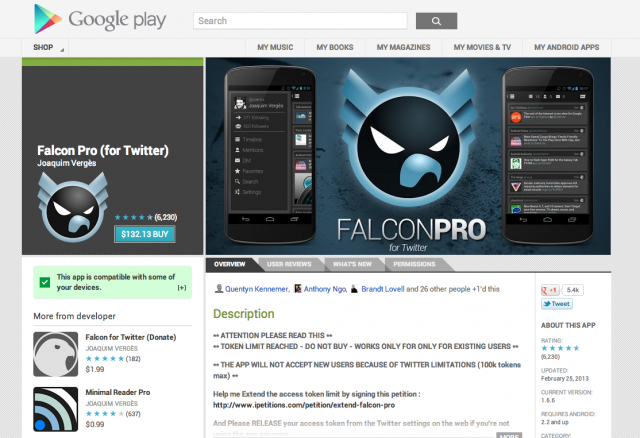 Long story short, Falcon Pro was finally hit by the 100,000 tokens limit, which means new users can’t properly use the app without getting lucky and having someone release a token. It’s quite notable that the app has reached the limit while only having between 10,000 and 50,000 downloads in the Google Play Store (the exact number is somewhere in the 40,000 range). This would indicate an issue with piracy, and some illegitimate users might be taking valuable tokens away from those willing to pay for the app.

That’s a different beast of a story for a different day. The point is that without the ability to authorize more than 100,000 accounts developers are finding it hard to make an honest living off the once-lucrative field of Twitter apps. We wouldn’t be as sour as we are if Twitter’s official app was a joy to use, but the truth is it isn’t. It works, but it doesn’t quite capture the sense of Android design, and it doesn’t have many of the features that are driving users to third-party apps to begin with.

It’s an unfortunate situation that has stifled the growth and spirit of competition, with some developers flat-out refusing to create new Twitter apps from now on. That’s why Verges is supporting this petition, and so am I. The petition specifically requests a limit increase for Falcon Pro, but if we can get enough signatures to capture Twitter’s attention and somehow spur change we’re hoping it helps all developers alleviate what has become a very serious problem.

In the meantime, do your comrades a favor and release the tokens to any Twitter app you aren’t using. It won’t do much in the grand scheme of things, but it’ll at least let a few more lucky souls use the apps they want to use instead of being forced to find alternatives or revert back to Twitter’s own lackluster experience.

I won’t flat-out boycott Twitter — after all, it’s one of our favorite ways to stay in touch with you guys — but I have no problem letting Twitter know that its practices have long overstayed their welcome. Don’t be that guy, Twitter. 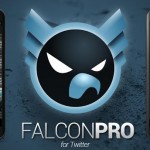 The future of Falcon Pro, and where users can 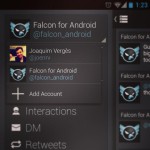 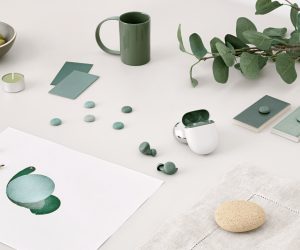