The latest platform distribution numbers for Android have been posted to Google’s developer site, and the results are favorable (yet, at the same time, things seem a bit stagnant). For starters, Gingerbread is nowhere near being dead as it still holds a commanding 45.6% of the pie. There are a ton of Gingerbread devices out there, so they’re either not being upgraded on the software side or people aren’t willing to upgrade on the hardware side yet. 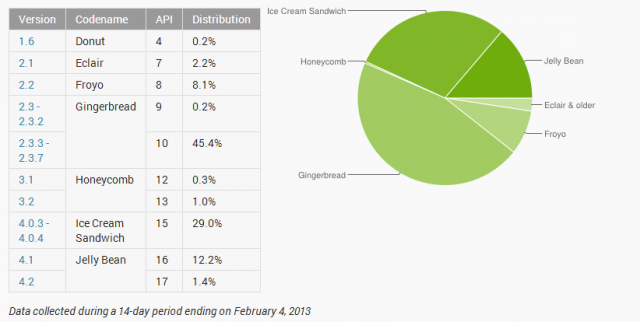 Fragmentation is an issue that Google is still hoping to get under control one day, but it doesn’t seem like the problem is as easy to solve as an algebraic equation. With the likes of Froyo and Eclair still showing decent life, and Gingerbread flat-out refusing to die well past its prime, you have to expect that we’ll never truly get everyone caught up. The most we can hope for is that, at the very least, more and more people get on Ice Cream Sandwich so that more focus can go toward creating great Holo UI apps.

Ice Cream Sandwich never quite reached the same plateaus Gingerbread did, but that’s not necessarily a bad thing. Most people won’t upgrade their smartphones until they have an upgrade ready and the right combination of phone/price is presented to them, and it just so happens that the upgrade period for most people who originally bought Gingerbread phones will come up this year.

Once more people get the opportunity to step up to the latest and greatest hardware at a fraction of the cost we should see them snapping up phones with Jelly Bean in droves, though Key-Lime Pie, or whatever the next version of Android will be called, would likely begin to take center stage.

We enjoy the frequency in which Google upgrades its software, but because Android is open to OEM customization we have to deal with these unfortunate gaps. It’s a vicious and unforgiving cycle, folks, and while the pill may be tough to swallow it’s just something we’ll have to contend with if we want to continue to get upgrades every 6 months compared to the annual cycles most other companies are on.