The HTC M7 has been leaked a few different times in a few different ways, but the most recent leak gives us a look at the device in another light. ETradeSupply has received photos of the device’s chassis, the outer-shell that’ll house parts like the motherboard, camera and display. It’s nothing ground breaking, but it does confirm the HTC 8X-like design we’ve been told to expect. 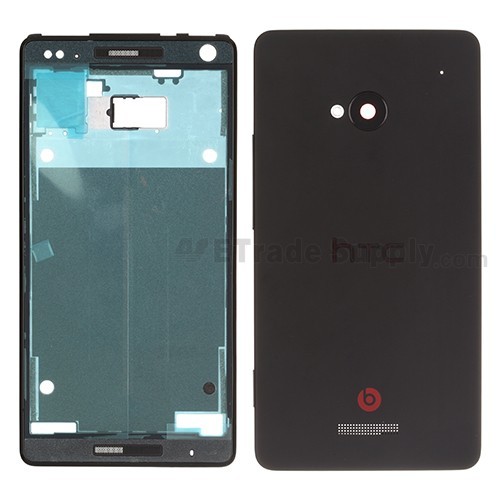 This leak does give us a few more details regarding which finish we can expect to see. According to ETradesupply, the back plate features a flat matte-like finish while the sides are smoother and glossed over. The buttons seem to be plastic, as well. The power button appears to be a tad translucent, something we imagine could be useful for an LED notification light to shine through, but we won’t know why that design decision was made until we have the device in hand.

The rubber gasket inside the DROID DNA seems to be missing from the M7, which means it might be less friendly with water. Most folks aren’t planning to have their cellphones submerged in a pool of liquid, though, so unless you’re absolutely crazy this shouldn’t be an issue with you. ETradeSupply suspects the chassis can house a display that’s around 4.7 inches, but without a fully constructed phone in hand it is a bit hard to tell. Still, it’s not hard to guess that HTC will be looking to introduce a phone that’s at least 4.7 inches.

That display is said to have a 1920×1080 resolution, though, which would make for an astounding pixel density of 469 ppi. Other rumored specs include a 1.7GHz quad-core Snapragon S4 Pro, 2GB of RAM, 32GB of internal storage, a 13 megapixel camera and more. Recent rumors say HTC might be looking to unveil this beast a week ahead of Mobile World Congress with its own event in London, but those rumors are a bit unsubstantiated right now. Either way, we don’t expect February to pass us by without a proper unveiling. Have a look at the image above.