“You sank my battleship!” It was this line from Jim Carey (as The Riddler) in Batman Forever that made me fall in love with Battleship as a child. While the actual game wasn’t nearly as cool as the film made it out to seem, it still remains one of those age-old war games that can be played any time, anywhere and with anything. From video games and the plastic board game set, right down to an old sheet of paper, much like Paper Football it’s survived throughout the years because of its simplicity and adaptability.

Welp, one developer is looking to bring back that old feel of playing battleship with nothing but pen and paper in the form of a game for smartphones and tablets. Enterra Inc has announced its Sea Battle: Confrontation will be launching exclusively for Samsung devices in the Samsung Apps store. 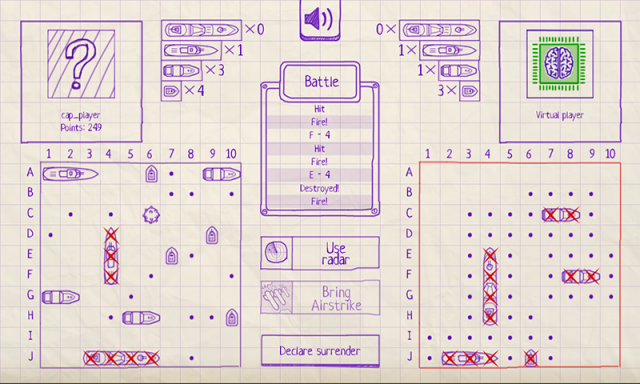 The game’s stylish, classy “paper and pen” look is a perfect marriage for Samsung devices with the S Pen, such as the Samsung Galaxy Note 2 and Note 10.1. They’re quite fine to play with fingers, though, so those without Note devices can have just as much fun. You can play the classic battleship experience here with either AI or a friend via Bluetooth or WiFi, and aside from the steady-paced, monotonous declaration of strategically placed strikes (“A1, F6, G3”) users can use power-ups to call in airstrikes, pull up a radar and even use sea mines.

January 9, 2013, Barnaul – Russian IT company Enterra (enterra-inc.com), a software, mobile applications
and games developer, announces about a release of “Sea Battle: Confrontation” game for Android OS on
Samsung devices (according to an exclusive agreement between the two companies).

“Sea Battle: Confrontation” is a mobile version of classic well-known sea battle on the notebook sheet, but
which includes the opportunity of game play via Wi-Fi/Bluetooth network and management with S Pen or
finger.

One of the strengths of our game version is a simulation of the game battleground in the form of notebook
sheet and the ability to play with opponent via Wi-Fi/Bluetooth channels.

Developers about the game design:

“We didn’t have other variants of visual design as the last time we played the sea battle was in the
university, and then it was just a piece of squared sheet from a notebook and a ballpoint pen”.

Developers about the opportunity of game play via Wi-Fi and Bluetooth:

“We had to work hard that the invitations of opponents to the game and the game itself via network
wouldn’t cause any troubles, would be fast, stable and without a single break”.

search of opponents and the ability to play via Wi-Fi/Bluetooth channels;
game with a virtual opponent in the single-user mode;
game battleground in the form of notebook squared sheet lined for the game;
placement of ships manually on outlined cells or line;
auto-placing of ships;

management of game play with S Pen or finger;
appropriate surroundings and sound;
the Hall of Fame for achievements;
and also additional weapons – radar, airstrike, mine.

“Sea Battle: Confrontation” game is offered for free via Samsung Apps online store (http://
www.samsungapps.com/venus/topApps/topAppsDetail.as?productId=000000529895). The game is
available for Samsung devices based on Android OS 2.3.3 and later.

Enterra is one of the leading Russian software development companies, provides high-end application
development and design and offers highly efficient and thought-out decisions for the needs of the up-to-
date businesses. Enterra representative offices are located in Russia, USA and Europe. Company’s website –
www.enterra-inc.com.