We just got back from LG’s CES 2013 showing, and while much of the OEM’s announcements regarded Smart Home appliances, LG threw a sliver of Android news in there for us to sink our teeth into. The company announced Panorama Note, a feature not unlike Samsung’s S Note that’ll allow you to draw to your heart’s content. 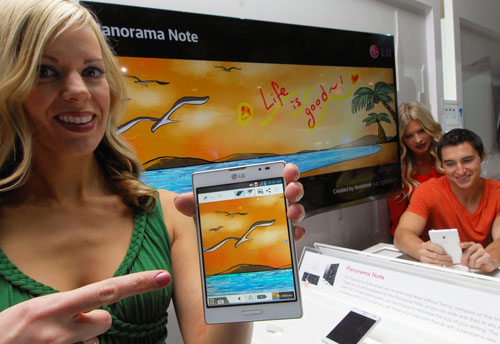 Coming to the LG Optimus Vu: II, Panorama Note’s claim to fame will be that you can create your masterpieces on the odd 3:! aspect ratio display instead of the normal ratio we’re used to. Yep, that’s all it is. LG Mobile CEO Jong-Seok Park says that the company’s phone will continue to come with industry-leading specs, but that its user experience will remain just as big of a focus as LG looks to continue to differentiate itself throughout 2013.

Oddly enough, the South Korean manufacturer opted to save its biggest mobile news for a later date. It will wait until the tech industry converges on Barcelona, Spain this February for Mobile World Congress. We’re sure to see a round of smartphones, and perhaps LG will take another crack at the tablet market. Whatever happens, though, you can bet we’ll be in attendance to get a nice, long look at all the latest LG has to offer. Read on for full press details.

Panorama Note feature was developed from the analog philosophy of scribbling freely on a large canvas and allows users to write, draw or jot notes while navigating the wide 3:1 ratio image. Panorama Note features 5.8 times zooming capability, easy navigation of the screen both vertically and horizontally via cursors and a Mini Map that shows the location of the viewed image in the original image.

“Panorama Note is just one of many user experience features that LG will be introducing this year to differentiate our mobile devices,” said Dr. Jong-seok Park, president and CEO of LG Electronics Mobile Communications Company. “Our UX features will be deeply integrated with our devices to take advantage of the smartphones’ specific hardware. The battle of smartphone specs will continue but we’re going to take the competition to the next level.”

At CES LG will provide an experimental zone where visitors can personally experience LG’s innovative UX such as QSlide, Live Zooming and Dual Screen Dual Play on LG handsets. The new Vu: Talk feature will also make its international debut at CES on Optimus Vu: II. The Panorama Note will be available on specific target devices in 2013.