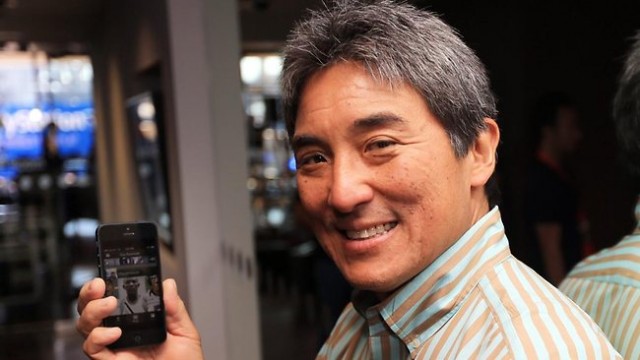 A few weeks back, ReadWrite interviewed Guy Kawasaki — author, publisher, entrepreneur, and most importantly: former Apple evangelist. After years of promoting Apple’s products (you may have seen him in the documentary “Cult of Mac”) turns out Mr. Kawasaki switched over to “team Android,” currently rocking a shiny new Samsung Galaxy Note 2 (before that an S3, and that, a Razr Maxx). Kawasaki’s new motto? “Real men use Android.” In the RW interview Guy went on to say:

“People are kind of amazed, but I don’t use any iOS products, none at all. I fell in love with Android on the smartphone, and then I got a Nexus 7 and started using Android on the tablet as well. To me the great irony is that Apple’s slogan was `Think Different,’ but today if you think different you’re looking at Android.”

Today, in a piece called “This Is How I Work,” Lifehacker was able to get a quick interview with Guy, further pressing him mostly about his work life and products and services he can’t live without. While he still currently uses a MacBook Air to get work done (I, too, am guilty of this), the gadget he says he can’t possibly live without is his Nexus 7. As it turns out, when Apple released the iPad Mini a few months ago, Guy felt Apple’s “me too” tab didn’t offer anything compelling in light of the N7, asking aloud why anyone would want to switch. Great question.

When asked why he made the switch from iOS to Android, he admits that it was originally due to more interesting hardware. The iPhone’s lack of LTE, NFC and multitasking made Android an easy switch for him (despite sticking with Apple’s desktop OS for his computing needs). Now that Apple has finally caught up to Android in some regard with hardware, Guy says it’s simply Android’s superior software that keeps him from moving astray. His favorite Android features?

Talking about his work habits and general life lessons, Guy also says he avoids making to-do lists (he believes it helps prevent the decay of his brain) and deletes any and all email older than 21 days out for pure peace of mind. Funny, clearing out my 999+ Gmail inbox is my New Year’s resolution. But now let me shift the question to you: Despite “fragmentation” and firmware politics, why do you guys stick with Android?