In this day and age you pretty much expect the likes of Samsung, HTC, Motorola and others to attack Apple — and vice versa — but it’s become a bit taboo to see the aforementioned Android-loving OEMs attacking each other. Well, Motorola’s taking the charge against the biggest Android player in the game.

The OEM has gone after Samsung in its latest advertising efforts, though don’t expect a fifth round knockout type of scenario here (sorry, Pacquiao). This episode is a bit more mild than that, but no less interesting. Motorola claims “it’s not easy downloading from another galaxy” on its Facebook page, boldly displaying a Galaxy S3 trying to get through a download of Angry Birds Rio while the Motorola DROID RAZR HD already has it installed. 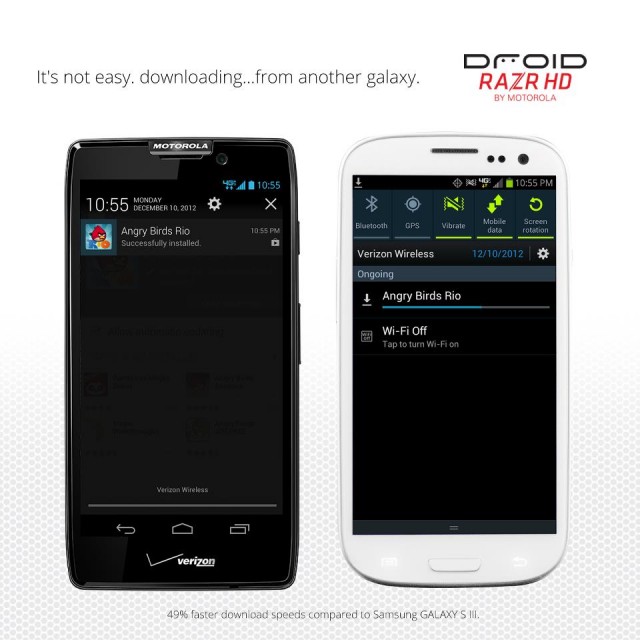 The image used to portray this suggests the Galaxy S3 only gets half signal bars while the Motorola RAZR enjoys full strength signal bars at any given time, but that is terribly misleading, no? For starters, location location location — that plays a bigger part in signal strength and download speeds over 4G LTE even if Motorola’s radios happen to be more solid than the ones Samsung use (though these two use virtually the same circuitry so we’re not sure what to make of that one).

It’s no surprise Motorola didn’t publish how it came about this particular result. The OEM could have tested the Galaxy S3 in a low coverage area, then proceeded to perform the same test on a RAZR MAXX HD in a full coverage area. We wouldn’t know that, of course, because Motorola is not required to tell us, but more power to them if they can get a few more sales out of it. And although Motorola’s image doesn’t show any branding, the simulated software image certainly suggests they’re comparing this to the version of the S3 that’s on the very carrier that has exclusive DROID RAZR MAXX HD rights — Verizon.

Motorola took things a tad further on its website, though the marketing plan there is less tricky than the one they deployed on Facebook. They claimed that the RAZR MAXX HD has 20% more battery life than the Galaxy S3 — this is true as the MAXX HD has a 3,300mAh battery compared to the S3’s 2,100mAh battery. They also boast the MAXX HD’s superior build quality — can’t really get mad at that with all the Kevlar sitting on the back of this thing.

Finally, overall innovation and impressive design are touted over the Galaxy S3, though this is highly subjective and we’d argue that Samsung’s S3 is in the same class as the DROID RAZR MAXX HD in this regard.

We can’t say what compelled Motorola to get a bit more bold in its marketing tactics, but we kind of like it. Even though the speed claims are a bit fishy they do have a couple of points over Samsung’s Galaxy S3. Sure, Samsung has another device that completely outclasses any of the RAZR devices, but the Samsung Galaxy S3 is still Samsung’s primary bread and butter and Motorola has no problem letting you know that it has a device that can stand toe to toe with it. What do you guys think?

[Motorola via Facebook, thanks to everyone who sent this in!]