As Google looks to integrate Google+ with pretty much all of its services we expect to see new features added almost every week. We’re still waiting on the bombshell that should be the death of Google Talk and the subsequent birth of Google+ Messenger integrated in Gmail, but for the time being another Google site has gotten the Plus-heavy treatment.

The Google Play Store is the site I’m talking about, and while there’s been minor cross-functionality before Google has added another level of integration that has us pretty excited. There isn’t much to do right now, but if you notice the reviews section in the screenshot above you can see that the names of each reviewer are replaced by “A Google User.” 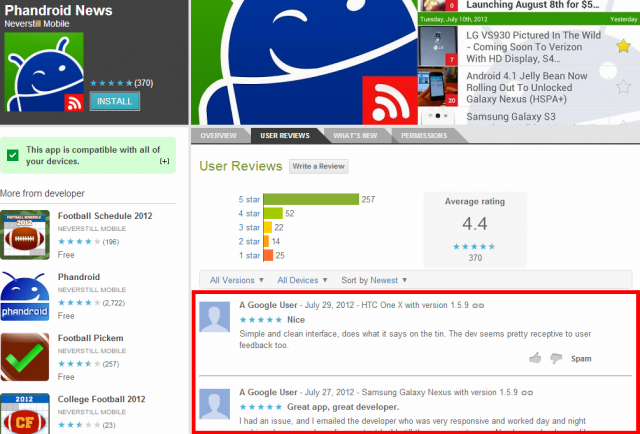 It looks like Google will eventually allow users to link the Play Store to their Google+ accounts and have their profile, name and icons available for those looking through reviews. For now it just displays “A Google User,” and we imagine the names were tossed out so Google could restore some control of privacy to users while they fully implement the rest of this.

We wouldn’t be surprised to see Play Store prompts asking whether or not you’d like to link your Google+ account to your reviews in the future, but for now there doesn’t appear to be anything more to it than making the reviews anonymous.

Most users should be noticing the changes by now as there’s no Play Store APK update for this particular change. It looks like the changes are more on the level of account information so be sure to check it out on the web Play Store or in the Google Play Store on your Android device.

There’s nothing useful to be done with any of it yet, but it’s nice to fantasize about what’s to come. And if you just want to see how your own review would display for the time being why not see how a review of your own would look by downloading the Phandroid News app and submitting a review? You’ll be feeding your curiosity and getting a great tool to help you read Phandroid on the go at the same time — win win, from where I’m standing.