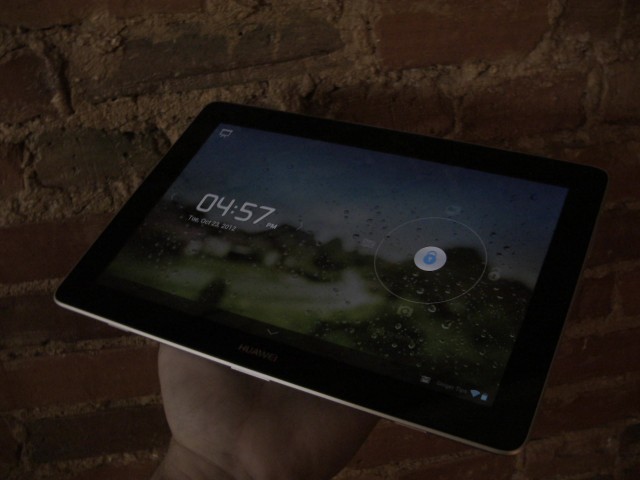 Back in February, Huawei surprised us at Mobile World Congress with the unveiling of their MediaPad 10 FHD. It wasn’t the fact that the Chinese company produced a tablet that had us doing a double-take. Rather, it was its unexpected compliment of top-notch hardware and design, including a quad-core CPU developed in-house by Huawei and a 1080p display. Months later, we have jumped at the chance to finally get a closer look at Huawei’s biggest tablet triumph to date, but does it live up to the hype? Read on to find out.

As we have already mentioned, the Huawei Mediapad 10 FHD features a pretty impressive list of specs. But that’s not the first thing you notice about this tablet. The first thing you notice is it’s slim 8.8mm frame and all around solid design. It’s time we stop thinking about Huawei as a maker of budget-friendly devices, because there is nothing apparently cheap about the construction of the MediaPad 10 FHD. 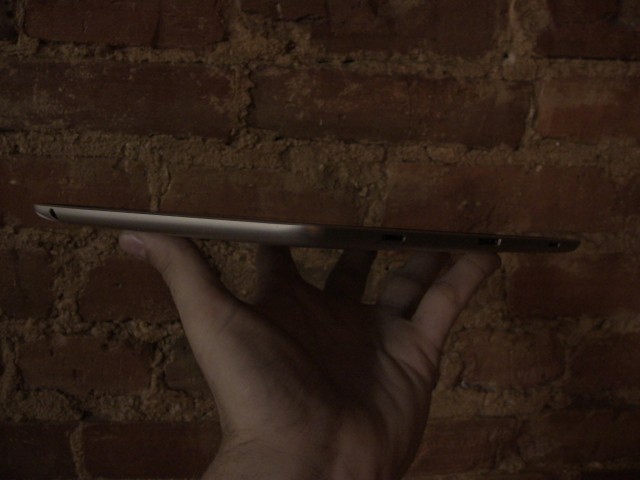 The back of the slate is comprised mostly of a thin metal with a smaller plastic strip housing the 8MP camera and dual-LED flash. The two-tone design of the non-removable back panel is a nice touch. There are stereo speakers here, which serve to reproduce the Dolby 5.1 surround sound technology built into the tablet (Side note: in the above video I had the 8MP camera on the mind when I mistakenly said the device featured an 8mm headphone jack. It’s the standard 3.5mm jack).

But enough about speakers and two-tone back panels, that’s hardly the best that the MediaPad 10 has to offer. Power it up and you are greeted with the tab’s 10.1-inch FHD IPS display rated with a resolution of 1920 x 1200 pixels, or more than enough to reproduce 1080p quality video and graphics. Powering the slate is a Cortex-A9 quad-core CPU clocked at 1.4GHz. The silicon was developed by Huawei and is the same chipset found within their Ascend D Quad smartphone.

Other features include a 1.3MP front-facing camera capable of 720p video capture, an SD card slot, and a non-removable 6600mAh battery. Standard connectivity includes Bluetooth 3.0 and WiFi 802.11 b/g/n, but the tablet is also available with LTE and HSPA+ connectivity.

All things considered, the hardware didn’t disappoint. The MediaPad 10 FHD has what it takes to go toe-to-toe with the big boys, the Galaxy Note 10.1 and Transformer Pad Infinity, on paper, and it certainly holds its own in real life trials.

The MediaPad 10 FHD ships with Ice Cream Sandwich, and what you get is a barebones Android 4.0.4 device. As such, you get everything you expect from the OS (Holo UI, multi-tasking drawer, Face Unlock, etc.). Combined with the powerful hardware of the tablet, you get a smooth and clean Android experience without the bells and whistles. If you like said bells and whistles with your Android device, you might be a bit disappointed. 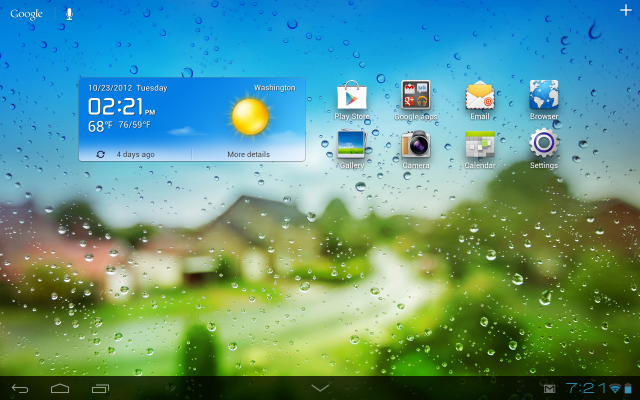 There are some minor customizations throughout, mainly visual in nature with some tweaks to icons and the appearance of folders on the homescreens. Huawei also adds in quick toggles for things like WiFi, Bluetooth, and screen brightness directly in the notifications drawer and brings in a full host of custom options for the camera, which we will go into later.

You still have access to Google’s full suite of apps as well as their selection of resizable, interactive widgets for things like GMail, books, and photos. On top of this, Huawei has included a few apps of their own like Kingsoft Office and Foxit Reader. Oddly, the application drawer has been replaced with a “+” in the upper right-hand corner of the screen. This provides access to widgets but not a master list of applications. Because of this, all downloaded apps must find a place on one of several homescreens (luckily you can add more if need be).

Some might find issue that the tablet is launching with a version of Android that can now be considered outdated, if only because Google launched a newer version of their OS less than a year after the introduction of Ice Cream Sandwich. We haven’t heard from Huawei if the company plans to update the MediaPad 10 FHD to Jelly Bean, but there is a good chance the tablet will receive the new build in the future.

The title of this section mentions several reasons why you might be looking for a tablet, but really they serve as an excuse to talk about the MediaPad 10 FHD’s brilliant display. Surfing the web, playing console-quality games, and viewing HD video and photos is a delight thanks to the high-resolution IPS display featured on the tablet. 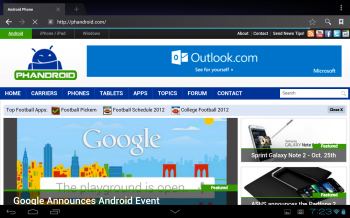 The 10.1 inches of screen real estate make rendering desktop versions of websites a breeze and you would be hard pressed to find a tablet that reproduces high-quality media files better than the this one. How about HD YouTube videos? Those look great, as well. Perhaps that’s why it earned the title MediaPad…hmmm.

Included with the tablet is RipTide, a jetski racing game that was being demoed on the slate back at MWC. The full-3D graphics are handled with ease by Huawei’s latest slate, but we’re sure this thing could be pushed even further. 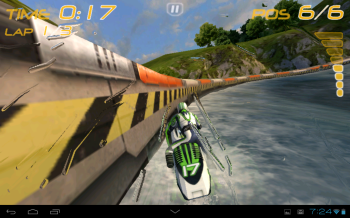 With or without the 1080p display, the MediaPad makes a great device for just about anything you throw at it. But with that display it’s all the better. 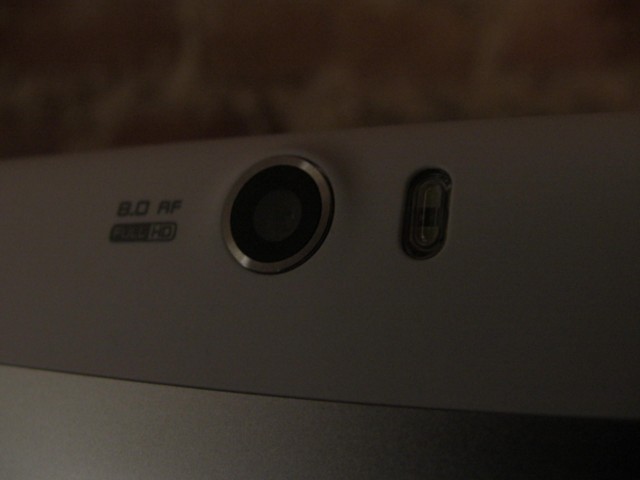 The title of this section names one reason upon which you probably won’t want to base your tablet buying decision, as the MediaPad 10 FHD is not the tablet to convince us it’s ok to be the fool snapping off photos with a 10.1-inch device. Still, its 8MP sensor is capable of full HD video and does a serviceable job capturing photos, though the results were by no means remarkable. 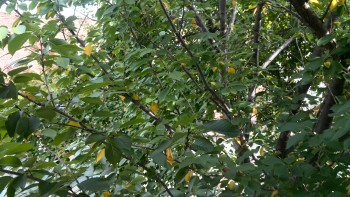 Photos lacked a certain crispness you might expect from the better phone cameras out there, and colors were muted. We’ll give Huawei credit for adding to the camera experience with several filters and effects to give you a little more bang for your buck, but the novelty fades rather quickly. 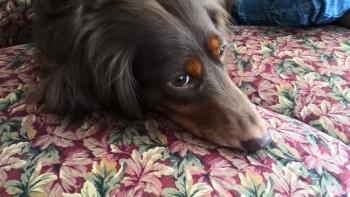 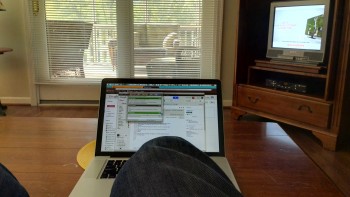 The Huawei MediaPad 10 FHD is a solid tablet that lives up to its name (and spec sheet). Video, games, and web browsing look great on the 1080p display and the quad-core CPU handles all with care. Users looking for the latest and greatest might be disappointed with the tablet’s Ice Cream Sandwich OS, but a lack of Jelly Bean is no reason to snub the MediaPad 10. The tablet makes a great dark horse candidate as an alternative to the Galaxy Note 10.1 and Transformer Pad series.