Samsung Drive Link is a souped up car mode app

In an attempt to make the Samsung Galaxy S3 even more attractive Samsung has decided to introduce Drive Link. It’s an application that’ll give you quick and easy access to your smartphone’s more important features while driving. With big buttons and legible text you won’t be fooling around with your phone while your eyes should be on the road.

From within the app you can initiate GPS, call contracts, check your next appointment, view date, time and weather, play music, and more. The biggest feature is MirrorLink connectivity, a standard wireless protocol for in-car units. 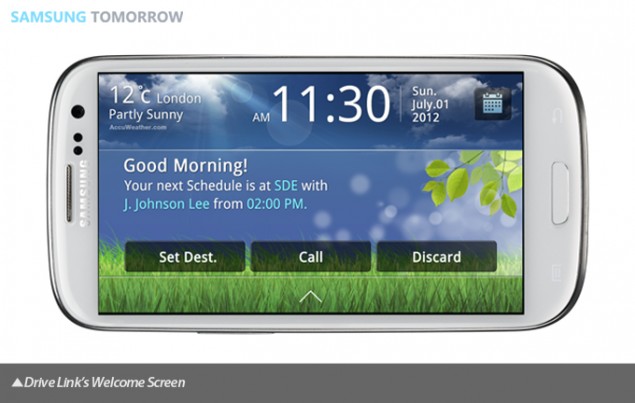 It makes it easy to pair the Galaxy S3 with any compatible unit, including  JVC’s KW-NSX1, Alpine’s ICS-X8, and Sony’s XAV-701BT, XAV-741 and XAV-601BT. More units are on their way, and you’ll even be able to find MirrorLink available in stock car models from GM, Honda, Toyota, Volkswagen, Daimler and Hyundai.

Finally, text-to-speech will automatically read incoming text messages so that you can simply hear the message over your car’s speaker instead of having to read text smaller than what you’d find on an in-dash unit. US and UK English, Spanish, German, French and Italian are all supported now, and there’s no reason to believe more languages won’t be added later.

It’s not a killer app compared to many phones’ existing drive mode apps, but Samsung’s offering does provide that extra power that many users would probably love to have. The question is will you buy a phone just for Drive Link? Probably not, but if you were planning on buying the device anyway it won’t be a bad download. [via Samsung Tomorrow]