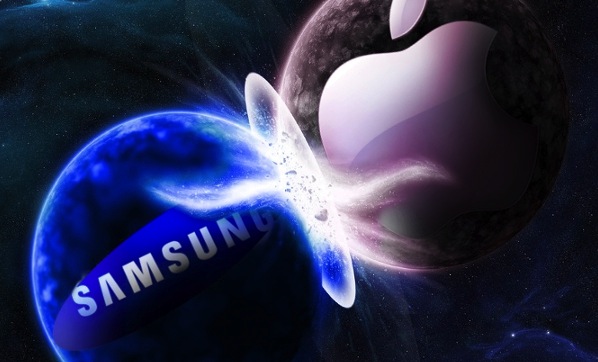 It’s been a long week for both Samsung and Apple in their legal spat over patents, icons and “copying.” With only 2 days left of testimonies, both sides are scrambling to present witnesses in court, and through depositions.

Samsung spent a good portion of today calling upon more “experts” to testify on their behalf, with Dr. Andries van Dam bringing into question Apple’s ‘381 “bounce-back” patent. Andries van Dam argued the patent wasn’t valid due to prior art, demonstrating the UI effect in the both Tablecloth and LaunchTile applications running on an old DiamondTouch Table computer. Just like Apple’s “unique invention,” when scrolling on Tablecloth, the UI displayed the similar effect of overshooting while scrolling, then snapping back to display content properly. Facts: Tablecloth dates back to 2005. Apple’s ‘381 patent was filed 2 years later in Dec. of 2007.

Van Dam went on to testify that the after looking over Apple’s history, he discovered that never once had any of these technologies been made known to the US Patent Office and I think we can all agree, the USPTO doesn’t exactly keep up with tech. Of course Apple split hairs, arguing that the DiamondTouch wasn’t really a “touchscreen device” as covered in their software patent, to which van Dam did a good job of pointing although different from a handheld device, it was a touchscreen device “in every way.”

Later, one of the men responsible for designing Samsung’s Galaxy tablets and smartphones, took the stand. According industrial designer Jin Soo Kim, his work on the Galaxy Tab 10.1 began in October of 2009 (he also referenced an email from Jan 2006 also showing work taking place on the Tab). This predated Apple’s unveiling of the iPad 1 in January 2010, and the iPad 2 in March of ’11. Kim said that the main goal in designing the Galaxy Tab 10.1 was getting the largest screen on the smallest hardware possible.

When it came to Samsung introducing a newer, slimmer Galaxy Tab 10.1 during the same month as the iPad 2 announcement, Kim acknowledged that Samsung had gone back to the drawing board in order to maintain a competitive advantage. Once again, he pointed out the decision to change the design of the original, thicker Galaxy Tab still managed to precede Apple’s March 2011 iPad 2 unveiling. When asked if he had ever copied Apple’s designs in either his phones or tablets, Kim responded, “I have not.”

Under Apple’s cross examination, lawyers began asking Kim if he had any knowledge of the Google email urging that Samsung change the design of their Galaxy lineup to look “less like the iPhone.” Kim denies any knowledge of the email testifying under oath that he never once had conversation with a supervisor (he’s about 4 levels down in Samsung’s designer hierarchy) regarding Google’s feedback. Samsung’s defense later clarified that the Galaxy Tab referenced in the Google email was their older Galaxy Tab design that never actually made it to market.

Before closing up shop for the day, Judge Koh once again pleaded with both sides to reduce the number of filings in the case saying, “Please don’t do this to me.” This was after Samsung warned they could have a stack of objections if Apple didn’t narrow its witness list. “There is just a human limit on what a rag tag [group] can do,” she went on, urging one more time for both sides to talk things over and come to a settlement. The judge warned that if left to the jury, both sides were only increasing their their risk for an unfavorable outcome. Closing arguments are scheduled for Tuesday with both Apple and Samsung getting 2 hours to plead their cases for the last time. Wednesday the jury will finally deliberate and this fiasco will finally be over (but not the last we’ll hear from Apple, I’m sure).