Toshiba is continuing its smartphone line with the addition of a new Regza phone. It’s the Toshiba Regza T-02D and it comes with an insanely, ridiculously high resolution camera for smartphone standards.

It’s a 13.1 megapixel and it uses Sony’s Exmor R backlit sensor. The camera can achieve ISO levels of up to 25,600, something that a lot of DSLRs can’t even achieve (though who would really want that much image grain to make up for a lack of light?) 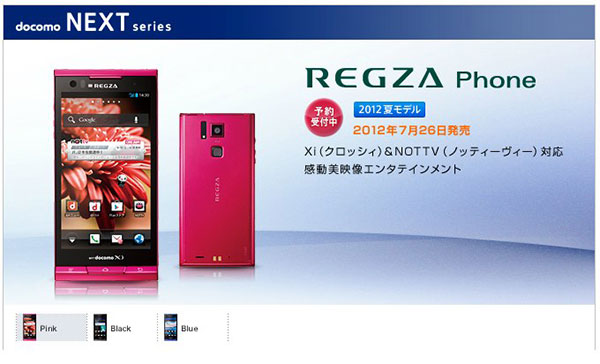 It also has a 4.3 inch “new AMOLED Plus” qHD display, and will house a dual-core processor (make and model unknown) clocked at 1.5GHz. Android 4.0, LTE, and more round out the specs for this thing.

It sounds like it might actually be a very decent smartphone, but don’t expect much of the world to get a chance to own it. This one’s headed to Japan first and we wouldn’t be surprised if it doesn’t venture much further outside of Asia. Read on for full press details.

In addition to supporting ultra-high-speed Xi communications and NOTTV(1) broadcasts for smartphones, the high-spec smartphone boasts a rich lineup of features including a 13.1 megapixel camera and a high-performance dual-core CPU, thereby enabling users to enjoy stunning visuals.

In line with the advent of high-speed communications and multimedia broadcasts for smartphones, video content services have been improving on almost a daily basis, including such enhancements as support for high-resolution video. To make the most of these advances, REGZA Phone T-02D brings together Mobile REGZA Engine 6.0-the REGZA series’ latest high-definition imaging technology-with an OLED “NEW AMOLED Plus” display.

The result is a video entertainment-oriented smartphone that has been developed to allow users to enjoy video with unparalleled image quality. As the new smartphone is powered by ultra-high-speed Xi communications, users will find it convenient to download or stream high-resolution video, and support for NOTTV ensures a wide variety of video content to enjoy.

T-02D works with REGZA Link Share, which can connect the device to a REGZA Blu-ray player to play recorded TV shows, making it possible for users to enjoy their favorite recorded content wherever, whenever. Moreover, in terms of usability this smartphone is in a class of its own thanks to a high-performance 1.5 Ghz dual core CPU and the latest version of the Human Centric Engine, offered by Fujitsu to make for easy operations through technology that adapts to users and usage environments.

Furthermore, the smartphone features a host of standard and convenient features, all packed into a single handset, such as a smart fingerprint sensor, an 1,800mAh large-capacity battery, water- (IPX5/8) and dust-resistant (IPX5)(2) technology, ATOK, infrared communications, and Osaifu-Keitai®. REGZA Phone T-02D is available in three colors: Pink, Black, and Blue.

Mobile REGZA Engine 6.0, the latest in high-definition imaging technology
The handset offers new support for two technologies: Active Noise Reduction technology, which performs noise processing in a manner that best suits the image, and Sharpness Equalizer technology, which produces a clear picture by adjusting the contours of the photo. These technologies ensure that 1seg broadcasts and web video, as well as still photographs(3) and movies captured with the phone are visually even better looking.
REGZA Link Share(4) connects with REGZA devices and REGZA Blu-ray(5)
T-02D also supports REGZA Link Share, which enables REGZA devices to be connected with REGZA Blu-ray players. As a result, users can enjoy both live and recorded high-definition programming from anywhere in their house(6), in addition to being able to make high-quality copies(7) of programs that can be enjoyed while on the go.

2. Support for NOTTV broadcasts for smartphones

The smartphone features an OLED “NEW AMOLED Plus” display that renders video with remarkable clarity in a full spectrum of 16.77 million colors. A wide color gamut that can produce 110% NTSC(10) ensures vivid, lifelike pictures.

In addition, the phone’s super-durable Corning® Gorilla® Glass is tough enough to withstand drops and the rigors of daily life.
4. Ultra-high-speed Xi communications and a 1.5 GHz dual-core CPU

“On” when held
Based on the smartphone’s orientation and motion, the handset automatically determines whether or not it is being held in the user’s hand. As long as it is being held, the screen will be kept lit.
Intellicolor
The phone detects the kind of lighting in use at the user’s location-such as fluorescent, incandescent, and natural lighting-and automatically adjusts the screen’s color balance to the optimal setting.
Shake-activated screen recovery
Even if the user unintentionally tilts the phone, the screen orientation can be returned to its original state by simply shaking the handset two or more times. This is useful for quickly returning the screen orientation to the desired state when the user is lying down.
Sleep log(11)
With its built-in accelerometer and microphone, the smartphone can detect the state of the user’s sleep and provide detailed information about the user’s sleeping habits, including the duration of sleep, the number of times the user rolls over during the night, and snoring-related information. The handset will also offer advice to users about how to improve their sleeping habits.

6. High-resolution 13.1-megapixel camera among the top of its class of smartphones

T-02D’s camera is equipped with an “Exmor R for mobile” back-illuminated CMOS sensor, along with the “Milbeaut Mobile” image processing engine that incorporates a wide range of photography capabilities, including high-sensitivity capturing and noise reduction. The combination of these features allows for stunning high-resolution photographs and videos.

Highly responsive
The camera has a launch time and shot-to-shot wait time of about 0.5 seconds(12). As a result, users never miss out on the perfect moment, and can capture it with a great looking picture.
Super nighttime mode
In addition to T-02D’s ISO 25600-equivalent high sensitivity, the phone also comes equipped with a nighttime mode that allows users to take beautiful photos at night while minimizing camera shake and noise, two problems commonly encountered with previous low-light photography technology.

Rather than using a passcode or swipe pattern to unlock the phone’s screen, the new handset’s fingerprint sensor allows users to simply press and slide a finger across a switch to quickly unlock it. The screen can also be turned on and off using the switch, enabling one-touch operations.
Compatibility with Key Services 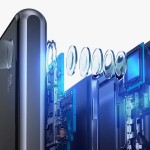 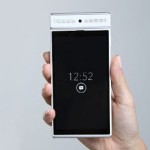 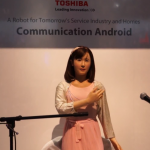 more_vertVivo makes its European debut with the launch

Vivo, a sister company to Oppo, OnePlus, and RealMe, is officially making its way into the European market today with the launch of the Vivo X51. The premium mid-range smartphone will be going head-to-head with other devices running the Qualcomm Snapdragon 765G chipset, but the company is hoping the phone’s unique camera system will help …