Archos has unveiled the first option in their new line of ELEMENT tablets. It’s an ARCHOS 97, and as the name suggests it sports a 9.7 inch display.

That’s not even the most interesting thing, though: you can get yourself a legit 10 inch Ice Cream Sandwich tablet for just $250. 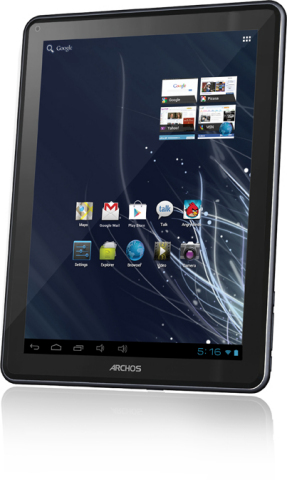 Don’t get too happy just yet, however, as Archos tends to cut corners when it comes to their Android products. Their press release only mentions the device has a 1GHz processor.

Other goods are a front and back camera (no mention of their quality so we’ll assume it isn’t great), and 16GB of storage with expansion options.

We’ll need to await more details to figure out what exactly we’re getting here, but there it is. Read on for full press details.

The ARCHOS 97 carbon, is the first of the new ARCHOS Elements series to be released, offering the latest mobile technology with a new slim and light design

ARCHOS, an award-winning innovator in consumer electronics, is pleased to introduce the ARCHOS 97 carbon, the first of its new tablet range called “ELEMENTS”, an entry-level line up of 7, 8, and 9.7-inch tablets that combine ARCHOS design and engineering with full access to Google PlayTM and a full suite of Google apps at an affordable price.

Equipped with the latest mobile technology and an elegant aluminum finish, the ARCHOS 97 carbon is only 21.8 ounces and 0.45” thick. Its sharp and clear IPS multi-touch screen delivers amazing vivid colors and impressive wide viewing angles. For the smoothest interface experience, ARCHOS has powered this tablet with a fast 1GHz processor, 1GB of RAM while running AndroidTM4.0 “Ice Cream Sandwich.”

“We wanted to introduce a new series that not only combines affordability with a new slim design, but features the best that Google has to offer,” says Henri Crohas, ARCHOS Founder and CEO. “With the ELEMENTS series we have done just that. It’s the perfect balance of hardware, software optimization and content through the Google PlayTM ecosystem.”

For more information about the ARCHOS Elements line, visit www.ARCHOS.com.

ARCHOS, pioneer in the portable audio and video player market, and now specializing in Android tablets, has repeatedly revolutionized the market for consumer electronics since 1988. Today, ARCHOS offers Android Tablets, Tablet PCs and MP3/MP4 players. In 2000, ARCHOS launched the Jukebox 6000, the first MP3 player combined with a hard disk. Then in 2003 ARCHOS introduced the first portable multimedia players with TV recording. In 2006 Wi-Fi is implemented and then touch screens in 2007. In 2008, ARCHOS launched the first generation Internet Tablets, and then the first-ever Android powered tablets in 2009. ARCHOS has offices in the United States, Europe and Asia. ARCHOS is quoted on Compartment B of Eurolist, Euronext Paris, ISIN Code FR0000182479. Website: www.archos.com.