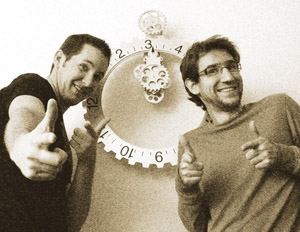 Rob Jagnow (left in photo next to lead artist Brendan Mauro) heads up Lazy 8 Studios, the small development team responsible for Cogs. Cogs is a multi-platform title available on everything from PC to PS3, but only recently came to Android. The game has been nominated for several awards, taking home a grand prize in the Indie Game Challenge, and further benefitted from exposure through the Humble Indie Bundle. Success has allowed Rob and his team to focus on new and exciting challenges, including the upcoming experimental game Extrasolar, but he is quick to remind fledgling developers that the industry isn’t always easy.

As part of Developer Appreciation Month, we sat down with Rob to ask him our “10 Burning Questions” and gain some insight on his experience porting Cogs to Android and his thoughts on Google’s app ecosystem. His answers highlight some of the challenges multi-platform developers face as well as offer some great advice for those looking to make a living developing apps and games.

Phandroid: How did you get started with Android Development?

Rob Jagnow: To be honest, my original intro to Android development was a little rough. Setting up the Android development environment was a huge headache and eventually I ended up hiring someone else to help get Cogs running on Android. It didn’t take long for him to get it working, but we still had the problem of how to get Cogs looking awesome on the huge variety of Android devices out there. I ended up tabling that project for a while until Apportable (apportable.com) offered to help with the port. They have some tools that make it really easy to get iPhone games running on Android devices. Meanwhile, I focused my time on writing new code to automatically modify the UI layout to adapt optimally to a wide array of devices with various screen sizes and aspect ratios. In the end, I’m happy that we managed to get a version of Cogs that plays beautifully on all the devices that we offer it for.

P: What phone do you personally use (or what is your favorite Android device)?

RJ: I love my first-gen Droid. I’m not an early adopter of hardware. I don’t need the latest, greatest, fastest CPU. But what I do love is something that’s just really functional. For me, the slide-out physical keyboard is a huge feature.

P: What was your biggest challenge in developing Cogs for Android?

RJ: The Android ecosystem is just so huge! There are so many different screen sizes, aspect ratios, texture compression formats, graphics capabilities. I never do a lazy port. If I’m going to get Cogs working on a new piece of hardware, I’m going to take the time to make sure it looks great. So we put a lot of love into teaching Cogs to automatically adapt its layout for your Android device.

P: How has exposure from the Humble Bundle affected Cogs on the Android platform? Is it seeing more downloads from Google Play since appearing in the indie game pack?

RJ: Cogs has now been featured in two Humble Bundles — first in a Windows/Mac/Linux bundle and then later in an Android bundle. The exposure we get from that is huge. Since I have a small team, the revenue that we took in just from those bundles has given us enough financial freedom to design a really groundbreaking experimental game called Extrasolar. If you’re curious, you can check out the teaser at exoresearch.com. I promise, it’s like nothing you’ve ever seen.

P: Monetization: in terms of driving revenue, can you tell us about your experience, your strategy, and the overall potential?

RJ: I think you’ll find that most small indie developers are more than happy to share their “secrets.” There’s this dangerous notion that apps are a gold mine — that you can put any crappy app up on the iOS or Android store and within a few weeks, you’ll be diving Scrooge-McDuck-style into piles of money. The harsh reality is that it’s almost never enough to just create the app. You also need to spend time building a community, spreading the word, fixing bugs, and issuing updates. I would encourage developers to announce their apps early, make a great trailer, post screenshots, post to Facebook, maintain a Twitter feed, and generally do everything you can to build a community around your app.

P: What do you want to see in future versions of Android?

RJ: Mostly, I’d love to see Google make it easier for developers to start making games on Android. Better quick-start and debugging tools could really go a long way in opening up the platform to more novice programmers.

P: You develop for other platforms. How does Android compare to those platforms?

RJ: Believe it or not, Cogs is now available on 9 platforms (PC, Mac, Linux, iPhone, iPad, netbook, Android, PS3 Home, and cable set-top boxes). This really boosts the visibility of the game. Until the tools improve, Android is one of the harder platforms to develop for, but it’s also one of the easiest platforms to sell on. It’s super easy to get your game listed on Google Play without having to jump through a zillion hoops.

P: If you could give one tip to fellow Android Developers, what would it be?

RJ: As much as possible, write your app in platform-agnostic code. It will make it that much easier to port your app to other platforms. Also, if you’re thinking about writing your game engine from scratch, first look around to see if there’s some other tool that can do what you need it to do. There’s no sense in reinventing the wheel if you don’t have to.

P: Tell us one thing that most people don’t know about you.

If you haven’t checked out Cogs for Android, there is no better time than now to give the “steampunk puzzler” a go. You can download the game from Google Play now. For more information on Lazy 8 Studios and their upcoming titles, check out their official website.

Don’t miss your chance to win! Sign up for our Developer Newsletter: it’s required to win most of our contests and it’ll feature some huge announcements that you won’t want to miss.

10 Burning Questions with Michael from Cloud. 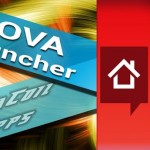 10 Burning Questions with Kevin from TeslaCoi 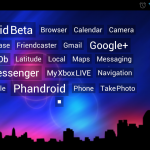 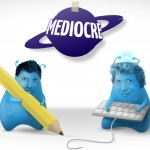 We Interview Mediocre, Developers of “S 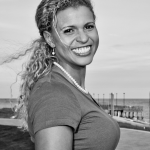