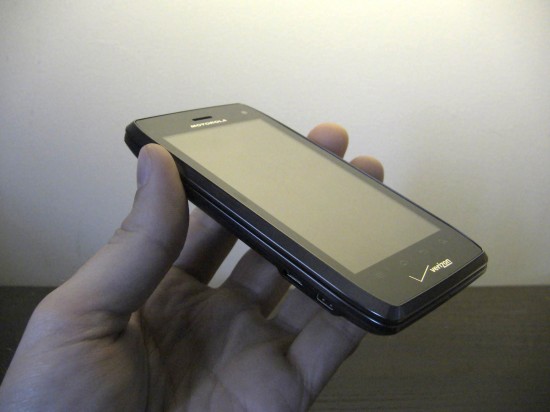 When the Motorola Droid hit the scene, the whole Android landscape changed. Since then the marquee device has fallen from the spotlight, but it’s back in a big way for the fourth installment. The Motorola Droid 4 continues to improve upon the design of the QWERTY-slider handset, upping the specs yet again and adding in a first for the line, 4G LTE. Motorola has again made strides to improve the keyboard and has added in a few new software twists to round out the latest edition of the Droid. Is it the best Droid yet? Read on to find out.

At first glance, the Motorola Droid 4 could be mistaken for a much fatter Droid RAZR (Droid RAZR MAXX MAXX?). Its 12.7mm thickness — same as the Droid 3 — won’t hold a candle to the RAZR’s 7.1mm profile. At a millimeter thinner than the original Droid, the line isn’t doing much to slim down. The silhouette of the Droid 4 features the same angled corners found on the RAZR and XYBOARDs, an element that seems to define Moto’s current Android crop. A 4.0-inch display holds par with the Droid 3, which was the first in the line to move up from the 3.7-inch screen size. It’s qHD (540×960 resolution) in this case. 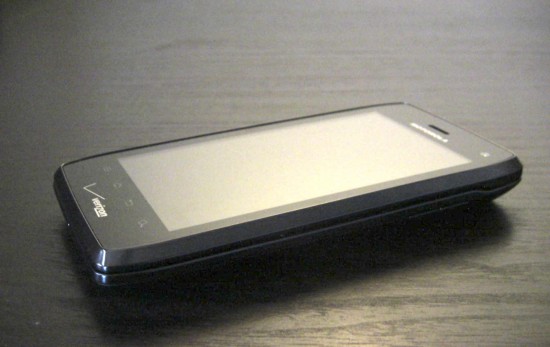 Inside the Droid 4 rests a dual-core TI OMAP 4430 processor clocked at 1.2GHz, 1GB of RAM, and 16GB of internal storage. The phone sports an 8MP camera with LED flash and 1080p video recording and a 1.3MP front-facing camera. Also found are microUSB and microHDMI ports, a volume rocker (but no dedicated camera key), and 3.5mm headset jack. The hardware alone makes this the most powerful member of the QWERTY Droid branch of phones, and it definitely counts. Gaming and web rendering hardly lag and navigating through the phone’s UI is a breeze. 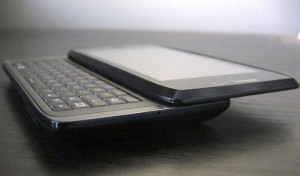 The phone’s 4G LTE connectivity was nice and zippy, just like we have come to expect from Verizon’s network. Call quality was good and connectivity was a non-issue. 3G/4G network switching showed no hiccups.

The Droid 4 does feature removable microSD storage (my review unit came with none pre-installed) up to 32GB, which is accessible by removing the phone’s back cover. A special key, provided in the box, is needed to gain access. The phone also utilizes a microSIM for 4G LTE connectivity, which can be found in the same location. The battery, however, is not removable. This isn’t necessarily a bad thing, but the 1785mAh battery installed is a far cry from the 3300mAh of the Droid RAZR MAXX. The ability to swap in a fresh battery or install an extended one will be missed, especially with extra elements such as keyboard backlighting drawing even more juice. 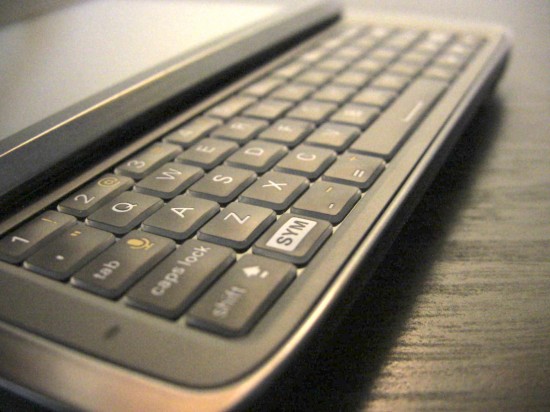 Because this is a Droid phone, we should dedicate a special section to the ever-improving keyboard. I am on the record as someone who actually liked the original Droid’s keyboard and missed the D-pad when they did away with it, but I can’t deny that Moto keeps making this thing better and better. The Droid 4 carries over the five-row QWERTY from the Droid 3, dedicating a full row for the numbers and other symbols. The layout is the most similar to a computer keyboard yet, carrying over many of the same keys and leaving them in their familiar places. 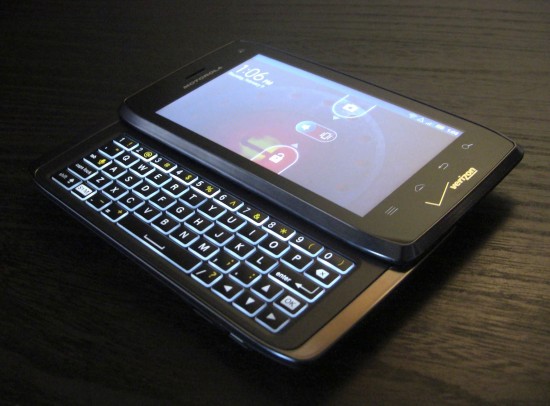 Keys are isolated (no membrane keyboard) and each press results in a satisfying click. Ample spacing really lets the thumbs fly without much fear of hitting the wrong key, but you will need to adjust your strokes slightly. The whole keyboard feels a bit off-center. The left-hand thumb needs to reach out a bit to hit the space bar. In fact, most keys seem shifted just a bit too far to the right. After getting used to the layout, this shouldn’t be a huge problem.

In the software department, the Motorola Droid 4 again takes plenty of cues from the Droid RAZR. The phone runs Android 2.3.6 with the most recent version of Motorola’s custom interface on top. Nothing is incredibly new about the interface, which should be immediately recognizable for anyone who has used a recent Motorola handset. There is enough in common here with other Android interfaces that things won’t feel too foreign to most users. What you get is Moto’s custom look with a selection of widgets for social networking, favorites, and more. You will also find two features Motorola is emphasizing in their latest product releases, Smart Actions and MotoCast.

Smart Actions are designed to automate certain functions in order to achieve things like better battery life and profiles for home and work. For starters there is a list of pre-defined actions, but new ones can be created based on specific criteria. The phone will also learn from your interactions with the handset and suggest new automations. Turn your WiFi off every time you leave the house? The Droid 4 will suggest a Smart Action that uses GPS to detect when you leave home and then automatically switch off WiFi. We’ve seen the functionality in previous third-party apps, but the ability for Moto’s app to learn new actions makes it particularly intriguing.

MotoCast is Motorola’s version of a personal cloud. You set up the devices on your network by installing certain software and designating shared folders to gain access to your files from your mobile or vice versa. You can share audio, video, and photos directly or share files such as Word documents or PDFs. Forgot to forward that important spreadsheet to your work email? Grab it via MotoCast. It’s pretty simple to use and depending on network speeds quite fast.

Motorola’s stock web browser isn’t the fasted we have ever used, but on the Droid 4 there were no complaints. It was able to quickly render web pages and scrolling showed little lag. Particularly impressive was the phone’s ability to play a YouTube video within a page’s content while scrolling and zooming the page. The video didn’t skip a beat.

Other included software ranges from Blockbuster to a demo for Madden NFL 12, which looked great and ran smoothly. There does seem to be an abundance of pre-installed applications, which some users won’t mind and some will take a distaste to.

Overall the software didn’t do much to blow us away, but it felt solid. Things worked how you would expect them to work and were helped along nicely by the phone’s strong hardware. 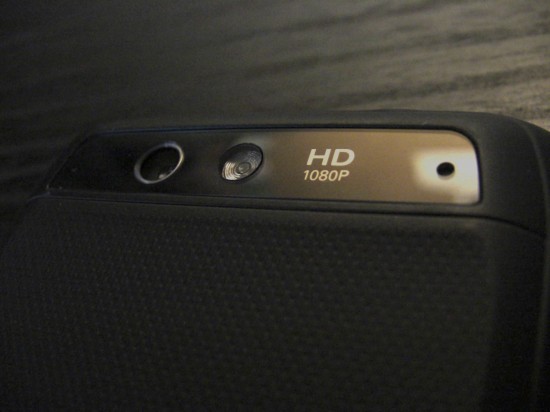 The Droid 4’s camera was surprisingly impressive. After a bit if fiddling around I managed to snap off a few nice shots. The 8MP camera doesn’t knock you over with its quality but the images had a certain look to them that was aesthetically pleasing. Pictures were snapped almost instantly and the phone’s auto-focus did a pretty good job of reeling in the photo’s subject. 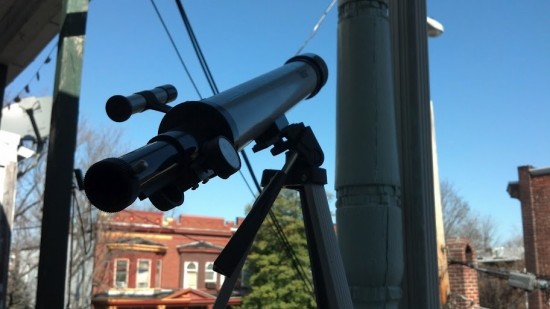 The camera features a macro mode among others plus a selection of effects to spice up your pictures. Also included were modes for panorama, multi-shot, and timed photos. 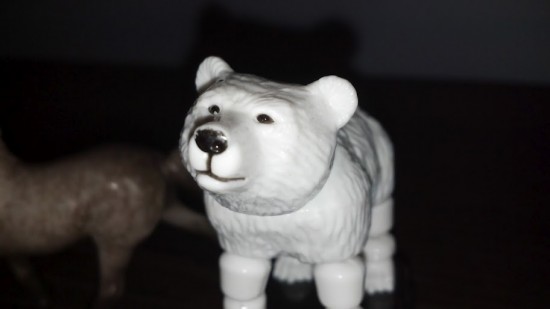 Video left a bit to be desired, but its 1080p quality at 30fps was more than adequate. Don’t expect the Droid 4 to become a go-to HD camcorder, but for capturing a YouTube video or one of life’s random events it gets the job done.

Is this the best Droid yet? In many ways, yes. But it won’t revolutionize the phone landscape in the same was as the original. The phone doesn’t feel quite fresh enough to get us raving about it, but it doesn’t do much wrong at the same time. Given its similarities to the Droid RAZR, many will want to compare the two and see which is right for them. For the text addict that isn’t too concerned about having a thicker phone with a bit more heft to it, the Droid 4 is just the ticket. For those looking for something with the same functionality but in a thinner form factor, the RAZR may be a consideration. The QWERTY Droid has become a stalwart of Verizon’s line and looks to be a real workhorse in its latest revision. We’d like to see a bit more innovation with the form factor on Motorola’s end, but the Droid 4 proves that the line is here for the long haul.