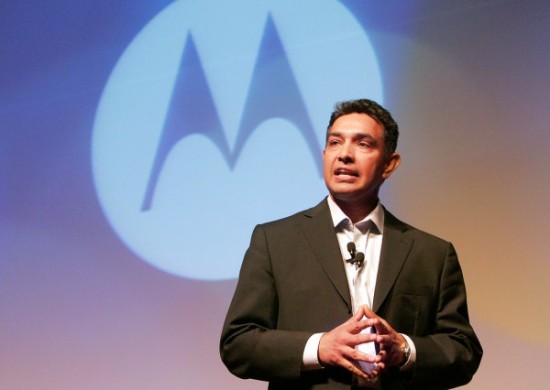 Early this morning, Motorola’s CEO Sanjay Jha spoke at the Oppenheimer Annual Technology and Communications Conference and where he addressed the company’s past, as well as the company’s future.

Motorola spoke a good amount on the company’s intent to streamline their global branding by taking a more “Samsung style” approach in terms of creating a worldwide flagship device. This would in turn create marketing efficiencies for the company thus, saving them loads of money by focusing less time on fragmented releases in different markets. Kinda makes you think about how much money Apple saves in marketing dollars by creating a single flagship phone every year that they launch all over the globe (just my 2 cents).

What was particularly interesting was the absence of any talk/hype from the keynote on Moto’s upcoming Droid Bionic release. Although, Sanjay did briefly make mention of the device calling it, “only a product.” that left many scratching their heads. Not sure exactly what he meant, but it sounds to me like Moto either quite frankly didn’t give a damn about the device, or maybe they have bigger and better things planned for the rest of 2011? Strange.

Sanjay also talked to attendees about the Motorola XOOM and told everyone to expect new tablets in the second half of the year with more “aggressive” form factors and unique enterprise capabilities, as well as the company’s new focus on cheaper, WiFi only tablets versus the pricier 3G/4G models that never really left store shelves.

To finish up the keynote, when asked about the company’s future with Android and if Motorola would once again focus on being the first OEM to the latest version of Android (Ice Cream Sandwich), Jha seemed to beat around the bush saying,

“It depends. I would say by and large I would like to be the first but there are times when being the first to launch has greater schedule uncertainty. You are taking more chances with new innovation in the beginning and sometimes that has negative impact. By and large, largely it’s a very positive thing.”

What did you guys take from this keynote? As Android users, are you excited about the future of Motorola? Or are you moving on to other manufacturers?