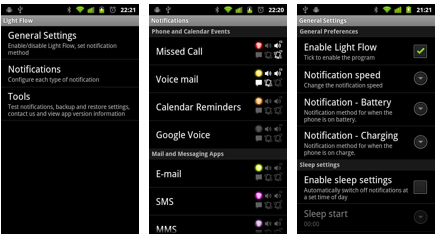 I’m probably not the only one who has been annoyed by the lack of flexibility when it comes to today’s notification lights inside smartphones. Back when I had a G1, I could access a vast array of colors. Apps could tap into the LED light with ease and allow you to choose exactly which color you wanted LED notifications for that app to be. Now, you’ll get one or two colors, depending on if your phone has a low battery or not – green or blue for a notification, or red for a low battery.

Light Flow looks to change that, allowing you to take control of notifications for tons of different applications. Now, you can set that bright blue blinker exclusively Twitter, green for Facebook or whatever configuration you want that the application supports. It won’t let you apply custom configurations for any old application from the market, but the paid version unlocks a nice palette of apps, some of which you most likely use.

The downside is that you may need root to get things going on certain devices. In particular, HTC has locked down the permissions for LED control in their Gingerbread builds so you’ll need to be rooted in order to allow the application to change those permissions.

I’ve tried it on my EVO 3D – it did require root – and it worked great for the couple of applications I tried it with (SMS and Google Voice). It can be daunting at first but you’ll come to appreciate the amount of flexibility you’ll get with the sheer amount of options afforded to you.

Unfortunately, HTC, Sony Ericsson and Motorola phones are probably the only ones worth trying here. LG and Samsung phones absolutely do not work, and other OEMs may need special support. Contact the developers and they’ll see if they can add support for your particular device in future updates. Give the free application a shot (limited amount of applications) and see if it works out well for you. If it does, grab the full version for $1.23 in the Android market.