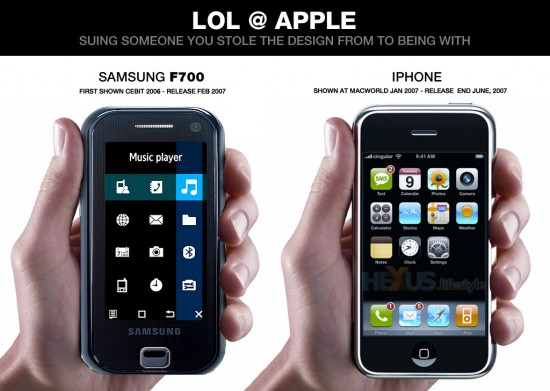 Take a look at this picture. Take a good look at it. On the right? an iPhone. (I’m not sure which revision, really.They all look the same to me.) On the left? Well that’s a little fellow from Samsung known as the Samsung F700. The image alleges that the phone was announced in 2006 and released in February 2007, but only the latter is fact. The iPhone was announced and released in 2007.

So that begs the question: who’s really stealing from who? (If you didn’t know, Samsung is being sued by Apple for the Galaxy S’ resemblance to the iPhone.) Samsung clearly had something going with this design way before they thought up the Samsung Galaxy S and before we even knew of the iPhone’s existence. And the user interface isn’t looking too much different form iOS, either. (If we’re just talking about grid-based layouts.)

And all of the same applies to Samsung and any other OEM. This image should serve as a good reminder that with innovation comes imitation. A standard is always set and manufacturers will always look to meet or surpass that standard. Apple can’t go around suing everybody because their phone was the first one that looks like it to be successful. Fall back, Apple – you really have no case here. [Thanks, Suriv!]

PS: Feel free to use this as ammunition in your court battles, Samsung – we’re on your side.

[Note]: Yes, we’ve seen the debunk article at Apple Insider. Even if Samsung did release the F700 a month after Apple showed the iPhone, it takes months for a design of any product to be finalized. Unless Samsung had some insiders at Apple leaking design information and documents, then it’s not right to say that the F700 copied the iPhone.