Since I’ve played with the Motorola XOOM, LG Optimus Pad, and Samsung Galaxy Tab 10.1, I’ve quickly become an Android Tablet snob. And by that, I mean anything less than Android 3.0 just doesn’t seem worthwhile. Today HTC announced their first Android Tablet, the HTC Flyer, and I wasn’t impressed.

HTC has been an Android powerhouse, not only competing with other manufacturers but often setting the bar and blazing the trail. In terms of Android Tablets, Motorola, Samsung and LG have left HTC in the dust. Their hardware isn’t necessarily better… it’s just, Android 2.X on a tablet now seems forced and unnatural after you’ve experienced Honeycomb.

Although I prefer 10-inch tabs, the HTC Flyer hardware is actually pretty good. Some of the key specs include:

It isn’t the hardware that falls flat, on the contrary, HTC is one of the most solid manufacturers out there and all of their MWC announcement are solid on the hardware side. But the software. It was noticeably laggy, slow and just didn’t feel right. 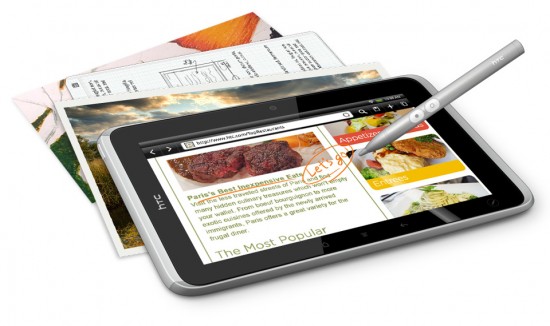 The Flyer also comes with a Stylus and a “Scribe” button which only works when touched with the actual pen/stylus itself. HTC has baked a bunch of features into Android for use with the stylus, allowing you to draw pretty much anywhere, save and share pics, sync them with Evernote, along with a bunch of other functionality.

Even with HTC Sense optimized for tablets and these unique features, the HTC Flyer falls flat. I can’t see it performing too well in terms of sales either: why would you buy the Flyer when you could buy the XOOM, Optimus Pad, or Galaxy Tab 10.1?

At CES and other events the most prevalent Android product has been crappy Android tablets. Anyone and everyone was slapping Android on a big screen and calling it a day. By no means would I classify the HTC Flyer as “crappy”, but I’ve come to expect cutting edge products from HTC and this particular device just seems a generation too old.

It’s a shame, too, because there isn’t even an Android 3.0 Tablet available for sale yet and it’s already making predecessors obsolete. Before the HTC Flyer launches it already seems old. I’d suggest HTC either wait to release and ship it with an upgrade or cut their losses and shelve altogether.