Minutes before Google’s Q4 2010 Earnings call a bomb was dropped… Eric Schmidt would no longer be the CEO of Google and co-founder Larry Page would be taking over. Talk about dropping a bomb. I quickly turned on the live webcast and threw together my thoughts while listening.

Eric Schmidt has done an amazing job as Google CEO so this move puzzled me. Was Eric Schmidt effectively resigning and transitioning the company over time? Not likely- Schmidt just published an article in the Harvard Business Review discussing how he hopes to work at Google for a long time. Then he made a post on the Official Google Blog promising to, “merge Google’s technology and business vision brilliantly.” And this was made even more concrete in the Earnings call when they pitched this as a strategic approach.

Larry Page says of Eric Schmidt, “The results speak for themselves. Nobody else could have done it better,” in discussing Schmidt’s tenure. Schmidt discussed how he’ll move from focusing on much of the internal strategy and begin working on external issues like partnerships and government, saying of the new CEO, “Larry is ready,” and “His ideas are clever.” 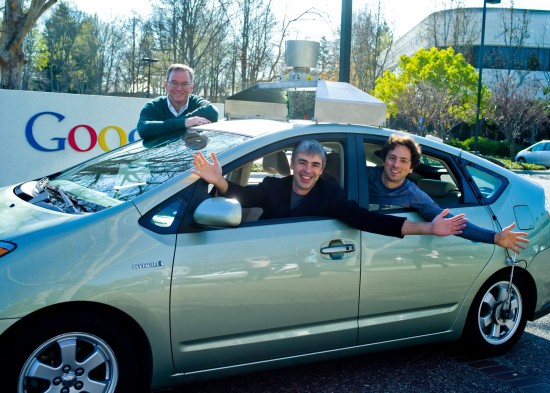 I got the idea he was clever. The dude created Google.

Went put in this perspective – Schmidt moving focus to external factors with Page working on internal strategy – it makes much more sense. Google will face increased scrutiny with government and regulators as they grow even larger and into more areas. They’ve got Google Search, Android, Chrome, Google TV, Maps and there is no doubt they’re trying to stick their hands in as many strategic pots as possible. For example, there are a LOT of things they could be doing with Google Voice.

Schmidt was actually asked this very question and he mentioned how they’ll be careful with each issue, admitting it will be a growing focus of his efforts. If Larry Page can help the company make quicker decisions internally, and Schmidt can focus on handling the growth with partners and government, than perhaps this is a very well crafted strategic move.

If you think there might be something more to this – as I did when I first heard the news break – perhaps you want to replay the call and listen to Eric Schmidt talk about his excitement to work more closely with his “best friends… Larry and Sergei”. Yeah, I don’t think anything funny is going on here.

Details of the move can be found on the company’s Investor Relations Press Release. A great blurb from that release:

Commenting on these changes, Eric said: “We’ve been talking about how best to simplify our management structure and speed up decision making for a long time. By clarifying our individual roles we’ll create clearer responsibility and accountability at the top of the company. In my clear opinion, Larry is ready to lead and I’m excited about working with both him and Sergey for a long time to come.”

Larry said: “Eric has clearly done an outstanding job leading Google for the last decade. The results speak for themselves. There is no other CEO in the world that could have kept such headstrong founders so deeply involved and still run the business so brilliantly. Eric is a tremendous leader and I have learned innumerable lessons from him. His advice and efforts will be invaluable to me as I start in this new role. Google still has such incredible opportunity–we are only at the beginning and I can’t wait to get started.”

The live stream seems to have sputtered out and refuses to load, but the bulk of my immediate interest was based on this huge announcement. We know they’ll announce some amazing numbers in relation to Android – that’s obvious – and we’ll bring you that info. But for now, I’m confident the CEO shift is nothing more than a strategic choice to allocate internal and external decision-making for optimal efficiency.

Sleep easy, Google-lovers, cause in Boondock Saints form I’ll ask you, “Where is Eric Schmidt going?” (Answer: NSFW but HERE if you’re interested)

I’m curious what YOU think of this announcement?