Eagle-eyed Dave – someone who keeps his nose close to the Android gaming scene – was browsing through GameLoft’s catalog one random Thursday and discovered something odd: new titles. Among them were Real Golf 2011 HD, Fishing Kings HD, GT Racing: Motor Academy HD and Guitar Rock Tour 2 HD. Naturally, we’d think “yay, new games!” But going to purchase them shows that they don’t exist. Odd. So we may see these games sometime soon, but at the same time, it could’ve just been an odd mistake: these could just be iOS titles. We’ll hope for the best and keep on the lookout for their reemergence. [via Droid Gamers]

David Ko from Zynga – throughout his enthusiastic attempt to enlighten us on the future of social gaming at the LeWeb conference in Paris today – let loose that Mafia Wars would be seeing an Android release before the end of this year. Ko’s dedicating to bring popular Zynga games like Mafia Wars to Android was just a natural move he wanted to take when he started there as senior vice president of mobile, he notes. Zynga’s already rumored to be bringing Farmville out for the platform, but perhaps now that Ko is behind the wheel we should see that before too long, as well.

During a press conference which Rovio streamed live today, they announced “Bad Piggy Bank”, their in-game payment system for titles (such as Angry Birds) which will allow you to do things such as removing the ads on Angry Birds or buy the “Mighty Eagle” update that is on its way. The platform won’t just be exclusive: they’re looking to offer it to any developer who needs an in-app payment solution on Android. (A void Google has failed to fill.) 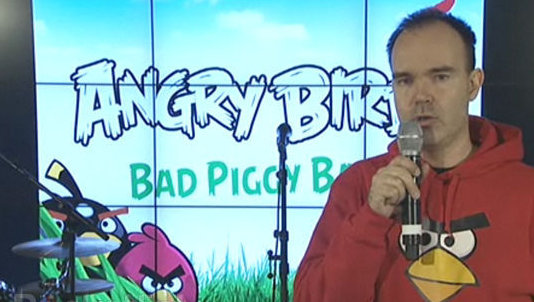 Bad Piggy Bank allows users to pay for content through the advent of carrier billing, something we hope to see for the Android market someday. “I think that the payment method up to now has been less than perfect,” says Rovio’s Peter Vesterbacka. Don’t say it with hesitation, Pete (Can I call you Pete?): we wholly agree.

We won’t see it much outside of Finland for the time being, but as Rovio inks deals with carriers around the world, you can expect it to be out in as many markets as one can imagine. Angry Birds has now been downloaded on Android over 10 million times. [via TechCrunch]