Oh. My. God. I cannot keep up with the flood of news regarding the Nexus S and Gingerbread coming through our ship’s lower deck, as of late. But we’ll fight through it! Another hour has gone by and even more tidbits from the blogosphere have trickled in. Firstly, how about something tangible from the SDK image to get onto your current non-Gingerbread phones? 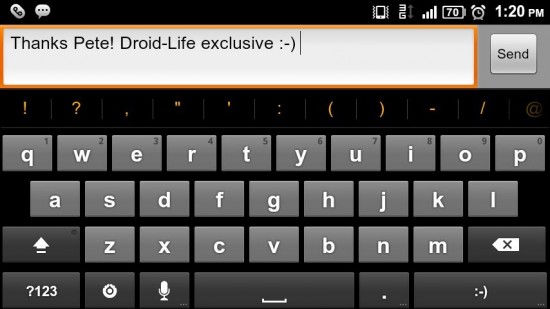 Droid-Life’s been able to grab the new software keyboard seen on various videos and pictures. While it still isn’t the best looking keyboard we’ve ever seen, it looks to be a huge improvement over the old stock offering. Peter Alfonso – the man behind the fabled Bugless Beast – has thrown the .zip file up here. (Yes, this means you do need to be rooted, and due to integrated Voice Search controls, you’ll need Froyo. Proceed at your own risk.)

1. Download .zip file HERE2. Place on root of SD Card and boot into Recovery.3. Install .zip as you would themes etc.4. Reboot and select “Android Keyboard” under Input Method and you are good to go.

*Note* – DX users, “In Clockwork, go to mounts and storage>mount system and then back to install .zip from sd card”.

In other keyboard news, it has been discovered that the KeyEvent class in the Android SDK has new-found support for what looks to be gaming buttons. (A, B, C, L1, L2, R1, R2, Start, Select, X, Y, and Z.) Sounds pretty darn convenient for the folks at Sony Ericsson who are to be bringing out a new device (which they aren’t calling the PlayStation Phone) with a gamepad.

Awesome! Android Police has also taken the new build for a spin in their emulator. Our friend Artem states that the Gingerbread’s emulator instance is staggeringly slow compared to Froyo’s and Donut’s, but we hear that this is the fastest version of Gingerbread yet. Could just be an issue with the emulator or SDK image. Go ahead and check it out over there for the full suite of images and accompanying impressions. 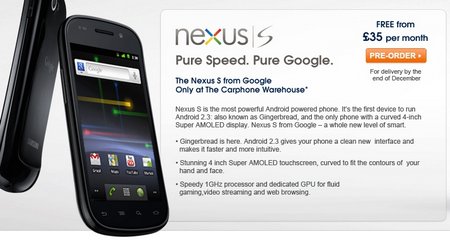 Europeans – specifically those in the UK, for now – will be happy to know that Carphone Warehouse is carrying the Nexus S starting at the end of December. And unlike us poor souls here in the states, you guys can grab it up for free on a 35 pounds per month tariff from either Vodafone or T-Mobile, tethered to either or for two years. If you’d rather not deal with that, you can always get the device for 549 pounds.

AT&T users will be sad to learn that their Nexus S won’t be 3G-enabled, according to tnkgirl who was retweeted by John Gruber of Daring Fireball. For now, we’ll just assume they mean this T-Mobile version will only work on AT&T’s 2G network. We’ll be digging for more information as the days move on.

And finally, Samsung’s come clean regarding the “Nexus S” and why they didn’t go with Google’s first naming suggestion, the “Nexus Two”. Their reasoning? “We don’t like being number two.” That’s very understandable, and judging by the reaction from our user community here at Phandroid, we can tell that many others don’t consider it a “number two” either.

If another wave of Nexus S news comes in between now and the next couple of hours, we’ll report it in similar style.