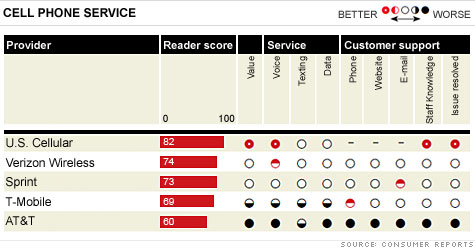 A new Consumer Reports survey released today pit all of the United States’ major carriers against each other for customer satisfaction, support and technical service (quality of network). To top the list was US Cellular who was listed as the nation’s best wireless carrier for cost and with a great voice network. They also ranked best in two customer support categories – issues resolved and self knowledge – but were unranked for phone, website, and e-mail, for some reason.

Verizon and Sprint were a bit even in terms of service and support, but Verizon naturally got the better rank for their voice network. And surprisingly enough, folks consider Verizon’s value to equal that of Sprint’s. We’re surprised because folks think “big money” when they think of Verizon, but it would appear that every bit of their service justifies the cost of admission.

What’s most interesting about AT&T’s ranking is that more than half of their customers were iPhone owners, giving good credence to the belief that a Verizon-based iPhone would do a lot better than what AT&T’s accomplished on their “perceived” worst network. AT&T’s Fletcher Cook had the following to say:

We take this seriously and we continually look for new ways to improve the customer experience.

But US Cellular remains the standout here: in just a year’s time, they’ve gone from the regional carrier who many have never heard of to an up-and-comer who – should they finally provide service in every continental state – could find themselves in direct competition with the likes of AT&T, Verizon, and Sprint. They’ve certainly gotten our attention after a storm of Android devices released by them, and with the promise of many more to come, we’ll be watching them just as closely as the other four. [via CNN Money]