Will 8pen Bring About a Revolution in Software-based Character Input? Unlikely [Opinion]

In today’s technology-driven society, kids are growing up learning how to use technology to their advantage and adults are incorporating more of it into their lives. Like anything, once you get used to a certain standard, it’s hard to (or, more accurately, hard to want to) adopt anything else. More than anything, the QWERTY layout for English-speaking typists has proven to be quick to learn, easy to remember, and very efficient for character input. (And not because that’s how or why it was designed.)

The layout first appeared on typewriters where it was necessary for certain letters’ typebars to be as far from each other as they could be to be sure keys don’t accidentally strike each other. (These certain letters were ones used most often next to each other in a word, which is why the layout is top-heavy with vowels and bottom-heavy with consonants.)

But you don’t care about all of that. You care about the fact that it translates to a remarkable typing experience and you’ve never known anything outside of it. Not even Dvorak’s supposedly speedier layout could get you away from QWERTY.

That’s why I approach 8pen – a new software “keyboard” for mobile phones – with hesitation. (It’s more accurate to call it an input mechanism, than anything.) Go ahead and watch the video above to get an idea of what 8pen is all about and how it works. I’m not trying to say these folks haven’t created something worth trying – nor am I saying it isn’t interesting or original – but I just don’t think many people will stray too far from their comfort zones.

“What about T9,” you ask. T9 was invented because – at that point in time – there’d been no other choice on a device without a full set of keys. Most mobile phones in those days came with 10-number keypads while only the top-tier devices – namely PDAs – were graced with a full QWERTY keyboard. And the idea behind T9 and why it was needed differs greatly between a jump from QWERTY to something like 8pen.

Now that we have phones with large touchscreens and even low-end offerings with physical keyboards, the need to reinvent the wheel is not there. Even a phone whose screen isn’t large enough to comfortably type on with a software QWERTY keypad will allow you to revert back to an on-screen T9 experience, and that’s still good enough for a lot of people. (And I won’t even mention the more-than-adequate half-QWERTY that’s become quite the popular accommodation.) 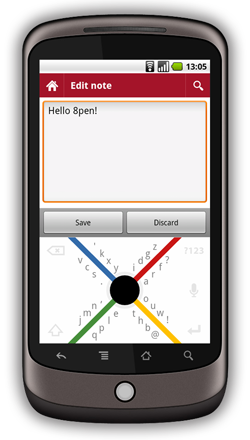 And then we have Swype, which is gaining popularity each and every day. “Swype changes the fundamentals, doesn’t it?” No, Swype simply builds on an already-established norm. Combining the familiarity of QWERTY with the seemingly mind-reading nature of T9’s prediction system and the human’s natural intuition desire to swipe back and forth on a touchscreen, Swype starts feeling more like a natural extension of the software QWERTY experience.

BlindType has gained a lot of recognition lately, too, but not because it changes the fundamentals: it simply makes it easier to type on a layout we already know and love. That’s the single biggest thing people love about these two offerings. Is 8pen DOA? No. I think it will garner a lot of attention simply because of how unique it is, and a lot of people might fall in love with it. (Even some of the oddest of oddities attract fans.) But don’t expect carriers and manufacturers to rush to their table to strike up deals to include this on phones.

Having said all of that, I’m still excited to at least try 8pen out when it launches for Android 2.2 devices tomorrow (1.6+ support coming soon.) Who knows? I might even fall in love with it, but I wouldn’t count on it trumping my love for the comfortable typing experience on a layout I’ve grown up using that hasn’t posed any problems for me thus far.