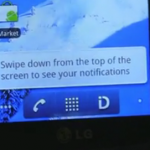 Providing an in-depth review of Sprint-ID is somewhat of an ironic oxymoron- the feature exists to provide Android beginner’s with a simple, non-obtrusive, out-of-the-box way of getting the content and apps they want on their phone. By all accounts, readers of Phandroid are (mostly) on the knowledgeable end of the Android scale and don’t have to do all the digging and researching- you already know what you want and you follow Phandroid to see what you’ll want next.

But what about the 65-year old retired guy who is about to embark on post-career golf frenzy? How about the 45-year old mother who just became an empty nester? Or what about the 15-year old text messager who has never had a smartphone and isn’t exactly Android obsessed? Where do they start?

You COULD tell them to start with Phandroid.com, and we’re developing some interesting features for people like this in the near future, but Sprint is being proactive in welcoming a new breed of smartphone user to the Android world and I’m all for it. The Sprint ID service is launching on three new phones the carrier is offering: LG Optimus S, Sanyo Zio, and Samsung Transform.

My favorite of the three is the LG Optimus Z, but check out my thoughts on Sprint ID while I overview each of the three phones:


Sprint-ID is a starting point. It’s a way for Android beginner’s to get started on a new world they want to explore and discover. So let’s dive in and show you how Sprint-ID will help these new users navigate the smartphone seas with a little more ease.

At the launch event, various partners showcased their implementations of Sprint-ID which we’ve captured on video and shared below. Perhaps the most powerful feature of Sprint ID is that it will be available for developers to create their own implementations, extending Android into an infinite simplicity. When users are ready to graduate to less of a hand-holding experience… they can to it at their own pace.

Sprint ID for Education with Loyola University in Chicago
The folks at BlackBoard teamed up with Loyola and I was very impressed with the Sprint ID pack in this instance. With a few swipes and presses, your phone is all set up to get grades, read class notes, grab your schedule, see assignments, read notifications from your professor and more. Really like how this could help keep you organized with almost no effort.


Sprint ID with Yahoo
Maybe you prefer Yahoo to Google on your… Google Android Phone. To be honest, I actually really enjoy Yahoo’s Home Page, especially their featured news section. My infatuation mostly ends there, but if you want Yahoo Finance, OMG, and all the other Yahooness on your Android – look no further.


Sprint ID and the Bi-Lingual Community
First of all I have to say I’m jealous of folks who can speak multiple language and it makes me feel rather foolish (read: like an obnoxious American) when a native-XYZ speaker effortlessly uses English to communicate with me while I’m in a foreign country. But while in America, how can these people use their mobile device to stay connected with their background and culture? Here is one way:


Sprint ID Pack from Where
Sarah from Where shows off their version of Sprint ID that totally Where-ifies your phone. For folks who want a location aware things-to-do-and-see-and-eat phone might find this impressive.


Again, that’s a rather in-depth look at Sprint ID – later on I’ll be performing a more simplistic review using the Samsung Transform to give you a direct look of the ins-and-outs, explaining what I like and don’t like on a micro level.

But in terms of concept? I think Sprint ID is a great idea, and if you take your own desires OUT of the equation and look at the service as an opportunity for beginning Android users to get the most out of their phone (out of the box), then I think you would have a hard time disagreeing.