LG’s beating everyone to the punch in announcing plans to bring the first smartphones based on NVIDIA’s Tegra 2 dual-core, 2GHz CPU platform by the end of this year (Q4, broadly put). No phones have been named – so it’s not even known whether or not their Android lineup will be included – but they did single out the “Optimus” brand which we know to be housing Android these days. 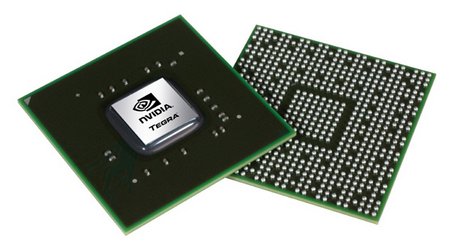 The chip will not only bring about a beefier CPU than we’ve ever seen before, but a GeForce low-power GPU that should be able to handle any mobile game with ease (and even has the ability to produce console-like graphics, era pending). Let’s not forget 1080p HD video playback and everything else  that comes along with Tegra 2.

We’ve heard about other manufacturers pairing Android with Tegra 2, but never for a pocketable smartphone – only tabletss and netbooks, to date. The chipset war will only get more fierce from here as Qualcomm, Samsung, and other vendors come to market with their own offerings and as we start seeing manufacturers put them into their high-end devices. It could even make a 1GHz platform a standard for mid-ranged offerings if the devices yet-to-come explode in adoption. Read on for full press details.

LG First to Announce Smartphone with Dual-Core CPU based on NVIDIA Tegra, the World’s Most Advanced Mobile Processor

LG will integrate Tegra 2 into its smartphones, providing them with unprecedented power, speed and graphics capability. These smartphones will be part of LG’s Optimus Series, a new line of innovative mobile products.

“LG is committed to making its Optimus Series smart devices the de facto standard in speed and graphics performance,” said Chang Ma, Vice President of Marketing Strategy Team, LG Mobile Communications Company. “We selected NVIDIA because it is the visual computing leader and has a long history of creating amazing consumer experiences.”

“The ultimate smartphones will be powered by Tegra, the world’s most advanced mobile processor,” said Phil Carmack, senior vice president of NVIDIA’s mobile business. “LG is one of the most popular consumer brands, and their Optimus Series of devices with Tegra is further validation of the processor’s ability to deliver an unrivaled, turbocharged media experience.”